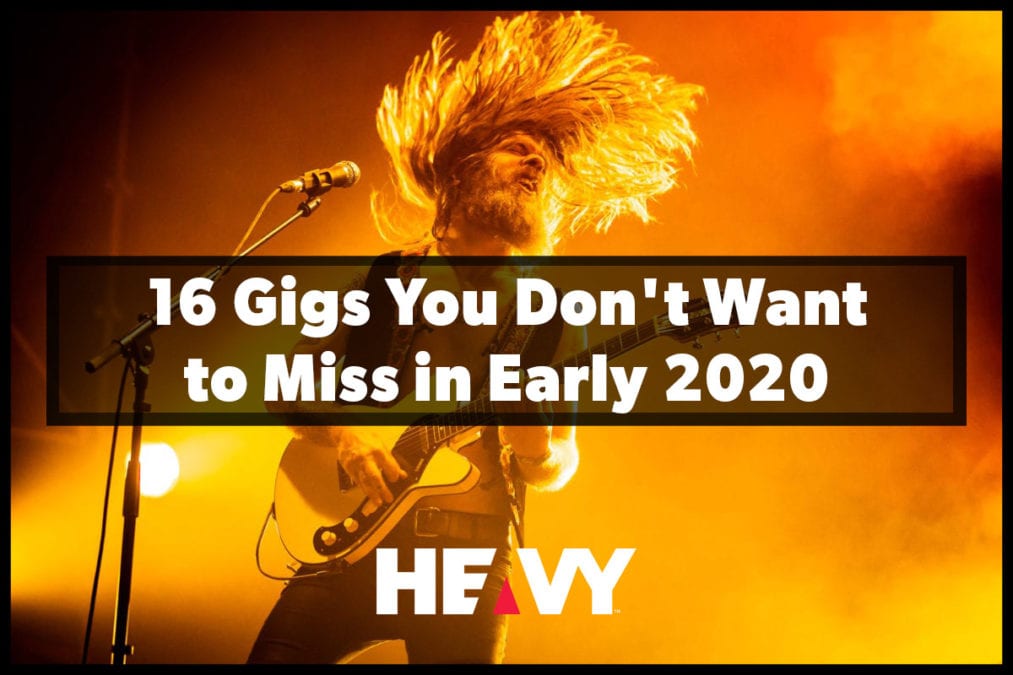 From all of us at HEAVY Magazine have a very HEAVY NEW YEAR and may 2020 be the heaviest of them all!

As you are probably quite aware tomorrow is the first day of 2020; it’s a new year and a new decade and that means a new year of amazing heavy music bands coming to town!

Over the last years, we’ve seen the return of heavy music festivals with Good Things Festival and Download Festival entering the grounds and UNIFY Gathering running as strong as ever as well as Under The Southern Stars with a dominating line-up.

With each offering different genres and musical tastes, there’s sure to be something in these three festivals alone to satisfy your 2020 thirst for music:

Plus Download Festival Australia have some sideshows for those cities not on the circuit: Deftones, Ministry, In Flames Testament, The HU and Carcass!

And of course, there are the international goodies Download Festival UK, Hellfest, Wacken and Bloodstock too drool over…

In order to reduce the flavour of favouritism we’ve put together this list of sixteen not to be missed gigs before May 2020 in alphabetical order.

The great man, Alice Cooper, is returning to Australia so we got one of our righters along to check out his new show in October at O2 Arena, London, UK. If that’s anything to go buy Alice and his band have something special to bring! And of course, there’s shredder Nita Strauss… if you needed another reason…

It’s been more than three years since the Metalcore Godfathers last toured Australia but in February 2020 we will see the return of Atreyu.

After a very beastly Australian visit in 2019, including sold-out shows at the Gershwin Room in Melbourne, New Zealand’s Beastwars return to Australia in February 2020 for a three-date East Coast run.

Having been already announced for Download Festival 2020, CARCASS are now set to carve up the rest of the country, with a selection of sideshows added!

Southern Rock legends Corrosion of Conformity return to Australia and New Zealand in February 2020. After the success of their last album, No Cross No Crown on Nuclear Blast, Corrosion Of Conformity have been thrilling fans in Europe and the US and soon Aussies will experience what is going to be a killer set of shows.

Get Corrosion Of Conformity Tickets

If you don’t already know US band Integrity then let them teach you a lesson in ethics! Seriously, get along and see these fuckers. They are hardcore mad! Listen/Read the HEAVY interview with Integrity.

9. John 5 And The Creatures

JOHN 5 is undoubtedly one of the most dominant shredders on the planet and he is finally headed to Australia to shred before our very eyes next April for three very special nights. Listen/Read the HEAVY interview with John 5.

Germany’s Kadavar announced they are returning to Australia and New Zealand in March and April 2020! Kavadar are one of the hardest working bands around and drawing large crowds to every international show and large festivals such as Hellfest, Download, Psycho Las Vagas and Waken.

Best known for their 1993 metal/crossover New York‘s Life Of Agony built a die-hard, cult following attracting a wide fan base across the metal and hardcore genres. FINALLY, Life Of Agony are coming to Australia!

Get Life Of Agony Tickets

Obituary are headed our way for a run of shows early next year, paying tribute to their 1990 classic album Cause of Death by playing it in full. That album was the catalyst for the future musical direction taken by Obituary and remains amongst the fan favourites today. Listen/Read the HEAVY interview with Obituary.

This is a MUST SEE! But, it’s looking like a white-wash sell-out… so hi-diddly-ho you better lock it in! Nedel Metalers Okilly Dokilly will be on tour with Dr. Colossus in February.

One of Australia’s fastest rising bands in the metalcore scene is Polaris and rightfully so! Man, these young fuckers rock hard and their live shows are pumped with moshing frenzies. A must to be seen!

Already mentioned above but needed to be mentioned again is Mongolian rockers, The Hu. They are playing Melbourne and Sydney on the Download Festival bill but are also heading to Adelaide and Brisbane with sideshows. Listen/Read the HEAVY interview with The Hu.

Get The Hu Tickets

Last but certainly not least in any way whatsoever, two absolute legends of the early heavy metal scene, together for one night, Whitesnake and Scorpions!

They are the world’s best Iron Maiden tribute act (and only all-female act) and have proven this for a solid 19 years gaining international recognition as well as approval from Iron Maiden legends, Steve Harris and Bruce Dickinson. This is a must-see show for or Iron Maiden fans!

Get The Iron Maidens Tickets

Make sure you share the link to our Gig Guide on social media, messenger, SMS, phone calls, at parties, smoke signals, a message in the bottle? Whatever it takes to get people seeing these shows and into venues!

There are hundreds of other up and coming local artists you should discover in 2020. Grab ya mates, make friends at shows, and enjoy the talent. There’s no shortage of it!

Now that we have you hyped up about 2020  we have word there are some amazing tours yet to be announced but are waiting for confirmation on before mid-2020 are:

Again, from all of us at HEAVY Magazine have a very HEAVY NEW YEAR and may 2020 be the heaviest of them all!

PS. Tool didn’t need mentioning as most shows are sold out.. probably all will… should be good…