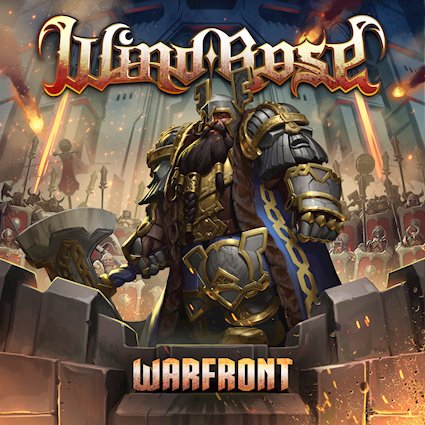 Did I just read correctly?

Wind Rose are being touted as power metal’s mightiest dwarves?

While I have no problem with that, I do find it a little strange that in this increasingly sanitized world people – and particularly the band – have no qualms with the label. Which makes me immediately assume that Wind Rose are a fun band and not one that worries themselves with the trivialities of this world.

So, I put my elf ears on and sharpen my broadsword before heading off into sonic battle in the form of Wind Rose’s new album Warfront!

The images swirling around my head are starting to consume my thoughts, so I hurriedly hit play and enter a world that promises action aplenty and even greater thrills.

Of War And Sorrow doesn’t carry me off to war as I’d hoped, instead laying the sonic platform for a bleak world that lay desolate, perhaps still bearing the scars of war.

It is a sweepingly epic opening track that leaves a sense of urgency despite its subtle nature.

Army Of Stone kicks in with more intent, the rise and fall of the musical instruments telling a tale with increasing tempo as the song progresses.

If he is, in fact, a dwarf, then Francesco Cavalieri has no trouble reaching musical highs as he surges into contention, an unseen authoritative force of nature that booms from within.

He seems to be setting the scene for an impending battle – whether that be with the elements, or an invading force is yet to be established.

Hopefully Tales Of War will answer that question, and it conjures images of bloody war with a rapid intro that throws you into the thick of whatever battle looms, underpinned by a subtle tranquility provided by keyboard player Federico Meranda.

There seems to be a sonic war raging on all sides and I already know who I am putting my money on.

Cavalieri provides the catalyst for a sweeping sonic landscape of clashing swords and damsels in distress, his voice acting as a weapon of war in direct opposition to the forces of evil that seek to invade.

Fellows Of The Hammer feels like a movie score version of Trolls. Not the loveable kids version, but the one where the troll hides under the bridge waiting in silence for unsuspecting travellers.

The deadly troll seemingly picks the wrong battle here as he (or whoever the bad guy is here) is repelled by wave after wave of vocal thrusts that barely raise a sweat in anger.

This is a long track, coming in at over 6 minutes, and is tempered somewhat about two thirds of the way through as the battle eases, possibly retreating to a higher plain from whence to reconvene.

Together We Rise – now there’s a dwarf song if ever I have heard one – is like a call to arms, increasing its delivery in increments as chanting fills the air.

It paints a hopeful picture before a battle cry rings out and flips things in the complete opposite direction.

It’s almost as though Cavalieri has suddenly grown into his leadership role and sets about inspiring his troops with moments of conviction and dominance.

I just realized that I am making my own battle movie out of this album and loving every minute of it. It’s almost like being given a blank canvass with the only outline deriving from a combative narrative.

Gates Of Ekrund snaps into gear before gentle synth-driven sounds hint at possible peace and harmony in the war-ravaged lands.

Cavalieri sings of blood flowing and no turning back so maybe the gentle nature of the music is in direct contrast to the violent nature of whatever is transpiring at said gates.

One Last Day sounds like there’s a line being drawn in the sand and in this scene of my rapidly developing movie a swarm of angry dwarves covered head to toe in armour are converging on the unseen enemy with a renewed spring in their step. Once more Cavalieri leads the charge and if his skills with sword in hand are comparative to his vocal prowess then I can suddenly feel the scales of battle leaning more in my direction.

The Battle Of The Five Armies throws a spanner in the works.

Five armies? I’m struggling to defeat one, so I saddle up once more, hoping for a miracle to survive the impending war.

Wind Rose must be able to sense this growing fear, as this song is vastly more foreboding than any that have come before, the urgency in delivery alluding to sensations of self-doubt that could quickly spread like a virus if left unchecked.

A prolonged interlude towards the back end of the song hints even more that the fate of many is in the balance before Cavalieri regains his mojo and gives renewed hope in the face of adversity.

I Am The Mountain reaffirms this stoic attitude, as faded drum beats simulate the marching of a growing army into an unknown fate.

It pulsates early as if in the throes of battle, pulling back and forth as each side struggles for ascendency.

You can feel the inevitable climax surging as the upper hand slowly stretches on the side of the dwarf army I now lead and as I approach the final track Tomorrow Has Come, I am quietly confident of victory.

Rather than the full-frontal assault I was expecting, this track begins with the ambiance of the night air, crickets chirping in the background before Cavalieri delivers what could be a tribute to fallen comrades.

It is a beautifully encapsulating number, despite being the polar opposite of how I envisaged the victory party to flow.

With minimal use of music, Cavalieri’s vocals are left to carry the overwhelming feelings of loss and sorrow, adding a more human element to what up until now had been a tale of conflict.

It is a poignant and moving way to close this chapter of dwarf versus goliath, even though in my tale, the dwarves left the battlefield feeling 10 foot tall.