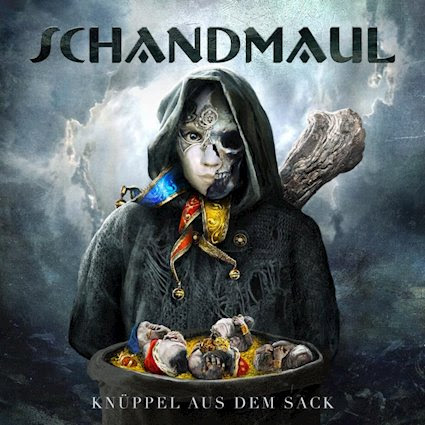 Here’s a new one for me. Medievil folk rock!

Seeing as though I have nothing with which to draw comparisons to here, I shall enter my private listening party for German outfit SCHANDMAUL’s eleventh studio album Knüppel aus dem Sack with a fresh sonic palate free of expectation.

All of the song titles are in German and I am guessing the vocals will be delivered in the same language so armed with my solitary German word – Schweinhund (google it) I relax as the opening and title track fills my ears.

It roars to life on the back of a surprising guitar solo before fading into distortion as the drums loom large and the music kicks in.

So far so great.

The album features a range of unexpected instruments, ranging from bagpipes to hurdy-gurdy to folk flutes and one of them makes an early appearance before vocalist Thomas Lindner launches into action, his authorative voice almost whispered – albeit harshly.

The vocal delivery is deliberate and unsettling, made more so by the constant stream of words and musings that I have absolutely no idea of their meaning.

This is where music transcends barriers. Bands like Rammstein have led the charge in the past and the early stages of this album have more than a passing sonic resemblance to some of that band’s material.

This song builds nicely, gathering momentum throughout the back end and laying a welcoming platform for the rest of the album.

There’s an almost carnival feel to Königsgarde as the violins almost trumpet the arrival of the second track, the strangely soothing vocals of Lindner conveying a passion that is as infectious as it is sweeping in its grandeur.

With an (almost) sing-along-chorus propped up by some more of the instruments that come from the folk side of this material, Königsgarde feels like a victory song but I could be wrong.

Das Gerücht starts with a spoken word passage that gives way to violins and up tempo percussion before regressing into a rollicking, swashbuckling number that leaves me suddenly wanting a glass of rum.

Add pirate metal into the mix here and SCHANDMAUL have introduced yet another string to their lengthy bow.

This is a fun song – although it could be telling a sinister tale – but something tells me this is the German Valhalla tune. Whatever it is, it’s definitely drinking weather!

Der Pfeifer starts in a similar vein, with what sounds like a flute providing the musical folly as Lindner goes off into another musical tangent of diverse proportions.

I have yet to feel overwhelmed with the folk element of this music, which is a good thing.

Don’t get me wrong, it’s there, but more as a subtle accompaniment to the controlled chaos rather than a domineering mistress.

Tatzelwurm has more of a fuzzy electric intro, the rhythmic pounding of the vocals acting as a rudder to the sporadic elements that envelop them.

Yet another epic chorus punctuates the sonic waves, giving the song a pulsating feel of anarchic intent that threatens to derail at any given moment. There’s more of the left of centre style of instruments weaving their way through the fabric of this number and although I have no idea what instrument that is I know I like it!

Der Flug sounds like the theme song to a cheesy 70s coming of age film before the flowery vocals of Lindner come in as narrator and conductor, linking the abstract instrumentalization with splatterings of verse that for this song play second fiddle.

And that’s one main thing that stands out thus far.

Every instrument – vocals included – are given room to breathe and flourish. There seems to be no hint of ego driven over-emphasis on the many elements that combine to provide such a vast sonic landscape, and this is where one of the main strengths of SCHANDMAUL lies.

If I had to guess Der Quacksalber would be an ode to ducks in some form, but it starts off more like Accidently Kelly Street with an innocent sweetness that changes the mood completely.

I have no idea what a Medieval folk ballad would sound like but surely this must be close? If it is, then it is a song where the main character gets the chocolates instead of losing the love of their life, so it is with a renewed sense of hope for the future I move on to the next song Luft und Liebe.

This opens to the sounds of a carousel measuring it’s away around an endless loop before the soothing sounds of violins interject and Lindner enters the realm of the cool kids with an annoyingly boppy tune that rises and falls on the back of traditional instruments.

If there was a fire raging outside with a bunch of lonely looking maidens kicking their heels, I reckon I would grab one by the hand and break into dance.

Glück auf! rolls in on a quick drum pattern before the violin starts chirping away with alternating guitar and soon turns into a fast paced bopping tune that seems to be told from two perspectives.

Both, of course, are cheery and I find myself starting to wonder if anyone in this band has ever suffered heartbreak.

The music is staggeringly cheerful and upbeat, with the usually harsh tons of the German language coming across more approachable than historians would have you believe.

A wicked violin/fiddle solo kicks in around the half way mark and I can honestly say I have never heard anything like it. Give me more!

Irgendwann starts with acoustic guitar before being joined by maybe a hurdy-gurdy? And the two battle it out while the song assembles itself around them.

The electric guitar also pokes its head in sporadically, filling out the track in parts while it empties itself out in others. In a good way.

Niamh starts with another instrument I won’t even speculate at, but whatever it is gives the song an almost heavenly feel that frolics along on its merry way, the whole time being driven on the back of an underlying guitar score that simmers mostly below the surface.

Der elfseitige Würfel breathes into being by the gentle sounds of flute that allow Lindner to ease his way into proceedings, the calmness in his voice an instrument in itself.

Although I am thoroughly enjoying my first foray into Medievil folk music my neck is still a little relaxed considering the album is 12 songs deep, so I venture on to the final track feeling refreshed by the experience without being violated.

Which I suppose is a welcome change of pace.

I knew I was onto something earlier when I likened this music to pirate metal, as Long John Silver gently caresses itself into being, a slow, rhythmic number that is (unfortunately) still sung in German despite having an English title.

This definitely is a folk ballad, ebbing and flowing in a tidal fashion amid the gyrating interludes of what sounds like a piano accordion but could be anything.

This track feels like the final chapter of a novel, wrapping up everything that came before THE END splashes across the pages in a pleasant finale where music is the winner and SCHANDMAUL the leading contender.