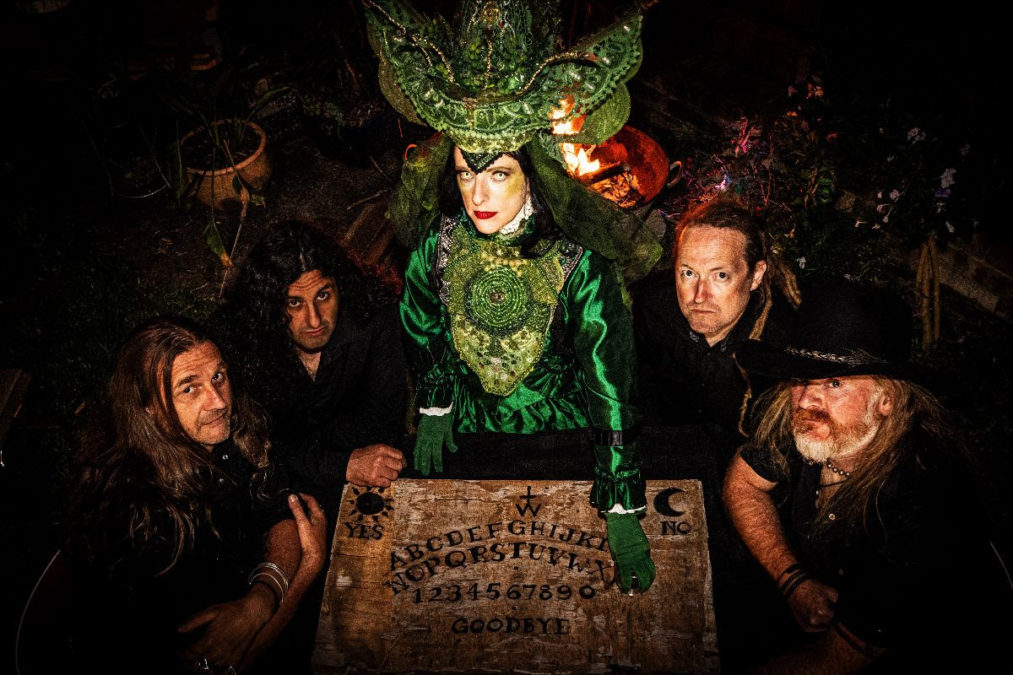 For those who do their homework on bands, The Neptune Power Federation are likely to cause problems.

The musical pedigree of their members lay in punk and extreme metal, indicating a sound somewhere between, but if you look past the surface you will find a different beast entirely.

A beast that is led by The Imperial Priestess, and one which has seemingly traversed the globe in search of musical conquest.

Combining a variety of 70s melodic hard rock sounds with a punk ethos and energy and psychedelic undertones, The Neptune Power Federation are a force unto themselves.

They are a visually stunning band, and one which shun the light in favour of the darkness, their epic tales of death and debauchery drawing your soul deeper into their abyss with each passing album.

With their fifth release Le Demon De L’Amour set to be released on February 14 – yes, Valentine’s Day – guitarist Inverted CruciFox joined HEAVY to take us deeper into the world of The Neptune Power Federation.

“It’s our fifth album so I think we kind of know our style these days,” he began. “It feels like a continuation although people are always commenting, they think we’re swapping and changing but I think we like to throw a lot of different things in the mix. So, from album to album there might be different things we throw in the mix, but that’s the one consistent thing I guess, there’s always a blend of genres which we like doing, all vaguely in the heavy rock family but sometimes outside of that as well.”

As with everything given life with The Neptune Power Federation, the fact Le Demon De L’Amour is being released on Valentine’s Day is no coincidence. Essentially an album of love songs – although told in a fashion that is not normally associated with the holiest of lovers days – Le Demon De L’Amour is dripping with depravity, providing the perfect outlet for The Imperial Priestess to weave her alluring spells.

“Well, it’s interesting actually because it’s been in the news lately,” Fox explained, “but poor old Meatloaf dropped off the twig, and I was listening to a lot of Bat Out Hell a couple of years ago and that got me thinking. I really like Jim Steinman‘s songwriting and lyrics and I thought it’s something that heavy bands don’t do a lot of these days, and we haven’t done a lot of either. When we were in the 70s they all had these epic love songs, and I’m really into that corner of the heavy music room, so I thought let’s go over and concentrate on that area for a little while, so that’s what we did.”

In the full interview, Fox talks about the songs as they relate to The Imperial princess, the overt subject matter and how it is approached, the two singles released so far and how they represent the album as a whole, the introduction of a new nemesis for The Imperial Princess, the early days of the band, their upcoming tour and more.

PrevPrevious.FRANKENBOK Return With A Vengeance
Next.The Upturn Of Society With DOWNFALL OF HUMANITYNext