FRANKENBOK Return With A Vengeance 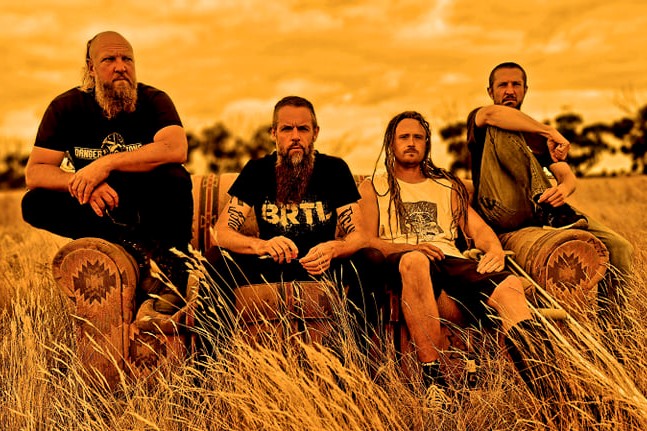 Despite the constant insistence of people in the modern age of music to put labels on things and try to fit bands into their own tiny corner of the market, most bands and music that you hear these days sound outdated. Or familiar. Or safe.

Too many bands are content to stick to the tried and true formula – not that you could really blame them sometimes – but as a result the danger has gone out of much of the new material that is presented to us at a rapid pace.

While some bands and fans are comfortable with familiarity, others look to constantly better themselves. They refuse to be pidgeon holed and, more often than not, are criticized for venturing too far from the path allocated to them by the masses.

For more than 25 years, Melbourne heavy machine Frankenbok have dipped their toes into a variety of styles and genres. Their albums have ranged from thrash metal to heavy rock to psychedelic influenced rock numbers, but they have all always had that identifiable Frankenbok stamp bubbling under the surface.

For most of their existence Frankenbok have been a five piece band, the dual guitar assault recognized as a defining part of the bands sound and direction.

In the space of the last three years, Frankenbok have parted ways with their original bass player – leaving Azza Bok as the only original member – and also trimmed down to a four piece, leaving Azza alone out the front on guitar. It is a changing of the guard that would have a negative effect on most bands, but Frankenbok have taken it in their stride and set about igniting a new chapter in their long and distinguished history.

Over the last two years, the band has busied themselves with their latest album, the follow up to 2017’s Viscious,Lawless. With Dan McDougall back in the vocalist position and Owen Spratling assuming bass duties, a renewed sense of purpose settled over Frankenbok, and with it a fresh approach to music.

Avoiding the usual sonic inspiration provided by metal bands, Frankenbok instead opened their minds to other genres. Australian rock, bands like Snot, bands that have their own market that certainly isn’t on the same playing field as the type of music expected from Frankenbok.

Which is a good thing.

On February 11 Frankenbok will release the culmination of those two years work in the form of Overdose, an album that should propel the name Frankenbok back onto the lips of music fans everywhere. It is an album that has it all – punk, rock, metal, even a bit of funk, but throughout still has that unmistakable fire only seasoned musicians can muster.

Dan McDougall sat down with HEAVY earlier this week to discuss Overdose and its long road to fruition.

We start by asking if he feels more relief, excitement or anticipation with the album almost ready to drop.

“All of the above,” he said quickly, “but probably more relief than anything. It’s always good when you finally get to the end of the cycle and this thing that you’ve been working on… it’s pretty much gone two years I suppose since we started the writing process. It’s crazy how you go from that period where there’s nothing, just a few riffs and then two years later you’ve got an album. That process is quite extensive and… oh man, there’s lots of things you have to go through to get to that point. It’s very much a relief to finally get it out there.”

As mentioned earlier, Overdose is not what most people would expect from Frankenbok, a point agreed upon by McDougall.

“No, it’s not,” he affirmed. “Although there’s definitely a flavour through it that’s always there. Aaron is the chief songwriter and on this particular record he pretty much put together all of the songs, which is sort of a first. Apart from back in the early days, from the period I was in the band Timmy (former bass player) was also another contributor, so they were almost even when it came to contributing songs for the record. This time around, Azza’s pretty much taken the reins. We’ve also got the fact that now we’re a four piece instead of five, which is a first in terms of putting out a record, and we’ve got a new bass player. That’s all added to this cacophony that we’ve created. It’s… every songs different. There’s a bit of everything across the board. It’s quite a bit of a journey to go on from start to finish. None of the songs sound the same at all. That wasn’t particularly a deliberate thing to do, it was just whatever Azza brought next to the table was the next thing we worked on. We just ended up with ten songs that all sound completely different. I don’t know whether that’s a good thing or a bad thing. I don’t know whether people who are stuck in a specific style of metal, they are gonna find that a little disconcerting to listen to or it’s gonna be a breath of fresh air, I dunno. For us playing the songs it’s great. They’re great songs to play and for me that’s number one importance is that we as a band enjoy playing the songs, and that’s each one of these. We’ve been jamming the shit out of them for the last year, and we’re not sick of them yet. We’re just keen to get out there and play them live. That would be nice (laughs). I dunno if we’re really a metal band. I don’t classify us as a metal band. There’s definitely a bit of a punk element to what we do as well. It’s a real mixed bag.”

In the full interview, Dan talks more about the songs on Overdose, the path to completion, how this is different to every other Frankenbok album, working with Luke Walton at Danger Tone Studios, writing the whole album lyrically for the first time and more.