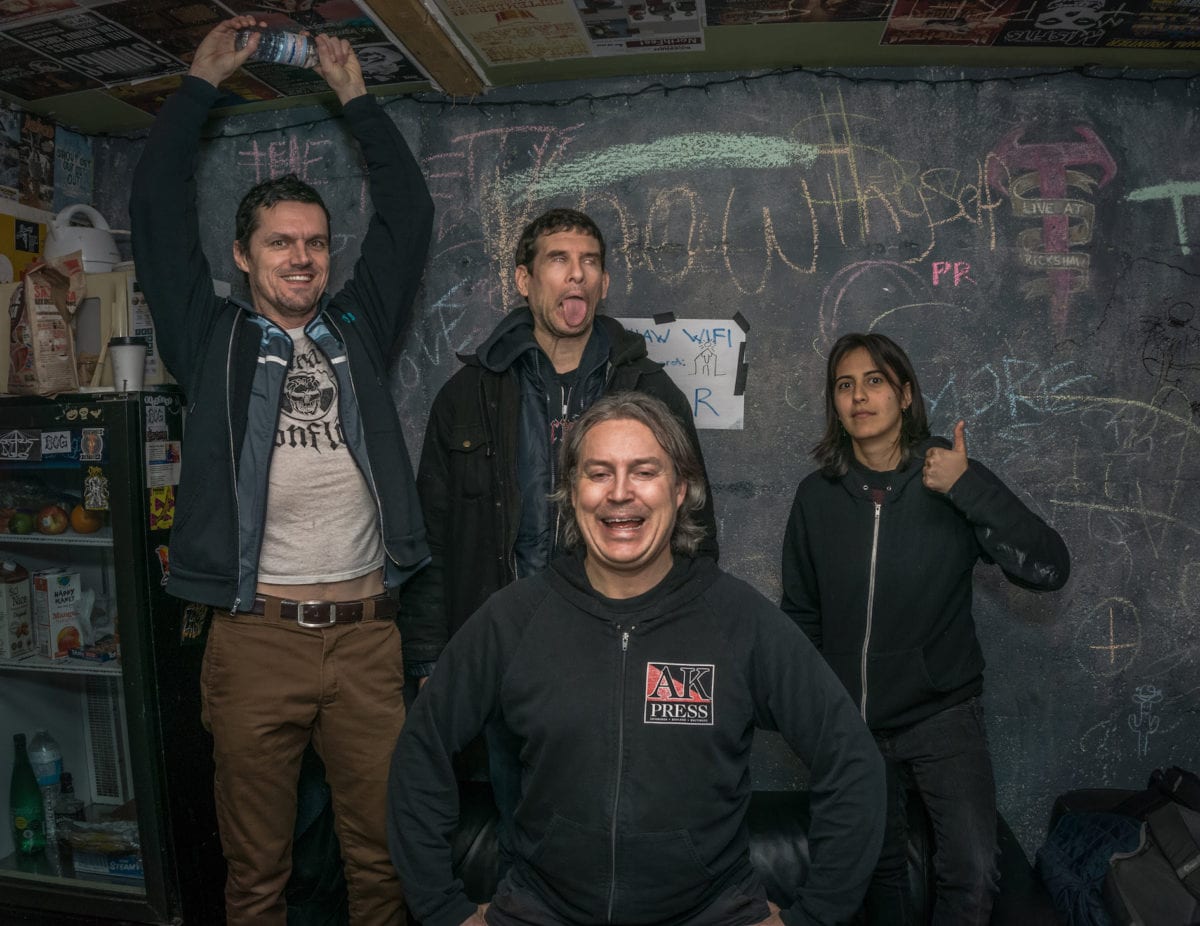 “Is it our seventh? Holy shit!” laughed Propagandhi vocalist Chris Hannah when talking about the band’s upcoming album Victory Lap, released on September 29. “I’m glad it’s almost out. For the past month, it’s been very excruciating waiting for it to come out so… phew.”

This waiting stage of the process is the most difficult in the timeframe of recording it and seeing it through to the release date, with Hannah agreeing that it can build up a wide range of emotions.
“The first bit is okay,” he stressed, “because there’s a number of stages you go through when you finish your record – I know I do personally – and some of them are not very pretty and you’re second-guessing the whole record and wondering whether anybody should hear it. But then there comes a time – and for me it came about a month and a bit ago – where I was like, fuck, this record is fucken ripping and I was excited for it to come out and when you have to wait another damn month for that to happen it’s like, come on, let’s get going here (laughs). I guess you have to follow and trust in the process.”

Having been around since 1986 Propagandhi pretty much know their sound and what they want out of their records and because of that Hannah believes that goals are not something that they necessarily think about when planning an album.

“I don’t think we had any conscious goals except to entertain each other in the practice space,” he said. “It’s the same with every record. I come in there with a riff and my goal is to make a song the same way we did when we were 18 years old, like, Woah, that’s a great riff, let’s do this. That’s all we’re looking for really, whether or not the record even gets made. In that sense, it’s kinda easy. We don’t have to make conscious decisions about directions or anything like that and I think on this record the most conscious decisions we actually made were more gear related. Things like, let’s change the gear up we use for this record and let’s make things sound a bit different and we achieved that, but in the course of it we didn’t know that the songs themselves were gonna sound a little bit different than our last record. To us, it was just a continuation but a lot of people have said this record sounds a little bit more melodic than the last one.”
When mentioning using new gear, Hannah is mainly referring to different setups for his guitar and vocals, admitting that in the past his ignorance and lack of foresight has in part held him back from reaching his full potential.

“I always use V30 speakers in a Mesa Boogie cabinet, that’s what I’ve used for a long time when we record and this time I was like no, no, no, I’m gonna go the Angus Young route and I’m gonna use Greenbacks and a Marshall and it made a big difference. It’s surprising what a difference it made for the feel of the songs. They’re brighter in a pleasant way and they’re bouncier. I dunno… for the vocal mics I usually use an SMT which is a dynamic mic and I decided to use a condenser mic this time; just a lot of small things that piled up to make the record sonically sound a bit different because you don’t want every record to sonically sound the same. We’ve kinda always had records that sound quite a bit different from each other – if not the material at least the recording quality – for good and for bad.”

After 30 years in the music industry, it is refreshing to hear that there are still elements of the trade that Hannah is still discovering, proving that no matter how much you think you know there is always room for experimentation and improvement.

“For sure,” he nodded. “I think part of it is we’ve been so monumentally naive for so many years. I literally had no idea that there were different speakers in guitar cabinets until probably ten years ago. It’s crazy. If you think my ignorance is impressive regarding gear you should see Kowalski (Todd, bass)! He literally doesn’t know what kind of amps he plays (laughs). It’s incredible. You get to be 46 years old and you’re able to add a new element because you weren’t smart enough at 22 to try the cool things.”

Victory Lap also sees Propagandhi welcome new guitarist Sulynn Hago to the band, replacing Dave Guillas who had been with them for the last ten years.

“She was hired essentially as a live guitar player,” Chris explained. “After Dave left we thought it would just be the three of us making songs and we would just have a guitar player that came with us live but it was pretty early on with Sulynn that I knew she fit in more than just as a live player. She is very much one of us but lives so far away that it was logistically not practical for her to be a part of the writing process. She was supposed to come and play on just two songs on the record and she did those songs and then she kept asking for us to pull up another song and she would fool around with that until she ended up playing nearly every song on the record (laughs). She can just do stuff on the spot but I think it’s her energy live that is the big difference for us. She really adds a visceral bit of excitement to the live show. I think we feel like more of a complete live band now compared to before. Dave – who is one of my favourite guitar players of all time – is much more of a cerebral player and is more interested I think in crafting the songs and to some degree, I think he would have been fine without playing shows but Sulynn wants to do it all. She wants to perform and she’s just a ball of energy on stage.”

While the title of the album alludes to the band maybe thinking of calling it a day and going out on top, Hannah seems reluctant to go into further detail.

“Um… I don’t know,” he stammered. “I kinda leave the title and the cover image up to the eye of the beholder. There’s some pretty obvious socio-political meanings you can pull out of the cover but I think the title and the image of that rollercoaster on the front really appealed to us because of what’s happened in our personal lives for the past few years which has felt like a fucken rollercoaster. You never know at this age. All it takes is one blown out vocal chord or one blown out elbow on our drummer and that’s it so… we’ll see.”

Hannah formed Propagandhi in 1986 with current member Jord Samolesky and says that in the beginning the pair just wanted to have a band that combined the best elements of punk and metal.
“I was a metal head and Jord was a punk and we were trying to make… in my mind, we wanted to make a band that sounded like a cross between Kreator, Dead Kennedys, Dayglo Abortions, Sacrifice, and Voivod. We were kinda mixing our favourite punk bands with our favourite metal bands but we were never really able to pull it off. We were fine with the punk part but we weren’t very good as musicians so everything that we liked that was metallic kind of failed but we got better as years went on until now here we are in 2017 and I think what we’ve been doing for the past three or four records has been way closer to what we had in mind when we were kids than what we were doing in the 1990’s.”

Propagandhi were fortunate enough in their early years to capture the attention of Fat Mike who took interest in the band after they supported NOFX on tour.

“We opened for them at a little bar over here in Winnipeg,” Hannah recalled, “and he bought… actually he didn’t buy it. He took a demo tape from me – and he still owes me money for it (laughs) – and then he started phoning us after that from California and we were like, this guy is fucken crazy! He wants us to come down to the States and make a record… is this guy fucken crazy? But we did anyway and here we are (laughs).”

Over the course of their career, Propagandhi have taken their music from more punk influenced leanings to contain larger elements of metal, with Hannah saying while the shift has been noticed and monitored by the band, it was not something which was outlined as a direction they intended to take.

“It wasn’t planned,” he replied. “It’s more just us getting better at our instruments. I think even on our early records you could hear Metallica influences and you could probably tell that the band was just not capable of pulling it off. In 1993 to 1996 we couldn’t pull off what we’re doing now because we just didn’t know how to play it. We got better over the years; we’ve gotten closer and closer to the original vision of the band. Nothing conscious, just an evolution of skill through perseverance.”Propagandhi

Propagandhi have never been a band to mince words, with their political views covering everything from human right to racism to homophobia and everything in between, and Hannah smiles when asked if he thinks his outspokenness has ever impacted negatively on the band’s career.

“Yes!” he laughed. “When we put out our second record… our first record was during that bizarre skate/punk explosion in the early 1990’s and we sold hundreds and thousands of copies of that record and then we put out the second one and we thought okay, people are actually listening so let’s get serious here. We put our politics at the forefront – even on the record cover – it said ‘gay positive, pro-feminist, anti-fascist’ which back then… I mean the world has caught up to us but back then those were things that people did not wanna see on a record cover they were about to buy at the record store so that record was just a flop: a follow-up flop in terms of nobody wanted to… everybody that bought that first record or at least half the people that bought the first record did not wanna touch that second one and I can kinda relate because it was a younger crowd back then. People in their teens back then didn’t necessarily wanna bring home a record to their parents that said gay positive on the front (laughs). Happily, the world has caught up with that since then.”

When pressed if he thinks his music and lyrics and beliefs have actually impacted on people lives Hannah pauses momentarily.

“Um… well anecdotally I suppose to some people,” he measured. I think everybody finds their way eventually anyway but it’s always nice that people think you’re the flashpoint for whatever transformation they go through. I had that experience with bands like MDC and D.R.I and Dead Kennedys. To me, those bands transformed me but in reality, I probably would have found my way and discovered my own values on my own anyhow but it’s much more memorable and much more fun to have a bunch of fucken cool bands to help.” 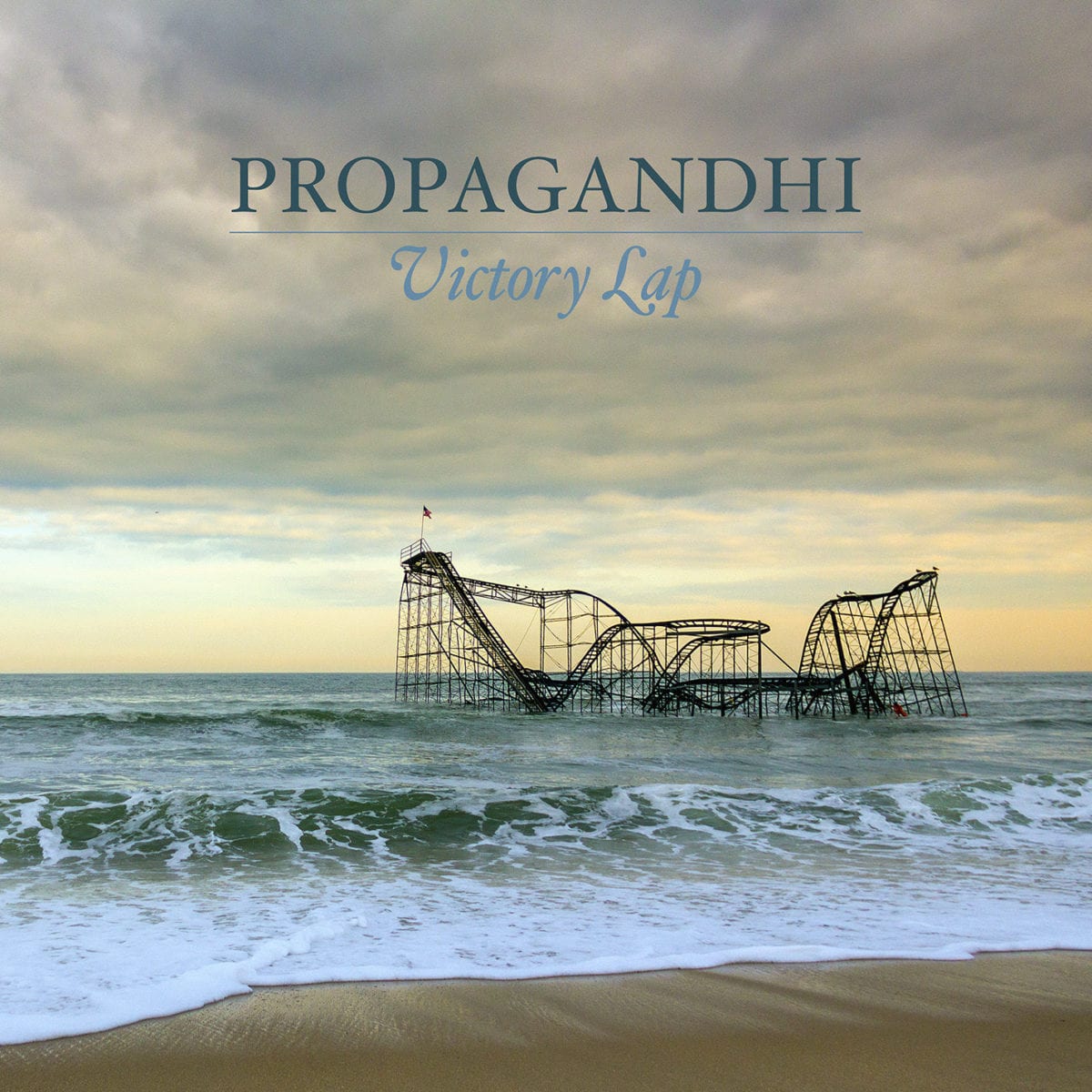