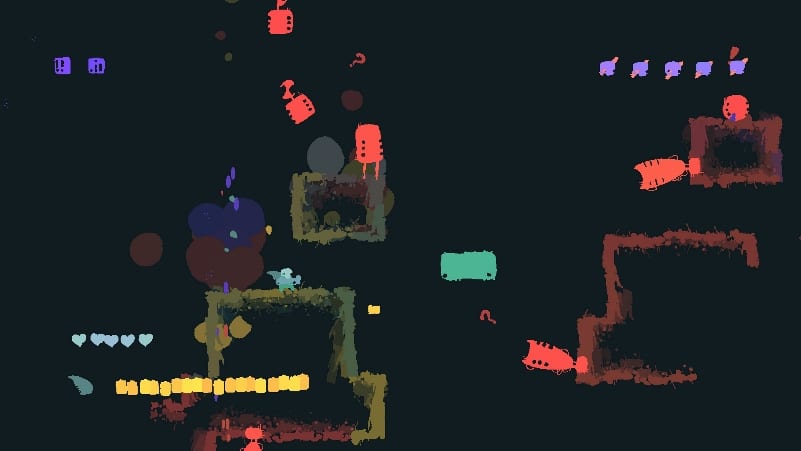 In a games market where top-tier graphics, high-resolution explosions, and lush environments are king, it’s good to take a step back and appreciate what a game actually is. A game is a set of systems working together to deliver an interactive experience to the player. In other words, you could strip away the explosions, the high-level graphics, etcetera from Call of Duty, and it would still be, essentially, the same game. That’s probably a bad example but bear with me.

It’s nice to see when a developer understands the core of their game and polishes it to perfection. These ‘minimalist’ games are often tough-as-nails, based on skill rather than grinding for levels: easy to pick up, but hard to master.

One such game is GoNNER, a 2D platformer with psychedelic visuals and intense, twitchy gameplay. I sat down with Ditto, creator of GoNNER, to talk about his work.

Asked about his initial inspiration for GoNNER, Ditto gave a surprising answer.

“Other action games mostly. And music. And comics. Oh, and some movies. But mostly, GoNNER started as a counter-reaction to another game I was working on at the time. I was working on this lovely little game idea about cute aliens that find friends in outer space.  One late night, I started animating a screaming skull just for fun. I really like skulls. And like, GoNNER isn’t a very angry game, but it is in comparison to that other game I was working on… I guess I needed an outlet or something?

“I was also toying with a system for platformer controls and sort of combined the two. A couple weeks later this little side project had completely taken over my life. And then Martin Kvale came on the project to help out with sound design. Then Joar Renolen joined and added his music to the mix.

“But the initial inspiration was mostly that I was sick of cute aliens, and wanted to draw skulls.”

GoNNER’s sense of ‘character progression’ lies in its random pickups: weapons and new skulls for the protagonist to wear. However, no weapon gives you complete domination of the game. Skill is always required, and though some weapons may deal more damage, each presents its own challenges: How are you going to fit a reload into this tense encounter? How close do I need to be to the enemies? The player’s greatest weapon is their skill with a controller: if you react properly to all the threats on-screen, you can beat the game even with the weakest pistol and skull. Good luck becoming that skilled, though.

GoNNER involves almost no language, except for the necessary pause menu. The story is presented entirely through visuals and sound in a way that reminds me of Hyper Light Drifter: the player doesn’t need to be told where to go or what to do, as the genius simplicity of the gameplay and level design present natural goals. I wanted to know what led to this decision, which added to many layers to GoNNER’s appeal.

“It actually came pretty naturally from the game’s design. We knew early on that the game shouldn’t explain too much to the player. There’s so much going on in GoNNER that isn’t explained to the player, figuring things out is part of the fun. To make the whole game tie into that philosophy a bit more, all the characters talk in icons and symbols to make it clear that these characters have a hard time understanding each other. Your best friend, Sally, and you mostly communicate through her facial expressions. Language is so overrated anyways.”

I previously mentioned that movement is key, and comprehending the controls is what defines successful players. I think this is the mark of a great platformer: the player develops a ‘play-instinct’, where they can assess each situation in a split-second and react accordingly. It’s easy to die stupidly in GoNNER – landing on a hedgehog-thing’s spikes after clearing a room of higher-level enemies was one that made me groan – but these deaths lend to the player’s education: don’t do this, never let your guard down, cling to walls. These lessons occur naturally, and the more the player… well, plays… the less they’ll find themselves dying. I can rattle off roguelikes that owe their greatness to this natural tuition: The Binding of Isaac, Dead Cells, Death Road to Canada, Nuclear Throne, and Captain Flinthook stand out as crown examples. Many modern games have hints and tips during loading screens: ‘don’t approach the gobbledygook from the front’, ‘don’t jump onto the deadly bloody spikes’, ‘don’t throw yourself into a meat grinder’. When a game establishes a wordless communication with the player, they can feel the joy of improving without being patronized.

I asked Ditto how GoNNER achieved this tight, instinctual rhythm, and how he ensured the game was neither too easy nor too hard.

“It was difficult. I think we managed to include enough mechanics in the game that you can make it through by only using half of them. That is very intended. New players generally start by trying what they’ve learned in other games when picking up GoNNER. My hope is that a lot of those preconceived ideas work out, giving you something familiar to fall back on in this very difficult game that doesn’t tell you anything about what you’re supposed to do. During development, we showed the game at a lot of conventions and shows, during which I would listen carefully to people’s frustrations and try to meet as many expectations on the controls as I could. There are still a few areas I’d do differently if I could redo it, but overall, I’m very happy with how the game’s controls turned out!”

The indie market is populated by roguelikes, and there’s a reason for that. Roguelikes provide an excellent pastime for brief spurts of play, allowing the player to keep returning, playing for ten to thirty minutes, and still feel a sense of progression despite dying over and over. The appeal of roguelikes isn’t to know the full story: it’s to master the game, beat all the bosses, collect all the items. The formula lends itself to busy, workaday life.

I asked Ditto what defines a ‘good roguelike’:

“I really don’t know. I would rather call GoNNER an action game with roguelike elements, I think. Roguelikes have really given games some interesting mechanics, but I don’t think you have to adopt every single one if you don’t feel like it! When talking about roguelikes, I think I tend to mostly care about the permadeath mechanic. I love games that you can play for 20 minutes and then be done. Story-driven games that expect you to play them for 10 hours before appreciating what’s cool about them usually lose my attention before that happens. The modern wave of roguelikes, to me, represents an antithesis to that. But yeah, if you want to play a good roguelike, try Brogue!”

Finally, I offered Ditto the chance to advertise GoNNER to HEAVY readers. Ditto, in his usual fashion, remained humble:

“I’m not here to tell you what to do! But if you like action platformers and would like to play one with tight controls, insane difficulty, and amazing sound design, you should definitely try GoNNER!“