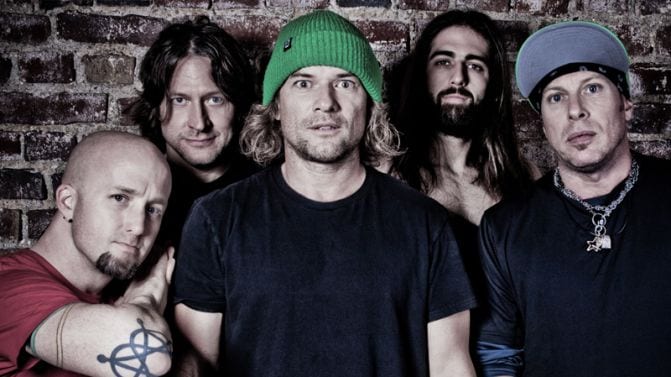 It’s funny how one album can have so much of an impact on somebody’s life. While I’d always grown up listening to music – it was normally my Dad’s music that I listened to. Yes, that went to the extremes of KISS, Black Sabbath and range of other 1970s and 1980s hard rock. But Ugly Kid Joe was probably the first band that I discovered truly on my own.

I still remember it I was walking through the main shopping mall of Devonport, Tasmania and as we walked past the local radio station’s studios that faced out onto the mall they were playing a new track – Ugly Kid Joe’s ‘Cats In The Cradle’. I fell in love with it straight away and just had to have it – so I saved up for it and a couple of weeks later America’s Least Wanted became the first album I bought on CD and not on cassette.

Now with Ugly Kid Joe coming to Australia to do the entire America’s Least Wanted album live on stage, I caught up with lead singer, Whitfield Crane, who wasn’t on the other side of the world like I thought… but was instead chilling in Fitzroy – an inner suburb of Melbourne.

“I guess you would call me a lucky man,” laughs Crane when I ask how he feels about being the man behind one of Rocks most iconic albums. “We were all about 23 or 24 when we made that album with producer Mark Dodson in a studio in North Hollywood. You know it was quite a ride for us, it was this extreme experience and it took us right around the world which was a good thing.”

As our chat goes on he admits that part of the reason that he wanted to re-do America’s Least Wanted as part of an Australian tour is how much he loves Australia… it’s here he tells me that he is in Fitzroy right as we speak. “You know what, man I love it here,” he says. “I knew that I wanted to be in Australia and I knew that this was a good year to celebrate that record… it is twenty-five years old this year… it is amazing that it has been that long, anyway. The way I looked it at was ‘well why don’t we start this thing up in Australia?’ We are going to do it in Europe in April so I thought ‘why don’t we do it in Australia while we can because I love this country?’ I’ve lived in Australia earlier this year, and I’m back now because I love it here in Australia. So I figured why not do the tour in my f**king home.”

I asked Crane what he loves about Australia and he quickly answers. “I love the people,” he says. “I’ve spent most of my time in Melbourne and here I love the people and I love the vibrant music scene. You can see any style that you want, you can see jazz, you can see death metal, rock, acoustic… whatever you like. It’s such a great place and I mean I started coming to Australia in the early 90s but I never had the time to stay. But I do feel that California and Australia have a lot in common, and everybody that I have ever met from Australia is fun and full of life. I love those qualities in people so I want to be around that… so here I am. I’ve actually just started a band here and recorded an album at Hothouse Studios in St Kilda… so yeah I’ve created a brand new band called Yellow Cake.”

When our talk turns back to America’s Least Wanted I ask Crane what it’s like going back and revisiting songs from 25 years ago. “It’s super familiar,” he says after thinking for a moment. “You know you look around at everybody on stage and think this is familiar. Like we just toured for two months in Europe and had this really great time. We went all over the place and yeah it takes a little bit of time to get your groove on, but when it comes to playing the tracks off America’s Least Wanted yeah it feels so familiar. That was our big record and it meant that we got to tour with people like Ozzy Osbourne and Motorhead, it reminds us of that and that is cool. The songs still hold up, as we’re playing them I look around and see that everybody is still having a good time and they are all digging it.”

That leads toaskingk whether or not when Ugly Kid Joe were recording America’s Least Wanted whether the band knew at the time that they were making something special. “No… not at all,” says Crane. “To be honest we were just trying to finish it. We were on Mercury Records and we’d just come off a kind of successful EP and they just wanted us in the studio and making a full length record. So we were really just trying to finish the thing because they wanted it out while we still on a roll, and we were like kids we didn’t know what we were involved in so we were just trying to get it done. Like we put ‘Cats In The Cradle’ on the record just to fill the record. It got to the point where we didn’t have enough songs to finish America’s Least Wanted for it to be a full length record and we were sitting around and we said ‘what about Cats In The Cradle? Yeah let’s do that.’ That was just to fill the record it was never supposed to be a single and then this radio station in Texas started playing it and all of a sudden it was #1… it became a big song. And sometimes I think the best things in life are like that, we weren’t trying to do something crazy we were just kids making a record and having to work. So no… we didn’t know anything.”

With that little shock wave settling in I ask Crane what made him chose ‘Cats In The Cradle’ as a song to cover and whether or not they have got tired playing the ‘hits’ over the years. “That was a song that I used to listen to on vinyl with my sister,” he explains. “It is one of the first songs I can ever remember hearing when I was a little boy. I would sneak into my sister’s room and she would have a little record player, and we would have to be quiet so that our parents didn’t hear us, but we would play it over and over… we loved it. I just loved the song, the band went along with it and we just chucked it on the album. I’ll be perfectly honest though, it was good to let go of it for 15 years. By the time 1995 came around I just wanted to be heavy and do stuff from Menace To Sobriety because that’s what I wanted to do. But now I’m like, wait that thing is cool and now we as a band get to go back and do these songs that people love. That’s all I want to do, make music, tour around the world and make people happy.”

Ugly Kid Joe are on tour in Australia during December. 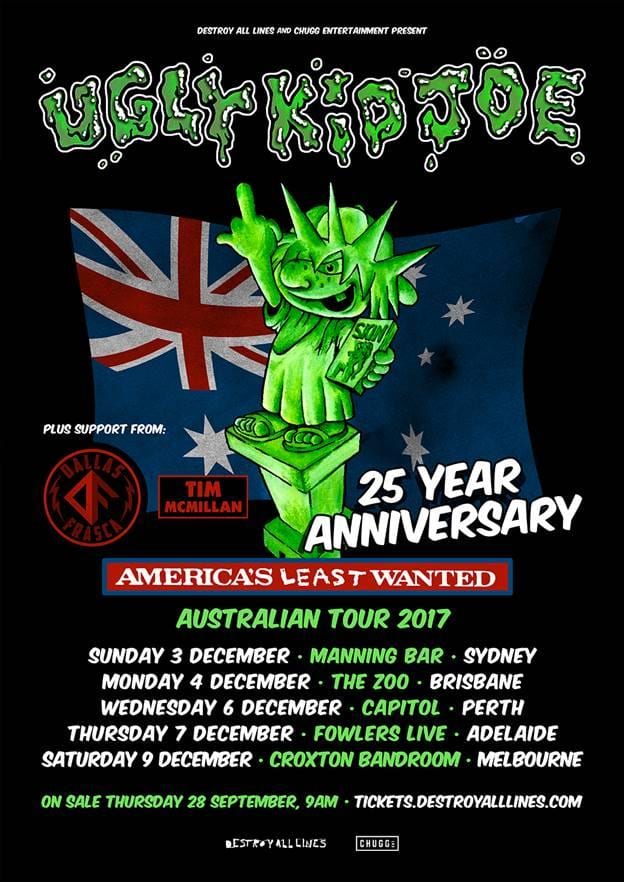