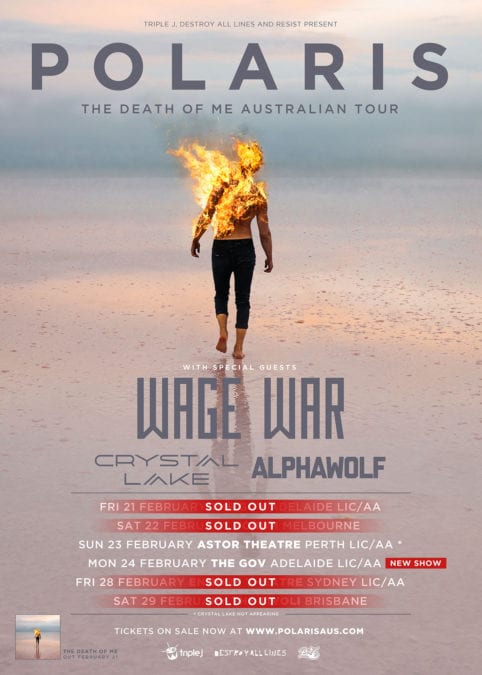 This headline is not uncommon for numerous tours which make their way “down under” – the shock for the 62,000 fans of the band on their social media page, namely the Australian-based devotees, was that the capital of South Australia sold out first. Not in Sydney, where the melodic metalcore outfit resides, but in “RAdelaide”. The most amusing part of this revelation was the “comments” section to the post where the haters utilised their keyboard warrior (in)abilities to abuse the city rather unjustly. In retrospect, these misinformed key boxers have missed the point – a band, who have built a following worldwide with their art, is adored unconditionally in the most astonishing places; that is the most important characteristic. Also, let’s not forget, the melodic metalcore genre would be barely known in Australia without the likes of the innovators such as I Killed The Prom Queen and Day Of Contempt who were from, you guessed it, Adelaide.

Melbourne’s nu-moshcore quintet Alpha Wolf were first to incite the ninja moshers and boost the growing audience from consorts to contenders and the five-piece did this very successfully. While the genre(?) of moshcore is for the most part quite uncomplicated and pioneered years ago by the likes of Bury Your Dead, thankfully and impressively Alpha Wolf bring more originality to the formula with flirtations of Nu-Metal that would impress Wes Borland (to an extent, the fashion also). There is certainly an influence of Northlane stylistically as well (the face mask namely), but not enough for comparison or replication, that would be reserved for the current leaders in Knocked Loose who are a clear influence. AW admirably embrace elements of hip-hop and have a stage presence that is imposing and infectious and although the band stated they “did not deserve to be on this bill with such talented acts”, this scribe and Adelaide would strongly disagree. “No Name” was savage and striking, the clear highlight of the set and closer “Sub-Zero” certainly inspired the crowd as a favourite, but there was no doubting the announcement of Alpha Wolf completing their new album just this week and featuring a new song on the night was the crowning moment. The howls from this Tasmanian turn Victorian breakdown enthusiasts are about to become very loud and distinct.

The Gov had reached its capacity however, all who were within were not equipped for the earthquake Japan’s Crystal Lake were about to deliver and devastate with their annihilation of a performance. It was certainly unexpected from this writer and many others in attendance, but from their thunderous explosive beginning, the quintet destroyed the stage, venue and truthfully their counterparts on this evening. Their energy, insanity and borderline violent presence was not dissimilar to the likes of The Dillinger Escape Plan and in all sincerity, they were untouchable on this night and deserved to be higher on the bill. Vocalist Ryo Kinoshita was more a crazed predatory animal with bloodlust than a human, administering a psychotic persona that altered many’s perception for the better; this is not to take away from the remaining members of the five-piece, who were as deranged, especially drummer Gaku Taura who spent more time standing and abusing his kit than simply performing. The elements of black and death metal incorporated is where CL really dominated and the electronic flutterings modernised their recipe in tracks like “Hail To The Fire”; sadly the melodic influence akin to While She Sleeps in songs like “Lost In Forever” and “Apollo” downgraded the onslaught of persecution initially felt when the quintet began, only to a very minuscule aspect though. Following these heavy metal samurais was going to be a near impossibility.

To recover from the devastation left by Crystal Lake, this was left in the hands of Florida’s melodic metalcore enthusiasts Wage War and while the band did supply an atmosphere of safety and recovery, it was a bit too safe in all honesty. The whole performance had only glimmers of inspiration and engagement, with the majority feeling like the band had either felt victorious because they had acquired many fans down under, or defeated by what Crystal Lake had orchestrated prior. The similarity to the technique of The Amity Affliction is beyond apparent and it works, but it isn’t inventive. “Don’t Let Me Fade Away”, “Alive” and “The River” suggested promise and that Wage War could elevate when needed, but to counteract any of this potential the five-piece played the love letter ballad “Gravity” which was an overly sugary syrup in an already poor mix of Canadian Club and Cola. It may have been the travel or simply an off day, to be frank though, Wage War could have opened this event quite comfortably.

In the Polaris’ song “Unfamiliar” released in 2015, vocalist Jamie Hails screams the lyric: “I’d Never Thought I’d Be Here” and undoubtedly this proverb brilliantly captures what occurred at this event where the Sydney melodic metalcore favourites unveiled their new album The Death Of Me to the world in the magnificent city of Adelaide. How the band has grown since those days when they released the remarkable The Guilt & The Grief EP: signing to Resist Records (and SharpTone Records overseas), releasing a critically acclaimed and globally celebrated debut album The Mortal Coil, festival appearances, worldwide tours, stadium shows, sold-out headline performances and the list goes on. There lies the makings of a fairytale, but will there be the sophomore LP slump?

The quick answer is a very obvious “no”; this writer is reminded of seeing another band of similar settings who sold out this exact venue 13 years prior with their second record entitled Horizons – to a degree, the Parkway Drive saga is a blueprint of sorts for Polaris – that being said, the prospect of a future as bright as the aforementioned metalcore juggernaut is apparent.

This was not going to be the gritty intimate show of old that Polaris were brought up in, far from it. Instantly the stage production and atmosphere was entirely different, “Pray For Rain” was an ambient and tender smoky post-metalcore poem, instead of the uppercut their fans are accustomed to. By no means was this disappointing, quite the opposite, more-so it was surprising and somewhat hypnotic. It was to be understood that the five-piece are trying to embark on a journey like their heroes and friends in Architects who have transformed the genre they grew up in and if this was a sign to come, they are on the right path. “Landmine” clarified this, although it did feel like the New South Welshmen were aiming a bit too high for the stars in their interpretation, they needed to comeback down to Earth, gratefully they did.

“Crooked Path” brought the deafening sing-along as it always does, “Hypermania” dirtied the too clean aura expertly and “Above My Head” encouraged the notion that the outfit are one of the best at this sound. “Dusk To Day” acted as an intermission of sorts with Mr. Hails ordering the audience to brighten the room with their phones; then “Vagabond” became rather confusing with the inclusion of a tambourine – different and bold? Sure. Suitable? Probably not.

“Consume” was a necessary eruption that featured a pause for an injured supporter as well as a guest appearance from Wage War’s Briton Bond. To close “The Descent” that acted superbly as a the hammer on a nail to the coffin of their album launch.

Predictably an encore was performed, but not without one of the most inspired and authentic speeches of thanks from Jamie and his band brothers; the final nails were hammered in with “Masochist” and “Lucid”; not to fear though, this coffin isn’t buried, it is merely the transport for Polaris to embark on their next adventure around the world with LP number two; perhaps these aforementioned stars will be their home soon.

There are limited tickets left for their upcoming shows so get them NOW!

LISTEN to “The Death Of Me” – https://orcd.co/thedeathofme 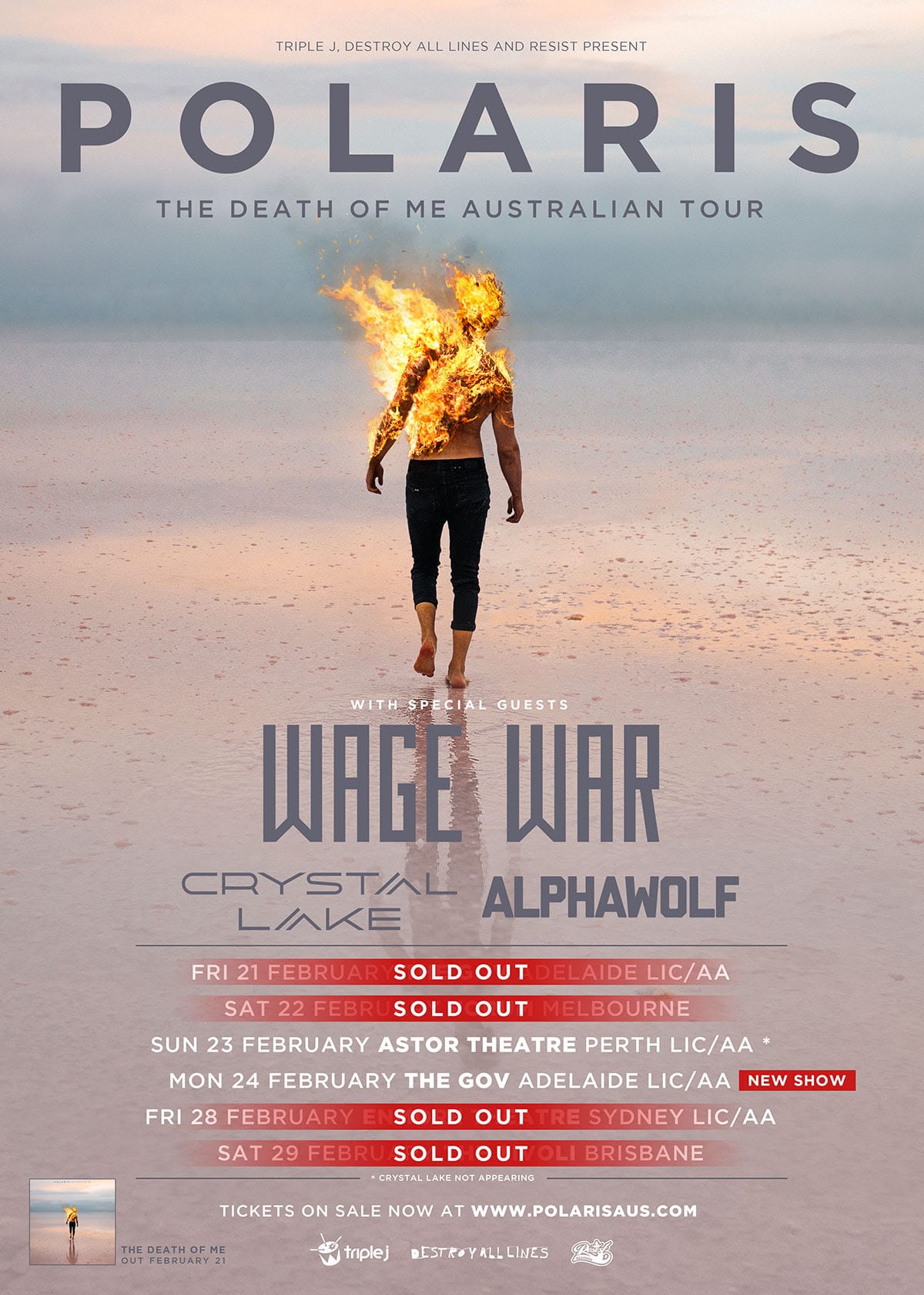 More information about the tour and The Death Of Me here:

POLARIS “The Death Of Me” Out Today & National Tour Starts Today!