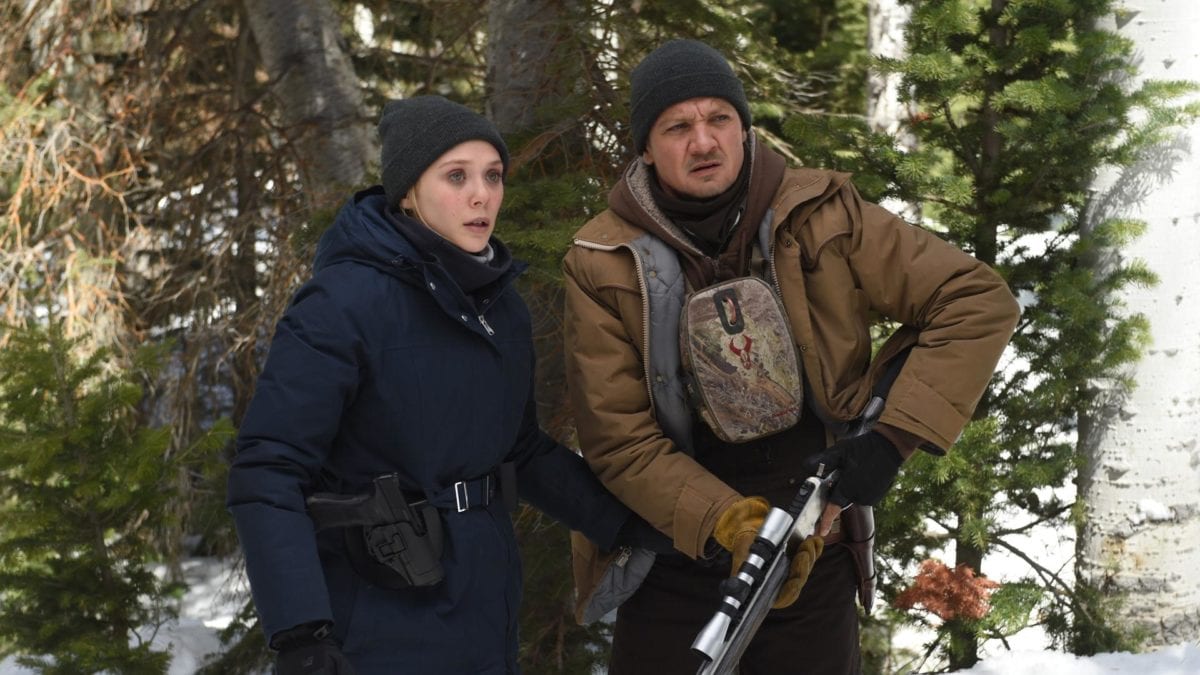 While it may not have the big publicity budget of a film like Batman vs. Superman or even any of the unfunny comedies that are likely to come out of the United States this year, that shouldn’t stop you going out and watching the brand new crime thriller, Wind River. From the creative mind of writer/director Taylor Sheridan, who has wowed us in the past with films like Sicario and last year’s brilliant Hell Or High Water, Wind River takes its audience on a journey as a young, naive FBI agent works with a seasoned parks and recreation hunter to solve the murder of a young woman whose body is found on an icy Indian reservation.

Filling the starring roles are twice Oscar-nominated Jeremy Renner, who most people would know as Hawkeye from The Avengers franchise, and Elizabeth Olsen who also appears in Marvel’s hit series as Scarlet Witch. When the two of them come together to talk about Wind River, the admiration between them is clearly on show.

When asked about his character, Renner says, “I play a character called Corey that is a wildlife hunter on a reservation in Wyoming.” Olsen cuts in by saying, “And I play a character called Jane Banner who is a Federal Agent, and she suddenly finds herself in a world that is totally strange to her and that she is completely ignorant to and doesn’t understand, in the same way, that I was. But she is good at her job, and she tries to follow the protocol. She tries to stay calm and follow what she needs to do, but she knows that is not quite the environment that she was trained for or even knew about.”

For both actors though, it is obviously clear that they love working with each other, whether it be Wind River or, of course, The Avengers. “Working with Jeremy is… let’s just say I enjoy working with Jeremy,” says Olsen smiling. “It’s very lucky because I haven’t even been working for ten years, so to get to work with somebody that is talented and rich in character as Jeremy is a massive learning experience that I get to have. To be able to be in a scene with somebody that is struggling with an emotion that they are trying to restrain is just a beautiful, elegant dance to try and get to, and it is special to be part of. I felt very lucky that I go to work with him in this kind of atmosphere because on The Avengers we just have fun, but this is a much more personal journey.”

Olsen is also full of praise for director Taylor Sheridan, who she says knows how to keep control of a set. “There is no question of who is running the ship when he is on set,” she says. “Taylor always has everything under control. You just know what is happening. His biggest concern with me was that I looked like I knew what I was doing, so for a few months before we started filming, he was just on me. He would come out and see my training, and he wanted to see videos of my progress, and he was just very adamant about me changing my form and that I would know how to clear a house properly. From that conversation at the beginning, it just felt like we had started filming the movie three months before we actually started filming. By the time I got onto set, I already knew how to work with him, and I already understood how he worked and he is also very collaborative which is important to know.”

Renner agrees wholeheartedly about what it was like to work with Sheridan. “I think we are very, very similar as humans,” he says seriously. “We’re both sort of direct and unapologetic; very, very clear about what we both want and we don’t want to get in each other’s way. Instead, we just want to help each other. So we both just listened to each other, we both just listened and we both spoke. And for us to be able to communicate and have such trust with the emphasis on being able to bring out some truths in the movie. I would always challenge myself, and sometimes he would just watch and sometimes I would challenge him, and then he would challenge me. I remember one thing he said to me… I’m never going to tell you ‘no,’ and I thought, ‘good… I like that.’ That gave me a lot of freedom.”

He also agrees that Sheridan has created an amazing script for Wind River. “The script has a lot of depth to it,” he says. “What kind of makes the movie pulse along is the thriller aspect, there’s the whole whodunnit kind of thing, but the depth and journey that comes from Corey having to deal with loss and how to deal with it and not deal with it. Within that story, it all kinds of ties together but the world that you talk about is a fresh, majestic, unapologetic world. You know to just be emotionally affected by the movie, and to have a thought or an emotion that you wouldn’t have had prior to sitting down and watching Wind River. To me, that is the greatest gift that I can ever get out of a piece of cinema – either watching it or being in it. I think that is just a beautiful thing, and it kind of sticks with you, you know? Because then it isn’t just entertainment, there is value – there is an emotional and spiritual value to it.”

Wind River is in cinemas now.