Getting it on with Sarah McLeod 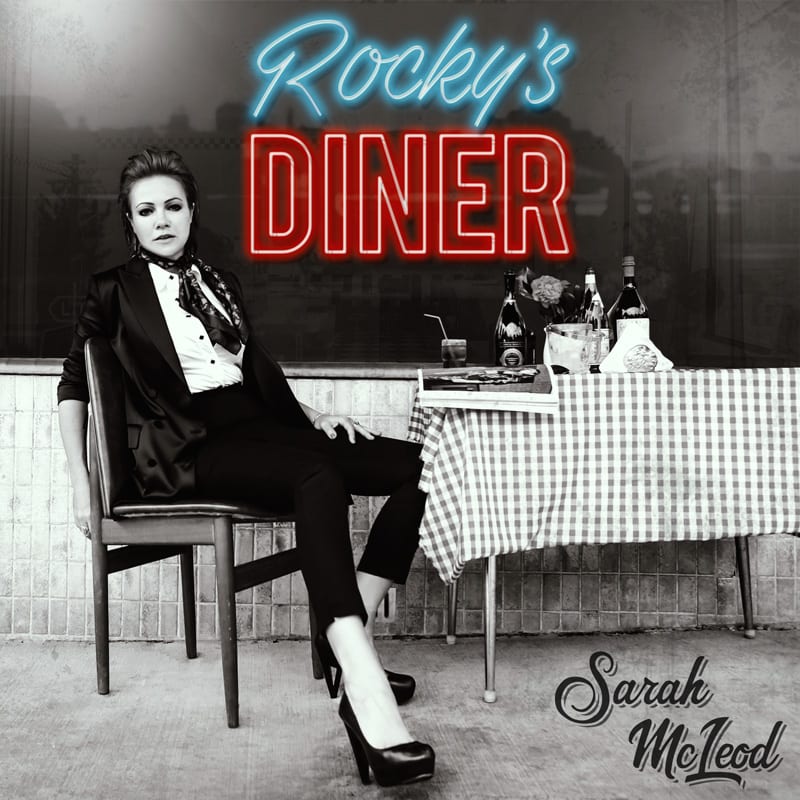 The last few years has seen Sarah McLeod on a real musical journey. On a break from The Superjesus her fans watched as she entered the dance music world with songs of her own and then with Screaming Bikini. Then her 96% Love Song Book saw her really explore her love for the music of the 1950s and 1960s. Now McLeod returns with a new solo album – called Rocky’s Diner, a solo tour and of course The Superjesus are doing some shows closer to summer as well.

When I chat to McLeod she is sitting in her car in a car-wash carpark and when I congratulate her on Rocky’s Diner she asks “Is that a congratulations because you like it or a congratulations because you finished the f**king thing?” When the laughter stops she tells me what she was looking to do with this album. “When I first started with this album I wanted to make a rock album, but my deep inherent love for 1950s and 1960s music that I was desperately trying to keep to the side just found its way in anyway. And then when I started to write the album I found it starting to drift back towards the 1950s and 1960s Motown kind of sound of things. So I thought I would produce it like it was really heavy, so I thought I would do that kind of style but I would make it really dirty – I’d have that really loud, dirty guitar. Because my last EP I wrote a whole bunch of songs in that 60s style but I produced it to the style where as this time I produced it in a different form – in a different way. So it kind of has a 60s twist but is produced like a rock record.”

With the 1960s sound coming through so clear on some of McLeod’s more recent work I asked where the love for that kind of music stems from and she laughingly says “Well 60s music is the best music so I just have really good taste. No, seriously it was what I grew up on when I listened to my parents records. Then it really drove home for me with soundtracks that I love from the 80s – soundtracks like Back To The Future and Dirty Dancing. I used to be a huge fan of Michael J. Fox when he was in Family Ties and I was just obsessed with him. So when he came out in Back To The Future and there was all this cool 50s music there… suddenly he was there playing Johnny Be Good, which I used to love because my parents had the record. It was like all my worlds collided and I never really got past it. All the other music I got into over the years I loved but I never appreciated it the way I do the old stuff.”

In order to put together Rocky’s Diner McLeod decided to leave Australia and head to New York. “I just wanted to get away from everybody so I wouldn’t be bugged,” she explains. “I wanted to do the record from beginning to end in one big creative whirlwind, without stopping and without a chance to second guess anything. And I didn’t want anybody’s opinion whatsoever. So, I thought the best way to do that was just get out of town, turn the phone off, start it and then tell everybody that you are going to have it done within three months and then you have to because if you tell somebody that you are going to do it you have to do it. So I told my neighbour ‘i am going and I will be back at the end of March’ and I started on the 1st January and then I just worked like a machine, like non-stop constantly and then I delivered the album on the 31st March. I’ve been wanting to go to New York because I wanted it to be freezing, I wanted it to be snowing and New York has the air of possibility about it, L.A is kind of the same, it just has this magic in the air and you feel like anything is possible. I didn’t want to be tempted to go out and see bands or go to the pub or go and talk to anyone, so New York is a bit of a weird city to chose when you don’t want any action to go to seeing it is the most exciting city in the world and is always open so has shit going on left, right and centre but that was another temptation that I deliberately walked into because I wanted to overcome the adversity of it. It was a challenge that I wanted to overcome so I didn’t take any clothes so I couldn’t go anywhere because I only had one outfit. I just wanted to be in my studio and be inspired. I prefer to write in the cold because if it is hot I want to go out, go swimming and have fun with the other kids.”

As an album Rocky’s Diner is also inspired by the Rocky movie franchise because McLeod was watching the films while putting together the album. “I watched all the Rocky films back to back because I was given the box set just before I left. I watched them all back to back with my Mum before I left, so it’s like the whole Rocky thing challenge. I had this challenge that I had set for myself that I could undertake was like Rocky climbing up those stairs getting fit, everything that he went through and then would triumph in the end. So I kept thinking that I was Rocky and this was my great fight – to make this record. Also in Rocky IV when he goes to Russia at Christmas and it is snowing, well I was in New York just after Christmas and it was snowing. I was like ‘I’m feeling it, baby.’”

When you listen to Rocky’s Diner there is a real personal feel with the song-writing and that is something that McLeod says she is not surprised by “I think that’s because it is celebrating mediocrity,” she says. “It celebrates the everyday mediocrity in our lives. I didn’t want to write about the fantastic and exciting I wanted to write about the dull and boring and find the beauty in that. I wanted to write about how you don’t really need to be appearing that something fantastic is happening you just need your imagination, so Wild Heart is about a girl who to the untrained eye would appear to have very little – she hasn’t been anywhere, she’s got nothing, she’s never been in love, she’s had this really sheltered life but she has this wicked imagination and if you have that you have that spark inside so what is the definition of success. Success means a lot of different things to many different people but to me success is that spark inside and no matter what you’ve got unless you’ve got that spark inside nobody can touch you, nothing can hurt you because you are like a badass on the inside. So I was thinking about that concept and it was peppered through the record. I don’t want to sound like a dick but personally I love this album. I stand by every chord and every line, every single thing on this album I love from beginning to end and I’ve never been prouder of a body or work ever.”

McLeod says she also has something special for those heading along to her shows. “It is loud and blistering,” she says. “We’re doing it as a two piece, it is myself and Mick Skelton from The Baby Animals and I am playing bass and guitar at the same time. I designed this guitar that has a bass pick-up in it as well and so I’ve had to re-write some of the songs so it can be pulled off as a two-piece. I had to re-write them so I can do the rhythm and the bass and I’ve managed to get it all in there without it feeling like anything is missing. It’s been a lot of work and I’m a little bit nervous because I’ve never performed this live before. We start next Friday night and I think once we get that show out of the way I’ll be fine… but yeah it is very ambitious show that we are putting together, but it’s going to be cool! I’m nervous because I have so much more to think about than just singing. I’ve got all these pedals and switches to think about. The bass comes in and out and it’s arranged to highlight each instrument so it’s like this tapestry and the order that I hit the pedals is super important, sometimes there is like five pedals that I have to hit in one bar and I have to do it with each beat and if I don’t hit it with the beat of the song it will completely f**k me up. There is a lot to think about.”

Rocky’s Diner is released on the 18th August and Sarah McLeod’s tour kicks off this weekend!