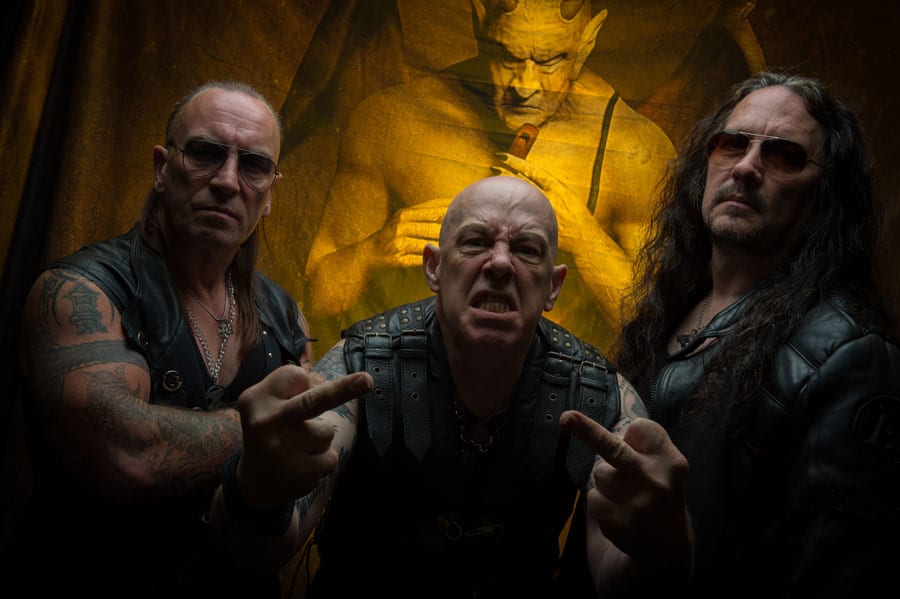 “When we got back together we didn’t really talk about doing albums,” explained Venom Inc‘s drummer Anthony ‘Abaddon’ Bray. “It was more about live work. People were wanting us to go out and play old Venom songs live and it was only when we got back to touring that we started talking about ideas and considered doing an album so it all came about from getting together and playing really.”

The resulting album is Ave, released late last week. With such a wealth of previous albums and a fan base that is as parochial as it is judgemental Abaddon said the band knew they couldn’t afford to merely churn out a run of the mill album.

“We wanted to make an album that would stand up to the back catalogue that we have because we have a pretty good record with Welcome to Hell, Black Metal, and Prime Evil and we wanted something that was gonna sound venomous. We knew it was going to sound a bit more modern; a bit more up to date but that’s only because we worked out our instruments and we understand music equipment a bit better now, and I think we’ve done that. We’ve got an album that sounds like a Venom album so what was the main thing – keeping it sounding real.”

With their debut album Welcome to Hell coming out in 1981, Venom have been a mainstay on the metal scene for close to forty years and as such have established a track record of the kind of music people expect – or demand – from them.

“Above all they expect it to be real,” Abaddon maintained. “They want a lot of power, a lot of passion, some blasphemy, and some dark lyrics, so I think they want heart and soul not just thrash recycled type thing. They don’t want us to bring out just another collection of songs. Venom always had albums and singles especially where… any of our singles could have been on albums, they weren’t just throw away songs or throw away B sides. We always wrote songs with the intent for them to be on a record. When we go out live we’re playing the obvious songs, ‘Black Metal’, ‘Welcome to Hell’ and ‘Leave me in Hell’. We’re playing all those songs with three or four new ones off the album but a lot of the fans want us to change up the old songs so we’re always throwing out those as well.”

When Venom formed in 1979 the heavy music scene was vastly different from that of today. Bands like Metallica and Slayer had not yet cast their ominous shadows over the globe and the brash and confronting style of music this angry, emerging outfit was putting out was not only a rebellion against the system but also a rude awakening to the masses.

“We wanted to be an over the top band like all of the top rock and roll bands,” Abaddon recalled. “We wanted to shock people with pyrotechnics and lighting rigs. We wanted big backdrops, big backline, outrageous lyrics, outrageous album covers, band notes that you couldn’t read, photographs that were distorted and that’s exactly how we took the band and how we ran with it. It’s changed a little bit over the years but we’re still basically a heavy style rock band. We’ve got the same ethos that we’ve always had. Basically, we go out there to party and when we get the first couple of songs to the audience and they fire back… that’s everything to us.

Venom’s first two albums Welcome to Hell and Black Metal, although now considered classic records, didn’t have a large initial impact. Over the years they have resonated with more purpose and to this day still sell large numbers but Abaddon says at the time he thinks the world wasn’t quite ready for the monster that was forming.

“I think both of those albums were a little bit ahead of their time,” he mused. “They were very rough albums and roughly recorded and roughly produced but we only had a short space of time to record then. We only had three days to record and mix. We’d never been in the studio before so we kind of recorded it like punks on speed (laughs) and that’s what we did. Both of those albums have stood the test of time. We’ve sold millions of copies and everybody who is into metal has heard at least one of those albums and are aware of this band. That’s huge to think we’d still be doing this after nearly 40 years. It’s a joke really.”

Some of the biggest bands in the world today owe their careers in no small way to Venom, with not only their influence but also through riding their coat tails in the early days of existence.

“We were touring…” Abaddon recalled, “the first gig we played – the first proper gig was in Belgium and it was a festival in front of 1000 people and the next gig we played was in New York and we played two nights with a little band called Metallica supporting us. From the very beginning we were about let’s do this, let’s go fucken crazy and over the top and fire away and see what happens. Just let it run and that’s what we’ve always done. We still feel like that now.”

After the success of their debut album Welcome to Hell, Venom followed up with Black Metal in 1982 which is a landmark album in not only the context of Venom’s career but also the industry of heavy metal music as we know it today.

“The whole thing with Black Metal…” Abaddon said proudly, “is it came from a conversation we had with a Kerrang! journalist and he asked us if we were heavy metal because it didn’t sound like it to him. He said it sounded new and fresh and we replied no, we’re not heavy metal. There was a copy of Kerrang! on the table and it had Bon Jovi on the cover and we said if this is the heavy metal bible and that guy is on the front cover then no, we don’t associate with that. We’re definitely not heavy metal. He said, okay, what are you guys then and we said we’re black metal, we’re death metal, we’re speed metal, thrash metal, no wait, wait, wait and we wrote all of these names down and that’s where all the genres came from, that one conversation. Before that, there was just heavy metal bands. Bands like Saxon and Iron Maiden were just heavy metal bands but from that period… look at a band like Pantera or a band like Mayhem up in Norway. The two bands now are very, very different bands but when you look at where their lineage goes back it comes back to Venom and when Venom said we were all of those things. Even Chuck Schuldiner from the band Death did that when he was asked about death metal and if he invented it and he said no, Venom did. Black metal music doesn’t sound anything at all like the Black Metal album but it’s about music and giving or art form or letting other people run with it and people take that idea where they want it to go. Black Metal went down that very obvious route. We did a lot of photographs in graveyards and in the woods and that kind of thing and black metal bands took that in as gospel and we personally did the very first logo which is very difficult to read and that was deliberate and since then all the black metal and death metal logos have become more and more impossible to read (laughs). We had photographs where I would hide my face and the record company boss would be really fucken angry and say I can’t even fucken see you but then all the death metal bands started taking their photos with their hair across their face and you couldn’t see who they were (laughs). There’s a lot of things about Venom other than just an album called Black Metal. There are a lot of things that people took from us and ran with it in different ways. Thrash metal bands started coming out of San Francisco and speed/death metal bands starting coming out of Germany. They were very different but they would still say Venom was their influence. For me, that’s a good thing (laughs).”

After forty years in the industry Venom still has an expanding fan base and while Abaddon says the band is still grateful for the support, he also admits the band has earnt their stripes through continually being themselves and doing things on their own terms.

“I think it’s because we’re real,” he shrugged. ” We don’t throw any stuff out that doesn’t come from the heart; from live performances to interviews to photo sessions everything comes from the heart and everything is steeped in history and people who have followed the band for a long time have tattoos all over their bodies… when people like that like the band – and there are so many of them – other people cotton on. Plus with this band, because we’ve been so torrential when you have a new wave of metal music come through – nu metal or whatever it is called – there’s always someone in there talking about Venom. People are always mentioning us from the past or were listening to us growing up and nearly all of those bands would cite Venom and it becomes so wide ranging. Other bands talk about us and that keeps us in the limelight.”