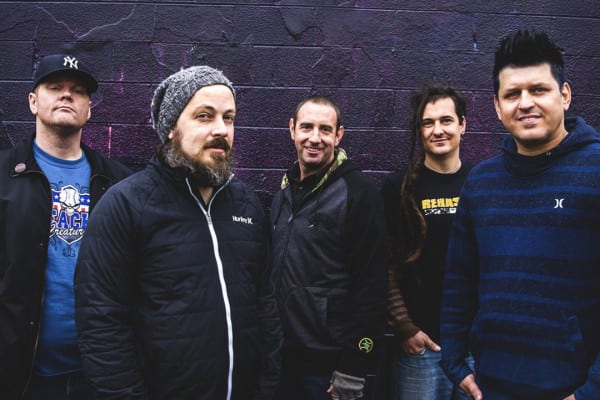 In an era when bands come and go within a few years, the fact that ska punk band, Less Than Jake, has made it to the twenty-five-year mark is a feat in itself. But it is the fact that they are celebrating that milestone by coming to Australia for a tour is something that fans should be very excited about. We caught up with Vinnie Forello to not only talk about the tour but also about the band in general.

Vinnie laughs when I congratulate him on the band making it to twenty-five years of service but he says he’s unsure what the secret to their longevity has been. “I really don’t know,” he says, still laughing. “Generally speaking, I think it is because there is a weird chemical reaction that happened between the five of us. We’ve always been a band that follows our head and our gut instincts, and when we hit the stage, there is this chemical thing that happens amongst ourselves and amongst the crowd and keeps that push-in happening and it makes everything worth it, man. I think that makes the being away from home and family and the weird things that happen in bands: all those bummer things that happen when you’re in a band. All of those things are worth it when you are in front of people and they are screaming songs that you wrote twenty-five years ago back into your face. That’s worth it, man; how can you not want to continue doing that? How can you just walk away from that? That makes no sense to me. There are people in the audience that have grown up with Less Than Jake, they were in high school back then and now they are dads and mums who bring kids to shows. I think that is all the reason to do it – that is all the reason to be in a band still. Who knows what kinds of magic and weird voodoo shit makes it happen, I don’t know, but I know the feeling and that feeling you get when you get on stage and get off stage is awesome. I think that is the glue that binds the five of us together and makes us want to keep going.”

The talk about twenty-five years in the industry leads me to asking Vinnie what is was like for bands like Reel Big Fish, Less Than Jake and The Mighty, Mighty Bosstones back then. “People didn’t understand what we were doing,” he says. “And there were purists who just like ska music and they didn’t understand what Less Than Jake was doing. There were people in the punk scene who just liked punk and looked at us and went: ‘we really don’t know what you guys are doing, we like The Clash, but you guys sound like Green Day doing some weird cover.’ People didn’t get what we were doing but it was only a matter of time before we started to meet other bands who were doing similar stuff to us and that was like finding a long lost brother. We would show up in Detroit and there would be the Suicide Machine and we’d be like, ‘Oh, my God, you guys understand what we are doing.’ Then you would go to Chicago and meet the guys from Slapstick, and be like, ‘Oh, you guys understand exactly what we are doing and what our headspace is.’ It was meeting long lost brothers when that was happening because there were so many people not understanding what we were doing at the time. Some people would listen and be like: ‘this just doesn’t go together, this is stupid.’ But after twenty-five years, it is still here – it is a sound – and it has survived. And there have been a lot of other genres of music that have come and gone in those twenty-five years.”

Vinnie says that his love for ska punk started with just one band. “Operation Ivy was where it began for me,” he says. “I listened to that and just thought, ‘This is awesome.’ It was like I was feeling all of the feelings that I should be and it was only after that I heard things like The Bosstones and they had more rock to it than Operation Ivy was. After I had heard Operation Ivy, I bought every single record I could, and to be honest; I didn’t know what Operation Ivy was. But I bought it to take a listen to and it turned out to be this punk mixed with this up-stroke guitar and I didn’t know what it was called but it was like – what is ska music? I wasn’t educated in anything before the third wave, and then all of a sudden we found this band called Snuff and Snuff is from England – they are still around. But Snuff was a massive influence on us because they had this trombone player and they were doing this fast pop-punk, and then me and Chris were talking about it and we were like, ‘Okay, what if we do this and add ska to it so we have horn players and we are playing pop-punk but we have this super fast ska sound and mix it together?’ And we didn’t know what we were doing at the time, but simultaneously there were all these other bands that were doing it at the same time. It was awesome!”

I just had to ask that with a back catalogue now that stretches over twenty-five years, just how difficult is it for Less Than Jake to put together a set list for any given show? “At any given time we have like sixty or seventy songs that we can turn to,” Vinnie explains. “So we kind of just stick to the ones that we know that people want to hear and then we add in some weird B-sides and things like that and perhaps people don’t go crazy for them but people that are our fans and have been Less Than Jake fans for years will be stoked by that. You know what is weird though, whenever we have come down to Australia, we have never brought the full show with us. Without giving anything away, normally at a Less Than Jakes, there is weird confetti and toilet paper guns, but because of space and because of the cost of lugging that kind of stuff around, we’ve never really brought the full show to Australia. But this time we have decided that: ‘Hey, we are going to Australia and we are going to bring the full show down.’ So, yeah, there will be confetti, toilet paper guns, and some weird smoke machines… we’re bring it all down.”

And if you are thinking that you want to accidentally run into a member of Less Than Jake while they are in Australia, then you might want to check out the local coffee shops and alleyways. “I think all of us are looking forward to hitting the cities and just hang,” says Vinnie. “I am a huge street art fan, so you have Sydney and you have Melbourne and Brisbane that all have a massive amount of street art. I just like to feel the vibe of a city. The Australian flat white is also weirdly enough some of the best coffee that is on the planet, and all of us in Less Than Jake are huge coffee-heads. So I love to go and grab a flat white and then walk around looking at street art. You know, I just like getting weird, man. I like to make a wrong turn on purpose and just see where I end up. I just walk around the city and see what happens. I’ve been up and down those alleyways in Melbourne – especially in the China Town area, those allies go all the way back to the Museum that is down there. There is great street art all the way through that area, and of course, Less Than Jake are very big fans of Cherry Bar.”

Less Than Jake will be touring Australia in October.