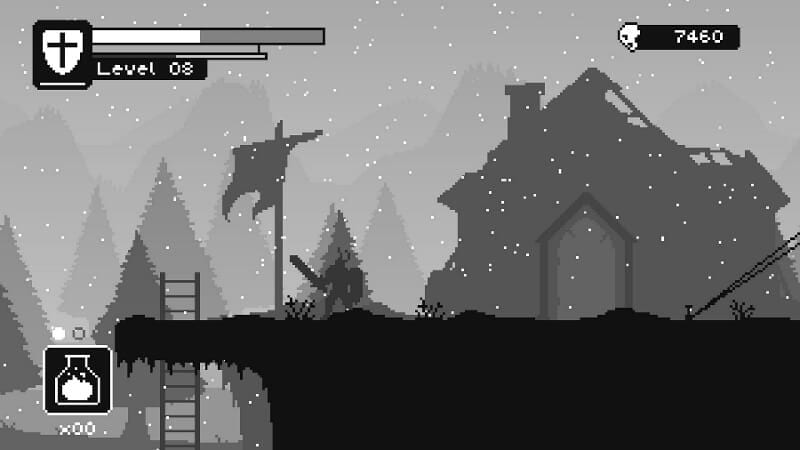 When I first saw Unworthy’s trailer footage, my first thought was that dev Aleksandar Kuzmanovic had taken a very difficult task upon himself: to compete in a market of side-scrolling ‘soulslike’ games (‘scrollslike’, if you will) with severely limited graphical and combat systems. The pixel-art is minimalist, the colours restricted to black, grey, and blood-red. Unworthy stands against hundreds of vibrant, gorgeous action-platformers with far larger dev teams. Alek is Unworthy’s sole developer.

As we got to talking though, doubt washed from my mind. Alek knows what he’s talking about.

“Unworthy is a hardcore, combat-focused Metroidvania that lacks a jump mechanic. The level design is structured around combat and understanding enemy attack patterns and their weaknesses. There is a lesser emphasis on platforming. I would say a lot of basic enemies in Unworthy rival complexity (both AI and design) of bosses in many other Metroidvania’s.”

In Unworthy’s demo, I encountered a dark, oppressive atmosphere that punishes mistakes and demands not only good judgement but swift reactions from the player. The art-style, I found, adds an extra layer to this atmosphere. Sacrificing the savage beauty and sweeping vistas of other soulslike’s, Unworthy seeks to isolate: it’s just you, your controller, and a grim, dangerous trek through merciless lands.

Unworthy’s graphical design is a significant and deliberate choice. I asked Alek to explain his decision – the benefits and drawbacks of minimalist, grey art – and he was happy to enlighten me:

“The art-style is bleak and minimalist: basically grayscale palette with a splash of red for blood. I was inspired by the artistic direction of Sin City. I feel the splash of red on an otherwise colourless canvas really makes for a compelling composition. There’s definitely pros and cons to this choice. For example, creating smoother animations with large sprite sizes is more manageable, in terms of both time consumption and dynamic memory on machines. The drawback is it’s often very challenging to create unique and memorable environments. When using the silhouette design, you have to rely on the predisposed knowledge of the player, i.e. using objects that they’ve seen in the real world and their brain can quickly recognize. If I were to introduce some completely foreign static shape into the equation, it would be extremely difficult for the player to understand what it is without the suggestions of 3D contours that would otherwise be present if a traditional pixel-art approach were taken. Again, this can sort of be mitigated with the use of animations. When an object is animated (even silhouettes), the human brain is naturally able to make connections and get more information about what this object likely is, based on things it may have seen before. So, yeah… in a sense, animation is my extended colour palette.”

A great amount of thought obviously went into Unworthy’s design. The deceptively simplistic style emphasizes the player’s own thoughts and interpretations, focusing on a few vital mechanics and polishing them until the gameplay is tight, intense, and tactical. Since Alek could speak so elegantly on art design, I asked about his vision for Unworthy’s combat and the challenges of making such a system:

“Well, first of all, designing a 2D game in which I’ve effectively eliminated one axis of movement (jumping) definitely makes it more complicated to design with traditional wisdom/knowledge. I mean, when you think about it, jumping is pretty much the bread and butter of most 2D platformers. This means that a lot of my design decisions really have to be completely out of left field. The game has to be designed around the focal point of combat, as this is where the limitation of ‘no jumping’ really shines. Jumping is the single most powerful ability a player has in conventional platformers; it is effectively what makes them better than the enemies, it’s also one of the key reasons why bumping into an enemy has to cause damage in traditional games: it would be way too easy and uninteresting otherwise. In Unworthy, bumping into enemies on its own does not damage the player – you actually have to be hit with a swing or a projectile. This works for the game because of this 2D restriction, and it makes combat way more engaging. Every enemy is a real fight.”

As if that wasn’t incentive enough to play Unworthy, I gave Alek the chance to advertise:

“Well, if you like challenging games that don’t hold your hand, intense combat, and intriguing exploration, then this is definitely the game for you. I also think there’s something super special about any Metroidvania project that’s crafted by a single individual (it’s pretty rare, actually). There’s a cohesiveness to the whole thing: art and design work together simultaneously in a single brain as opposed to one pushing the other. I think this is often sacrificed when bigger teams work on such projects, and it’s often why one of the two aspects (usually design) ends up suffering.”