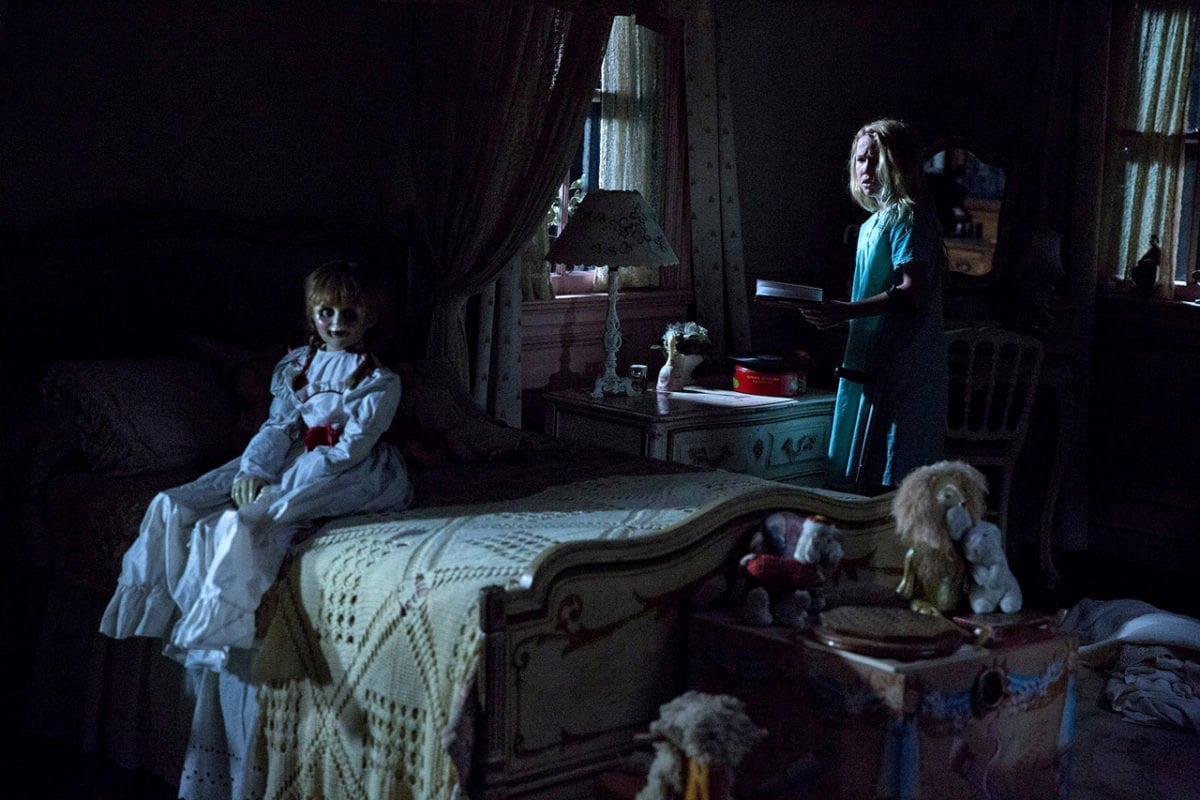 A few years ago, it seemed like horror movies were dead to mainstream cinema. Horror buffs were alarmed by the fact that it seemed that only one or two horror films a year were making it to the big screen in Australia… most it seemed were destined to go straight to DVD. One franchise seemed to buck that trend though – The Conjuring. When the original Conjuring hit cinemas, it not only won over horror films but was getting praise from critics as well.

Since then, another Conjuring film has also reached theaters while the franchise’s spin-off, Annabelle also got praise from critics and audiences alike. The film though left a lot of questions about the demonic doll who gave her name to the film. Not surprisingly, that meant that the studio soon announced that a prequel was to be released. Now that prequel – aptly named Annabelle: Creation – has hit cinemas, and two of it leads actors are Aussies: Anthony LaPaglia and Miranda Otto, who were only too keen to talk about the film which sees them play a very big hand in creating the horrific little doll.

“I read the script and was intrigued by the character and the whole world,” says Otto when she is asked what made her decide to do the film. “Then I went and watched Annabelle, the original movie, and I really enjoyed that. I love the production value in the movie, and I loved the relationship between the couple, and I thought it was just a really interesting story. Then I met David (Sandberg – the director), and then I really wanted to do it because I just really responded to him. Then I watched Lights Out and thought he had done a wonderful job with all the performances in there, and I really trusted him and thought it would be really fun to go on a journey like this with him.”

Surprisingly for LaPaglia and his body of work, he had never done a horror movie before, and he says that was one of the things that appealed to him about the project. “I had never done a horror movie before, so that appealed,” he says. “Then there was the script and the director. I had a meeting with him, and I really liked him, so it was not that hard of a decision. I play Samuel Mullins – he’s the dollmaker. Annabelle is actually his creation. You know ever since the tragedy that befalls them early on in the film, they’ve lived a life of total seclusion and then this bus of orphans shows up and he’s not that happy about it, but he goes along with it – much to his peril.”

Otto laughs at LaPaglia’s emphasis on the word ‘peril’ and adds, “I play Esther Mullins, who is Sam’s wife.  They’ve been happily married with a beautiful daughter, and then something terrible happens. So they go into a period of grief, and then they find a way to reconnect with their daughter, but that turns out that that isn’t really a good idea and that it’s not even really their daughter. And then in the modern day of the film, Esther is very mysterious, and you don’t really get a chance to get a glimpse of her because she is always behind the curtain and a mask. So you aren’t really sure what has transpired over all of those years and what kind of person that she has turned into after this tragedy, and she is one of those characters that kids make up stories about.”

For Otto, it is an interesting role because for most of the film she is hidden from view, and that was something that brought a level of difficulty to her character. “I felt what was important about her was that a part of her had died from that experience and that it was about the energy level of the character, especially when Stephanie comes in with the doll and it is all so dramatic. Before that, it is more about a sense of awakening within her to have these children in the house again – to actually dare to hope that the world could be a good place again if she dares to hope that again – and, of course, those hopes are then dashed…. I don’t know, you just kind of dig into all of those things.”

Then the talk turns to the evil herself – Annabelle and her role in the family. “Well, initially she was a replacement,” says LaPaglia. “Something to replace the loss. Then it stared getting weirder, and they started making contracts with entities. I think it’s like if you were unfortunate enough to lose a child, there’s a desperation that goes along with that – like what can you do, what could you have done to change the wanting of them there or the expectation when things are caught short when a young person dies? I think his intent at the beginning was good intent; it was a placebo I guess in a way; a way of filling the hole, but it doesn’t.”

With such a dark topic as the loss of a child explored in such depth as in the film, Otto says this is a film that will make its audience stop and think. “I think it’s a subject that people don’t like to think about,” she says. “I mean, I don’t like thinking about it myself, but I think you feel empathy for that situation. You think if something like that happened to me and I had the chance to feel the presence of my daughter again or have some resemblance of her, even though I couldn’t have real child to love and to hold, but if I could just have a little bit of that back –what wouldn’t you do to have that?”

“That’s why mediums do so well,” adds LaPaglia. “They sell that!”

“Just to have that little bit of light for a minute is so tempting,” continues Otto. “And I mean, they don’t know that when they have notes being sent and that, they don’t see that as something evil. They don’t even see it as a presence: they see it as a blessing, as some kind of miracle.”

“But Annabelle doesn’t play well with others,” says LaPaglia laughing. “It all comes back to single child syndrome.”

Annabelle: Creation is in cinemas now.