INGLORIOUS: MMXXI Live At The Phoenix 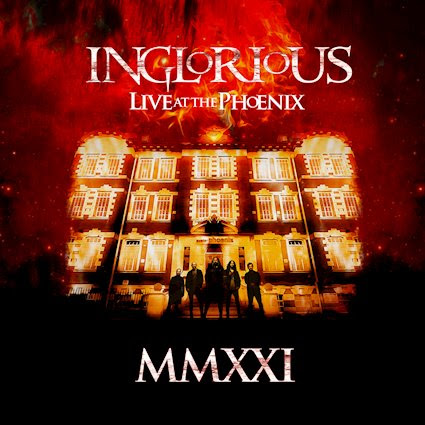 Inglorious have been far from idle while parts of the world around them have crumbled.

Following the release of We Will Ride in February last year, Inglorious rounded out 2021 by releasing Heroine, a covers album showcasing songs sung by vocalist Nathan James in honour of some of the female vocalists that have shaped his musical career.

Now, the British rock machine are back again, this time with a live album recorded only four shows back from an enforced layoff of well over 12 months during the pandemic.

MMXXI Live At The Phoenix is a bold and ambitious move by Inglorious, taking live rock to the people when the people couldn’t come to it.

For some reason – possibly because I have played it too many times – opening track She Won’t Let You Go won’t play on my advance copy, but I can tell you from many previous listens that it is a fantastic start to the show, filling the room with walls of guitar and vocal depth that almost transforms you from your lounge room to where this album was recorded live at The Phoenix.

Messiah rolls off next, a restrained yet still powerful offering from a band that should be on more people’s lips than they currently are. The song builds tempo beautifully, James’ majestic and soulful vocal chops dominating without overpowering.

When he finally does drop his lollies towards the end of the song it comes with an almighty scream that sends shivers up your spine, the rapturous applause of the crowd a soothing reminder that these guys can also bring it live.

As the guitars introduce Breakaway and gather momentum, it’s almost like a race car gone off the rails in its sonic intensity.

It’s worth pointing out here too that this particular incarnation of Inglorious has only been together for one original and one covers album prior to this, not that you could tell based on the obvious stage chemistry and cohesion exhibited across the board.

Seldom do live recordings capture the energy of actually being there, but at the right volume and lighting, you could easily place yourself front and centre of your imaginary lounge room stage.

A wicked guitar solo brings Breakaway further to life, the interplay between the two guitar leads of Danny Dela Cruz and Dan Stevens raging unabated throughout.

Where Are You Now? is next cab off the setlist and the track brings things down a notch, but still without slowing the pace and structure.

This is a basic but rollicking rock number with a big, catchy chorus that seems to mourn in time with the guitar changes.

James has one of those voices that make you hate him. It’s honestly that good.

It doesn’t help that he is an affable and cheery gentleman to boot, so when he pulls back to allow his two guitarists to flash their wares you can almost picture him doing so brandishing a perfect smile with china white teeth and a smug look that lets you know he has just nailed the fuck out of it.

As we wait for Read All About It, the guitar slowly spanks the air before setting off on an unseen mission, the band chiming in on point to create a massive wall of sound that would be epic from next to the speakers.

James’ voice is the star of the show here and on every track, controlling the musical chaos with soaring high notes that are accentuated by restraint and knowing just when to pull the trigger and when to click on the safety.

Many singers of this ilk tend to overplay their hand and have you clutching at air by around this point, the obvious attraction of having more octaval reach than the majority of the population too much to resist.

James seems to know where that balance lay and deftly reigns himself in at times where most would ride the wave of emotion and ultimately wipe out before the final act.

The guitar work in this track is a highlight, each working in tandem and playing with each other instead of against.

Heart’s classic track Barracuda shimmers to the surface next, the lone ranger style musical roll keeping a steady beat while the rest of the band go metaphorically fishing.

James introduces this as his favourite song, and he attacks it as though it just knocked back his advances.

It is a song that needs nurturing rather than guiding, which James does in typically rocking fashion.

The soothing religious sounds of Holy Water are up next, a track from the band’s first album Inglorious 1 and one which is introduced via the slickest blues guitar intro this side of Motown.

The original version of this song is one of my favourites but things are ramped up another couple of notches in the live setting with James holding the swagger on the strength of his voice alone while the rest of the band ease in behind him and stroll along at a leisurely but timely pace.

This is one of the songs where James could belt the living daylights out of the vocal delivery – and justifiably so – but once more he holds back, opting for impact over saturation and the song is so much better for it.

Dan Stevens takes lead midway through, his nimble fingers capturing the essence of soul beautifully as his guitar runs headlong into a perfectly weighted lead intro of sorts before Dela Cruz takes the reins and powers things up until James lets out an almighty wail which could even knock those partaking in the Holy Water off their perch and plummeting into the abyss known as the human race.

Speaking of favourites, He Will Provide falls into line next, an almighty guitar solo leading the charge before the second guitar swings into gear and away we go.

Rock has never tasted so good – not on disk anyway – and Inglorious seem to be revelling in their own spotlight, laughing with the unseen crowd while James messes up yet another potential live single by allowing obscenities to fall from his lips while thanking the faithful.

He actually brought that up in a recent interview that he had planned on refraining from the evil cuss words during the show in the hope some of the recorded footage could be released as singles, but from what I can gather so far he right royally fucked that up on every song but I doubt anyone would care.

The frontman is obviously swept up in the emotions only playing live can ignite, and if he wants to say fuck for breakfast then why the fuck shouldn’t he?

Anyway, I’m off on a tangent, just in time for He Will Ride to wind up before James introduces a track from Inglorious II in the form of I Don’t Need Your Loving.

Very presumptuous title there. What makes him think I was offering…?

The driving rhythm section again carries the bulk of this song into existence, with James settling in for the long haul, despite the clock calling time in one or two more songs before the usual timeframe for a concert is up.

The title track for last year’s We Will Ride kicks into life, with Inglorious sounding as fresh still as they did when they struck their first triumphant note of the night some 10 songs earlier.

The pace of this set, something you don’t usually factor when listening to an album, is designed for maximum impact, with the few slower-paced tracks buried among enough that throw their balls to the floor to maintain momentum.

Again, I find my mind drifting to thoughts of having actually been front and centre for this show and that right there is proof that Inglorious have achieved what many bands only wish for when releasing a live album.

They have captured the spirit and essence of a live performance and translated it to disk without leaving too much on the dance floor. It’s a fine balance and not one squarely at the feet of the band who also have to rely on sound technicians and recording equipment to deliver the full package.

Each cog in the wheel has played their part exceptionally with this album, while unfortunately, it is likely only the band who will get the accolades.

It’s all good sound crew, someone has noticed and that someone thanks you for making the improbable possible.

You can never replicate the experience of actually being at a concert but for once this is close enough.

As Until I Die fades into the background and James finds time for a couple more cuss words, the only thing missing is the ringing in the ears and smell of stale sweat.

And the best part is, MMXXI Live At The Phoenix also comes with a live DVD to accompany the CD, so you get to live through the whole experience again in high definition.

How fucken good is that?