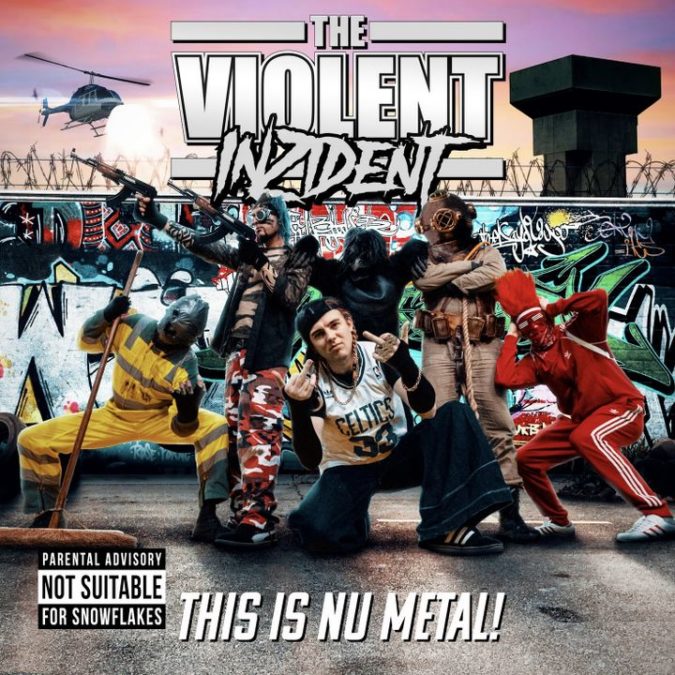 The Violent Inzident have beaten a steady path to their debut album This Is Nu-Metal!, rolling with the punches delivered by a world in the grips of a pandemic and throwing them back with equal force, albeit of a musical nature.

The band are the self-anointed saviors of Nu-Metal, and, judging from the three singles released already and the wealth of video interviews accentuating the band and the characters that form its nucleus, they are a band that delivers as much by the way of musical comedy as they do with musical prowess.

Thank fuck for that.

Things are far too serious in not just the music industry, but the world at large in the current global climate, so if these guys deliver even a quarter of the thrills they promise, then they are already a cut above many other new bands staking their claim.

In case you have so far managed to avoid the hype surrounding The Violent Inzident, allow me to bring you up to speed before we get into the album.

These guys are basically a parody Nu-Metal band that takes the piss out of anything and everyone, especially their contemporaries in the Nu-Metal scene.

They are rude, crude, crass and abrasive – and that’s just their hair styles!

Opening track Nu Metal! is also the band’s lead single, and begins amid a swirling of noises that is soon drowned out by a groovy interlude that sees vocalist Tiny D take direct aim at the “cool” kids and proclaiming the virtues of the genre The Violent Inzident is seeking to dominate.

It’s catchy as fuck, with a bottom end that could easily stomp the sass out of any minority music groups that dare to step in the path of TVI.

When Tiny D starts bemoaning “I’m crazy as fuck, and I really don’t care”, it’s almost like a warning, daring you to venture further.

I Love Nu-Metal is up next, and already I’m sensing a pattern forming…

An almost disco-type intro introduces Tiny D once more, and the tone of the album has shifted considerably between tracks one and two.

This starts like a rap metal number, invoking memories of the early days of Linkin Park without the obvious emotional connotations.

I hate rap metal, but this isn’t too bad at all, with the lyrics taking aim at the whole stigma that surrounds it with a powerful delivery that ebbs and flows with each mention of some part of the human anatomy.

Whores Of Instagram bursts to life on the back of a guitar riff that could slice bread, immediately conjuring thoughts of System Of A Down that are cleverly delivered by way of animal noises before the rapid-fire vocal delivery leaves no doubt as to the direction in which this song sets its sights.

General Jerkhov decides to cut loose on the drum kit, double kicking and firing salvos before the chugging riff takes charge and, coupled with the rapid vocals and angelic harmonious interludes, alerts us to the horrors that lurk beneath the inviting exterior that is Instagram.

This track is like a war within itself, each instrument being attacked ferociously at various junctures, showing that TVI are also musically adept as well as capable mocking birds.

Disas Tinder lines up another social media platform, this time one where many of us have tried and failed to find our one true love.

It’s another up-tempo song that shows another side to Tiny D’s vocals, with the frontman this time alternating between harsh and clean vocals with consummate ease. The lyrics that I can make out while also trying to write this sound like some form of advanced mode of sexual gratification, but I think it will take me quite a few more listens to fully gauge the scope and informative nature of the lyrics.

If I had to guess, TVI are paying homage to Papa Roach here, but it could be one of ten to fifteen bands…

Second single Triggered (The Snowflake Anthem) eases out of the speakers, a deliberately slow intro succumbing to a poppy little number that sides with the downtrodden and under-represented and takes aim at those who seek to undermine the world we live in.

This has shades of SOAD and Faith No More, but does so with enough gusto and personality of its own to almost cover the fact this is another piss take of some of the bands that were previously thought to be untouchable.

The film clip to this one really elevates the song to champion status, and I suggest you settle in with a six-pack of JD cans and invite your grumpy neighbours over to spread some goodwill and cheer through the community.

The song that gave the band their name opens next, and immediately you just know it is influenced by Limp Bizkit.

It’s quite extraordinary how TVI manage to capture the sounds of not only an era that gave birth to a genre, but also the bands who drove it.

Scratches and raps punctuate the track, with the whiny vocal delivery perfectly capturing its intended target. I doubt even Limp Bizkit could do Limp Bizkit this good anymore so kudos to you boys!

Third single Brazil Is Great is also the heaviest song so far.

Starting out to the booming sounds of someone calling the soccer, Brazil Is Great soon denigrates into heaviness, drawing instant comparison to Max Cavalera and Soulfly (which seems fitting given the use of Brazil in the title). The band starts counting in Brazilian and loses me instantly (I’m flat out counting to ten in English), but when Tiny D starts spitting out lyrics he seems to be on a tirade against the police mainly, but also seems intent on reminding us that Brazil is, in fact, great and points out some of the countries finer qualities to prove his point.

A nice guitar solo midway through is matched by a thunderous kicking of the drums from General Jerkhov, but this song belongs to guitarist Adidasshole, who leaves his DNA on this track more than any other so far.

By virtue of the name alone, I am guessing Down With The Mistress takes aim at Disturbed so let’s see how well I know my Nu Metal bands.

The guitar intro certainly gives that impression, before Tiny D does his best David Draiman impersonation, which is pretty fucken decent to say the least.

The song is taken from one of the slower sections of Disturbed’s back catalogue, but has all of the downtuned guitars and vocal stutters that were made famous by the band.

For some reason several words are bleeped out, and from what I have heard previously the words underneath must be pretty damn offensive because TVI haven’t held back on any level thus far!

Tears Are Falling (From My Arse) sounds interesting to say the least, and from the spoken word intro over the top of swirling guitars it seems like Korn are next to receive the treatment.

TVI perfectly capture the mood of early Korn, with the lyrics of the song hilariously wrong on all levels.

There are two sides to enjoy on this album. The music itself, and the painfully blunt and uncensored lyrics that put things in a completely different perspective.

Tiny D has fun here with the rap style grunts and whistles normally employed by Mr. Davis, spitting, snarling and scratching his way to what could be interpreted as the initial stages of a heart attack should one not know he is drowning under the weight of sarcastic fortitude.

D.A.R.E To Keep Kids On Drugs starts with a chant of drugs, drugs, drugs and associated sounds before kicking into a chilled-out but still rocking number that leans more to the lighter side of Nu-Metal.

Album closer Fou Fou also brings a touch of sorrow to proceedings in the knowledge that this journey through everything we know and love about Nu-Metal is about to come to an end.

It doesn’t disappoint, chugging into life with more ferocity than Thomas The Tank and again seems to pay homage to one Mister Max Cavalera, who definitely deserves multiple tributes for his contribution to the genre.

I still have no idea what the fuck a Fou Fou is by the time the song finishes, but that’s the whole point of This Is Nu Metal!

You aren’t supposed to make sense of any of it, largely because the whole album is meant to be nonsensical.

One thing that is certain is The Violent Inzident are far more than a two-trick pony.

It can’t be easy to effectively take aim at so many bands and artists and still entertain on all levels.

Normally an album like this would become lost in its own self-importance by the halfway point at the latest, but with This Is Nu-Metal! The Violent Inzident have managed to produce a collection of songs that is as entertaining musically as it is lyrically.

It can be enjoyed as a parody album, but also as a trip down memory lane with the bands and sounds that helped shape a genre.