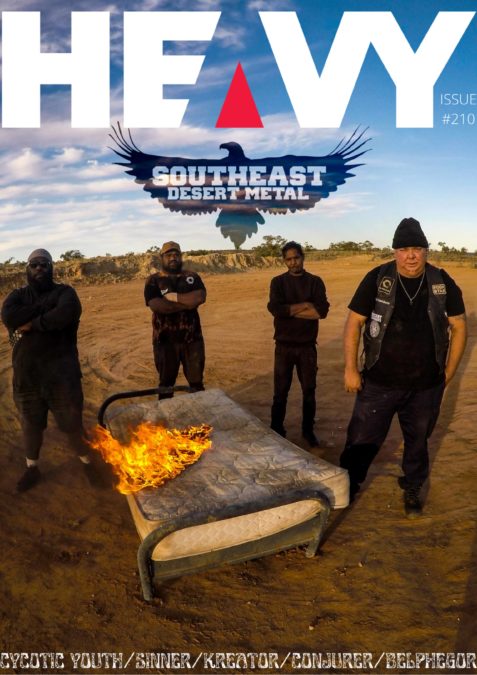 This week Australia pays respect to Aboriginal and Torres Strait Islander people with the annual NAIDOC week honouring their history, culture and achievements. And what better way to further that respect than by featuring one of this country’s best Aboriginal metal bands on the front cover?

Southeast Desert Metal have just released a cover version of Beds Are Burning by Midnight Oil and with an album in the not too distant future, as well as performing at Blacken Open Air on the weekend of July 29 to August 1, the hard working band deserves their place as this week’s face of HEAVY.

We also speak with Kreator, Sinner, Something To Scream About, HZED, Conjurer and Cryotic Youth plus bring you the latest tour news from The Iron Maidens, Hardcore Superstar, Red Hot Chili Peppers, Verticoli, Vulgar Display Of 90s and HEAVY’s Gold Coast Party at Mo’s Desert Clubhouse with From Crisis To Collapse finally getting to hit the stage after an enforced lay off.

There’s a heap of new music from Bring Me The Horizon, Norma Jean, ERRA, Consciously Dying, Venues, Mountain Eye, Parkway Drive, Gothminister, Observist, Invent Anime, From Fall To Spring, Ghast, Oceans Ate Alaska, Bad Wolves and Fall And Resist and find out what we think about the new albums from 800 Throats, Alestorm, Werewolves and Thirteen Goats.

HEAVY Cinema has the usual wrap up of Tinseltown so once you get through all of that head over to HEAVY’s newly updated Gig Guide and start planning your weekend.