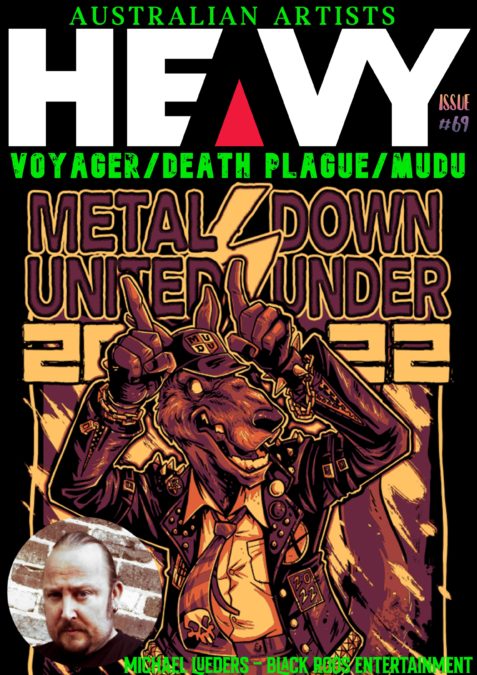 The travelling Under The Southern Stars Festival docks in Queensland this weekend, stopping at Caloundra today before heading to the Gold Coast on Saturday and Brisbane on Sunday so if you are anywhere near those cities and are looking for something to do this weekend get yourself an earful of bands like Rose Tattoo, Electric Mary, Bush, Cheap Trick, Stone Temple Pilots and Black Rebel Motorcycle Club. From all reports, all bands have been slaying it at every show, so get ’em while they’re hot!

This week we feature a man special to the Australian metal scene on our front cover.

Michael Lueders is the man behind the annual Metal United Down Under concert series, which this year enters its ninth consecutive outing as one of the most anticipated and celebrated local music events on the calendar.

Taking in almost a dozen venues around Australia all on the one day – April 9 – MUDU provides a platform for emerging and established heavy artists to have their music heard by the masses in a display of unity and solidarity seldom seen.

Michael joined HEAVY during the week to talk about the shows and the sensational legacy it has already built since its inception in 2014.

We also catch up with Voyager who stop in to talk about their narrow Eurovision loss, and Dam Kel from Death Plague calls in to chat about his double shot of shows this weekend and the new lineup.

There’s news and new music from Mountain Wizard Death Cult, Bad Juju, SuburbiaSuburbia, Northlane, The Wretched Creatures, Slowly Slowly, Wicked Envy, Void Of Vision and Cross-Eyed Lover, plus we bring you the latest news on tonight’s 10th birthday party for HEAVY at 11 Dive Bar, Eternal Torment being added to a stellar line-up at Vinnies Dive Bar on April 8, and the fourth edition of Metal Mistress which this week shines the spotlight on Jack White.

Live gigs are back, and just to prove it our review team give you the lowdown on recent shows from The Hard-Ons, Scene & Heard Festival, UNIFY and Under The Southern Stars and there’s also the usual round up of interviews, reviews and previews in HEAVY Cinema.

That’s me done, I have a birthday party to go to!