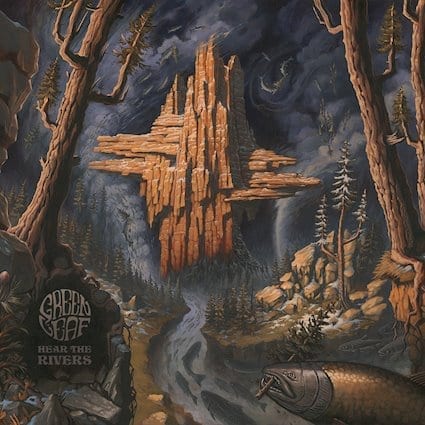 What started as a side project almost two decades ago by Dozer guitarist Tommi Holappa Greenleaf has evolved into its own four legged, white tusked mammoth, the Swedish four piece are now set to deliver their seventh studio album. Hear The Rivers produced by former Greenleaf and Dozer drummer Karl Daniel Lidén (Craft, Bloodbath, Crippled Black Phoenix to name a few) played a key part in keeping the traditional Greenleaf rock fury relevant and downright soulful.

With the pure rhythmic jousting of “Let it Go!” to kick things into gear Hear The Rivers fuses Rock and Roll and Stoner Metal flawlessly. It’s hard not to wonder why Greenleaf are not more of a household name, though keeping within the realm of respect and all things holy in Rock and Roll the people that know what these (mostly) beard clad lads are about understand wholeheartedly. There’s a certain type of rock sound that exists, in some ways its genre specific but more importantly its feel good and oozes straight up class act musicianship, “Sweet Is The Sound” is a pure example of just that, with a stomping drum beat and constant swirling rolls by Sebastian Olsson this track is the curve on a sphere.

A solid chorus is key to any track that will stand the test of time “Been kept in the shadows so goddamn long, I can see the distrust in your eyes, held in the dark what is going on? Could you bring me out in the light?” is sung by Arvid Hällagård with healthy amounts of soul and grace. This being the bolts that keep this track together but musically it’s constructed with hardened steel anyway so be it a hearty build nonetheless.

The stomp continues throughout “Good Ol’ Goat” coupled with the fuzz fusions of Tommi Holappa and Hans Fröhlich’s respective stringed instruments a more straight forward number though remains sturdy on its hooves all the same! No apologies for the purposeful goat genetics reference there.

Moving forward “We Are The Pawns” sees a slightly stripped back rock anthem, more of a story telling and mood setting track. The listener is sure to be engaged especially when the vocal harmony reaches its peak, the hairs are sure to stand up on one’s neck!

There’s a certain amount of sustain on the snare drum during “High Fever” which sees the pace pick up a tad, this track catapults the listener back to the 70’s with a swing and a jive that could see bell bottoms back into fashion. Be sure to grab your partner or obtain one if required, move the furniture and bop into the night with this one! It’s groovy baby!

Greenleaf managed to create a hearty amount of quality tracks on Hear The Rivers, some included above and others kept for the listener to personally chew on. The final track “The River Lullaby” sees Greenleaf’s finest work on their latest offering, it has to be said that certain songs just manage to dig into the soul a little further, setting off emotions that only the music gods can muster. The writing of “The River Lullaby” manages to do so in such a poetic and majestic way, seriously what a way to finish such a well-rounded album.

Proving is not required Greenleaf are an integral piece of the Rock and Roll and Stoner Rock music world, the four piece have solidified just that on Hear The River.