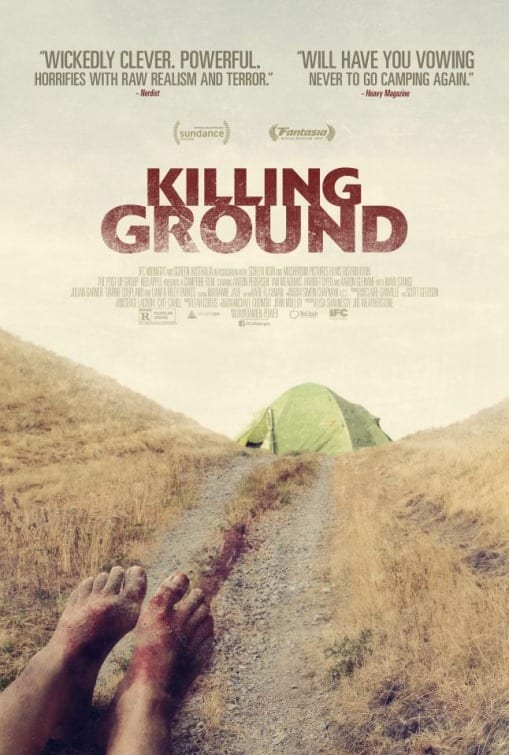 Australia has always been a country that knows how to make good horror films, even big time directors like Quentin Tarantino openly admit that it was the early Ozploitation films that started them on their bloodthirsty quest. Well now the Aussie horror class of 2016 is starting to present itself to the public and excuse the pun, but we’ve got some ‘killer’ films including the magnificent Killing Ground.

Killing Ground has a pretty simple storyline. A couple made up of young doctor Ian (Ian Meadows – Scar Campaign) and his devoted girlfriend Sam (Harriet Dyer – Ruben Guthrie) head to the bush for a New Year’s camping trip. On arrival at their picturesque camping spot, they find the belongings of the camp’s previous visitors, Mum Margaret (Maya Stange – Garage Days), alternative Dad Rob (Julian Garner – Head On), troubled teenage daughter Em (Tiarnie Coupland – Love Child) and their toddler. But there is no sign of the family at all.

Then when the toddler turns up, soon Sam and Ian find themselves being lured into a trap by the psychotic locals German (Aaron Pederson – Mystery Road) and Chook (Aaron Glenane – Drift).

It is the simplistic nature of Killing Ground that makes the film work so well. While supernatural horror is always good for a fright here and there, it is the realistic horror like that depicted in Killing Ground that disturbs its audience. To his credit director/writer, Damien Power (first-time feature director) keeps the naturalistic feel to this film right throughout, allowing the deadly cat and mouse chases through the bush to create the suspense rather than stooping to cheap scares.

Power also needs to be congratulated for not following so many other horror filmmakers out there and toning back his film. The scene in which Chook and German torture the family may be hard for some audiences members to watch but it is also one of the things that make this film stand out from the hundreds of other horror flicks released this year. Likewise, some of the dialogue used by Sam and German may not be politically friendly, but sadly that’s how psychos like that speak.

With such an intense film it is little surprise that the acting here is top notch. Ian Meadows backs up his recent excellent performance in Scare Campaign with some strong acting and alongside Harriet Dyer and young Tiarnie Coupland (who gets put through screen hell) announces himself as part of a talented bunch of actors to watch in the future. Aaron Pederson apparently enjoys the challenge of playing the villain instead of the hero, and he is well supported by Aaron Glenane who plays the deranged Chook very, very well.

Killing Ground is a vicious horror that stands out thanks to some amazing work from director Damien Power. The naturalistic feel of this film will have you nervous in your seat and vowing never to go camping again.