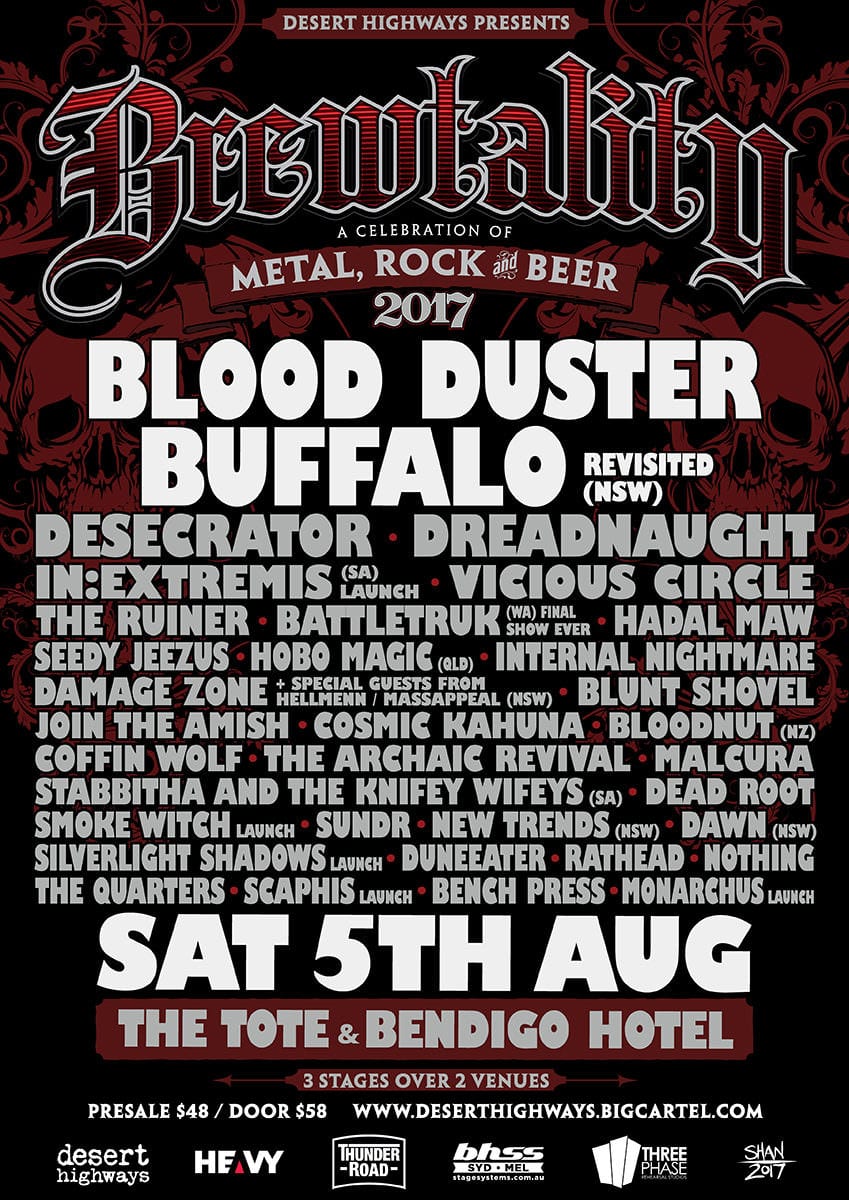 My Saturday started REEEEEAL early and went REAAALLLLY LATE. I thought, being a seasoned veteran at these kinds of all day events, I could see Sunday in unscathed and smile at my achievements. But, OHHHHHH NO! Let’s get into that later (We have Blood Duster to thank for that one, as I am sure a lot of us do!)

The day officially started as soon as the Mighty Tote opened its always welcoming doors at 2 pm to get passes. I met mates and fellow early comers, and we then made our way back down Johnston St to the beautifully brutal ‘Bendy’.

The first band to hit the ground running was Nothing. A great three-piece death/thrash style band containing some excellent musicianship, fierce grooves, vocals harshly spewed forth, and honestly, in the ‘tells it as they sees it!’ attitude and delivery.

Next up was a band I had never heard of, much to the scoffing of my comrade-in-arms for the day (thanks for the heads up, Mr Walton). That band was Dead Root. A two-piece guitar and drum combo of no-holds-barred ‘fuck off grindcore’. The advice I was given was to watch and hear them and consider the band name when experiencing the whole Dead Root package. Meant as a ‘don’t give a shit’ attitude and perfect encapsulating that ethos. And if your mindset is closed, and you don’t go for all art as it is thought and created, then you aren’t going to ‘get it’ or them. With Luke’s advice, I gave Dead Root my undivided attention and came out the other side enlightened and a fan. They are as go-and-get-fucked as any band can be, and that was a good thing.

On stage were some of the best musicians present the whole day playing their metal brand of not-metal, which was loved and applauded by all. Put simply: Malcura. A three-piece instrumental Flamenco powerhouse that is played by metalheads for metalheads and contains no metal whatsoever. Best described, I think, even though Malcura were on so early in the day, they are that band that is the perfect mid-album interlude that every heavy album needs. Something subtle to calm us in preparation for the onslaught of insanity that was the remainder of the day to follow.

Band four, beer-in-hand, and what I next heard on stage upon looking forth, I was not expecting to see the person that was screaming forth so magnificently from it: Scaphis. A fierce and awesome black/death band featuring the incredible lady, Spyke screaming from a superb set of lungs and throat and back ably and superbly by her brothers in arms. Scaphis were definitely both mine and a crowd fave for the day, and they clearly have a huge and well-deserved fan base: which was evident by the abundance of Pantene-styled hair that was flailing magnificently throughout the room, and rightfully so. They are heavy as fuck and just awesome. What I need to mention here is that the best part about going to events and all events like this and getting there early is to discover bands we as avid fans and lovers of music have yet to discover. And I for one was magnificently inundated with new music for a fair majority of the day. Check out Scaphis as soon as you get the chance. Trust me, if black/death metal is your thing, they are worth your time.

Let’s talk about Blunt Shovel, shall we? If you have yet to read or see or hear any of my repartees on the Shovesys, then let me tell you all about them. They are the best metal band to come out of Melbourne this side of a decade if you want my humble and honest opinion. This is my fourth time seeing them in almost as many months. Their album, Get in the Ground is without question in my top three releases for 2017. They are a lovely bunch of blokes playing angry fucking music with their tongue firmly planted in their cheeks. Some call ‘em death, some call ‘em thrash, I call ‘em a bit of this and a bit of that. Either way, the Shovesys is well worth parting with as much of your hard earned as possible. Come for the show, buy a CD and a tee shirt. I did, and I would give more if I could. Every Blunt Shovel show is a special moment where the band and the crowd are joined in a brother/sisterhood that proves the Australian metal is bonded by blood. So that being stated, you dear readers may stop reading here for a few brief minutes – go watch their two clips on YouTube: “Destination Dog Food” & “Tongue Hung Pinata” and you can thank me later.

Okay, so we’re over halfway through Brewtality and not even close to our day being over. So… onwards we marched, and next to grace the stage at the Bendy was Damage Zone who represented the first of the punk rock contingent for the day. And that is exactly what we got from them good ol’ dirty, straight-up fucking punk rock. We were appreciatively hammered and nailed to the wall by Damage Zone as purposefully and unapologetically as punk rock demands. Nothing more and nothing less. Thanks, lads, it was gold!

Internal Nightmare blasted forth from the ever capable PA courtesy of the Bendy next with their style of core-driven brutality. Thirty well spent minutes being pummeled ably by an angry horde of blokes faithfully delivering their influences in death/grind/thrash. They are supporting Frankenbok on their Melbourne leg for their album launch in a few weeks, check ‘em out. Internal Nightmare is a band that will have you walking away happy you witnessed their extremity.

It was here folks that I made the trek a block up the road for a well-deserved pint and some stoner to get the rest of my evening as rocking as fuck. And it was 8:30 precisely when I had my first ‘WOW’ band for the day. Seedy Jeezus. I say WOW purely because I find most stoner for me to be hit-and-miss. Generally miss, because I find it meh and not my thing. But the Seedy Jeezus three-piece of excellence gave me the feels, just like my first time with Clutch. MAGIC! The energy, fun and sheer on stage hypnotism were refreshing and an absolute pleasure to experience. I immediately turned into a fanboy and went and introduced myself to vocalist/guitarist, Lex to let him know how awesome I thought they were. Seedy Jeezus was, for me, almost the complete and perfect package where everything for a measly half an hour comes together so perfectly, we were privileged to be in the same room as them.

It was at this point I needed to take a well deserved musical hiatus, recharge my batteries with a pint top up, and a half an hour to chill out before I was crushed by the onslaught of the next three hours.

Dreadnaught… For twenty-two glorious years, they have been at the forefront of Australia’s heavy music scene. Never compromising or delivering anything other than excellence, Dreadnaught’s members have been and gone, but one thing has stayed pure and true: that is the incredible presence and voice of Greg, Richie on guitar, and Ando on bass. Ably and perfectly backed by new guitarist, Neil, and then by Marty on drums, Dreadnaught delivers each and every show like it was their last and that it was going to be the performance of their lives. Tonight’s performance at Brewtality was no exception. With a back catalogue of amazing albums and songs to choose from, we are only going to hear a set of unsurpassed art from the speakers gifted by Dreadnaught. For any readers under the age of twenty-one, please promise yourselves if you’re a fan of heavy, passionate and heartfelt music that you will see Dreadnaught once in your gig-attending lives.

The penultimate act for the evening was Melbourne thrash lords, Desecrator. There is no grey area surrounding these blokes. They are as late ‘80s, straight-up fuck-off thrash as it gets and they are great. With headliners Blood Duster aside, it is a band like Desecrator that is a perfect example of why we as a Melbourne metal collective comes together. With thanks to and because of the passion of Desert Highways and their ilk. Heavy music is, as we know, ignored and never played by any mainstream outlets, but it is nonetheless highly regarded and respected and loved by many after the last of the so-called “Pop Icons” and “The Voice” wanna be superstars for their five brief seconds. We discard our egos and appearances and act as we truly are. Straight up, honest, and to the point with regard for those who may or may not have an opinion. Desecrator was fucking awesome. Nothing more and nothing less. Thanks for not ever compromising lads. It doesn’t go unnoticed!

And now our day/night of heavy metal extravagance is drawing to a close and all that is left is Blood Duster. Let it be said that stepping beyond the safety of the bar at a Duster show is to take your life into your own hands, and I have experienced that on many, many occasions over the past twenty-five years and this year’s Brewtality Fest was no exception! The mosh pit was the entire size of the Tote. An unapologetic, frenzied pit of magnificence and crazy as Blood Duster themselves. In Jason PC’s own words on Facebook the next day, it was a loose free-for-all. We, the people take the risk into our hands because make no mistake, punters love Duster. What was Metal V’s reward for braving Brewtality’s Blood Duster show? A substantial kick to the head and the shattering of my prescription glasses, and I wasn’t even mad. Because at the end of the day, Blood Duster was a perfect end to a perfect day. Brewtality has become an institution of sorts over the past few years, and I sincerely hope it remains so.

Thanks so much to everyone involved: bands, punters, bar staff, Anthony & Desert Highways for making Brewtality 2017 the best by far.

See you all in the pit next year!