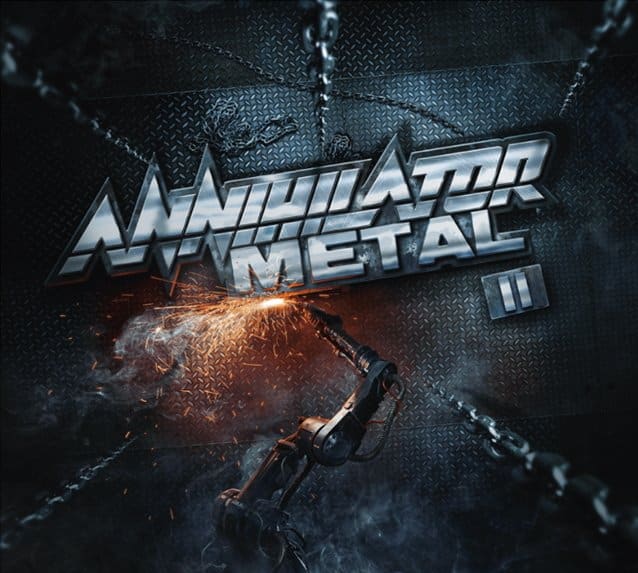 Annihilator have been around forever.

The band have released 17 albums and are officially the highest selling Canadian thrash metal group in history but as impressive as all of those figures are none of it means anything if the music is shit.

Somehow, I doubt that’s the case, but seeing as how their new album Metal II is my first taste of Annihilator, I shall reserve judgement for the time being.

Album opener Chasing The High starts impressively enough, guitars smashing before an almighty UUURRGGHH bellows from the depths of hell and the ferocious double kicks chime in.

Already this is thrash metal at it’s finest!

Vocalist Jeff Waters sounds as though he was screaming this shit in his mother’s womb, and the timing and precision of the other players is flawless.

Funny how your opinion can be swayed so quickly. Not that I’m easy, I just know good music when I hear it.

My head already aches from the uncontrollable snapping forced upon my neck and I’m not sure how I will even last the eleven tracks here.

The pace slows considerably around the middle, a pulled back musical interlude showcasing the softer side of Annihilator. At first, it doesn’t feel quite right but grows on you somewhat before the guitars wail once more, the drums smash and another growl returns us to our former glory.

Downright Dominate asserts its intentions early, guitars once more controlling proceedings and intensifying as the track kicks into gear.

No wonder these guys have the impressive figures I mentioned.

They fucken deserve it.

Waters half barks, half sings, full menaces his vocal lines, sounding a touch like one mister Phil Anselmo in his glory years.

Which is a good thing.

I can imagine this is what stepping into the ring with Mike Tyson would have felt like, every orifice being pummelled in an unrelenting display of aggression that strangely feels right despite the intended pain.

Doubling in his role as lead guitarist, it is beyond me where or how Waters manages to do so much, his fingers working overtime while his vocal cords get some respite.

Army Of One is obviously a show of inner force, and from the steady intro it is also one of control.

This has more of a chuggy feel to it, although the early guitar wizardry threatens to consign that quickly to the depths.

An almighty wail precedes a more accessible vocal delivery from Waters. When I say more accessible, I mean it doesn’t feel like he is in his face directly, spit dripping from your jaw as he flays at you from close quarters.

Couple Suicide has a more rock tone, with the vocals super clean.

And Waters can actually sing well too.

This is a change of pace completely, still fast and driving, but more in a hard rock vein than the thrashiness that has come before.

I’m enjoying it, but where the fuck did it come from?

Annihilator are nothing if not unpredictable. If a thrash metal band ever had a chance of being played on commercial radio, then Couple Suicide is the track that will do it.

Heavy Metal Maniac just has to be cool, just for the title alone.

It kicks in similar to Metallica’s Hit The Lights but soon veers in its own direction, another hard rock number that is sung rather than yelled.

I have to admit to liking these last two songs a bit more. They have a steady, foot tapping beat with enough in the way of metal to elevate them beyond rock.

Haunted comes in at just under 9 minutes and eases into life with some creepy background noises before a baby starts crying, and the guitars decide that this is an R rated tune and drown it out with hard riffing.

This is more of a guitar driven track and I honestly have no idea how these guys manage to move their fingers that quickly without blurring the lines of reality.

The thrash has returned to the table and does so with intent.

Annihilator are one of those bands that you have to love but also shit the pants off you because they seem to be good at everything.

More guitar solos appear before things are pulled back to bare bones and a haunting guitar line pulls things back into perspective.

Annihilator manage to throw sections like this into their songs, completely changing the structure but without affecting the impact. It’s something I haven’t heard many bands do successfully in the past, but these guys could do it in their sleep.

Haunted is now a rock song with cleaner vocals and is the perfect song to showcase the musical diversity and disparity within the group.

Romeo Delight steps back into a punk fuelled track that again brings out the inner rock monster lying within Annihilator.

It’s almost a bit like early KISS in parts, but also draws influence from the Sunset Strip inspired rock of the 90s.

All of these genres shouldn’t work together but they somehow do which speaks volumes for the musical ability of the four men pulling it off.

Detonation chugs to life in almost anthemic fashion, the repeated riff announcing more of a swamp rock tune that wouldn’t be out of place on a Down record.

Clown Parade takes over, a swirling mass of guitar bouncing around until Waters comes in all guns blazing and completing the thrash element of the song. There’s even some harmonies thrown in too, but this is another guitar led track that gets the body moving and the juices flowing effortlessly.

Smothered returns Annihilator to the hard rock psyche and is perhaps the most easy listening song on the album.

That’s not to say it is soft. Far from it. But I could imagine if your Mother walked in on this song she would leave the room a little happier that her child was not being tempted by the lure of heavy metal.

Little does she know haha.

By the time Kicked closes the album, I feel like I have been just that.

Annihilator have saved their most experimental track until last, and the stuttering musical foreplay hints at something akin to a Mars Volta track.

Bring it I say.

Each of the band members gets a turn at soloing away on this song, further proving their credentials, and it has that jam room feel about it where anything goes.

There’s shades of early Metallica all over this song – and most of the album to be precise – but as a thrash metal band is there anyone else’s fingerprints you would rather.

Annihilator are obviously influenced by the Big 4 of thrash metal, but name me a thrash band that isn’t.

Where these guys differ is that those influences form only a small percentage of their sound, which has been refined over nearly four decades.

Metal II is a great album and one which proves that heavy music is the best in the world, regardless of what label you want to place it under.