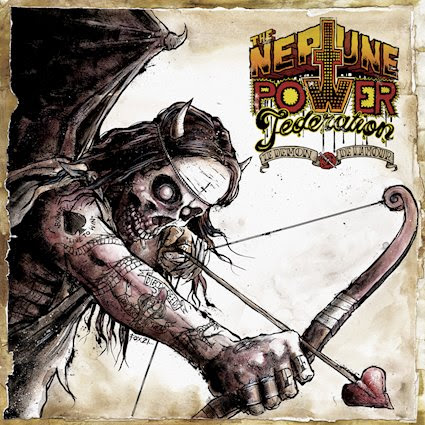 When the weirdest looking person in this band isn’t Jaytanic Ritual, a bloke that likes to rip bucket bongs and insists that the Russel Crow’s Band is a fucking pile of shit, you’d expect you’re in for some kind of musical treat.

It’s lead vocalist , and Jay’s wife, Screamin Loz Sutch that takes the cake in this one with her Evil High Priestess looking get-up. But I digress, who gives a fuck what they look like, let’s give it a listen and see how they sound because I have absolutely no idea what the fuck I am in for.

Weeping On the Moon opens the album with some dual guitar action reminiscent of an old school traditional metal intro. The song quickly kicks in and starts rocking along more like a pub rock tune. The rock eases up for thumping toms to push through, and we hear the first glimpse of Screamin Loz’s vocals. It’s an interesting and eclectic mix of pub rock and quirky pop style vocals. A drawn out, slow and mellow guitar and drum jam style interlude disrupts the rock for a short while before slowly making its way back on track to rock out of the track.

My Precious One rocks its way right on in at full intensity. Clean vocals slither over the heavy groove of the band, and when the choruses hit, we hear layers of melody behind the main vocal passes. A ripping guitar solo kicks in, which leads us to the outro. Fun little track.

The next track Baby is Mine is an odd one. I’m not even sure what to call it? Rock funk fusion or something like that? It bounces, grooves and funks, and I’m not actually sure I’ve heard anything quite like it to be honest. A guitar solo mid-song gives me something to relate to for a short while before the track gets even funkier with a very tasty, effected bassline. The chorus is pretty damn catchy in this one. So, watch yaself, it’ll grab ya.

Loving You Is Killing Me keeps up the funk vibe but with a little more distorted guitar this time around, and the odd break to straight rock. Well, it’s kind of sludge rock, or sludge funk, or something like that. As we reach the bridge, the guitars get a little heavier as they chug us along into a classical sounding clean guitar interlude. Eventually the song takes off again into an extended guitar solo and then back into the sludge rock. Diverse is probably an understatement for this band.

A rocking bassline backed with four to the floor drums rolls us into Stay With Thee, which very quickly rocks itself out. In an unusual twist as the chorus pulls back into a slower, more drawn out feel. It quickly rocks itself back into another verse as it seems to grow another set of legs. I’m stumped if I can explain the sound of these choruses, but who cares, there is now cowbell and its guitar solo time.

Next up is Emmaline which I believe is the lead single for the EP due to its accompanying video. The intro kind of reminds me of a Wolfmother song due to its sludge rock sound, which seems to be the most consistent element to this album. In saying that, the clean crisp vocals throughout the album really shine through on this track with melodies you could quite easily sing along to, or at least try.

A strange “nana na nana” kicks off the proceedings for Madly In Love, and the songs kicks into that sludgy riffage we’ve heard throughout the album. This time, though, it’s got a little bit more blues groove to it. The vocals hit an all-time high for the album as the cleans break up into some dirty wails. There aren’t too many lyrics in this track, but it still gets the point across that someone’s madly in love. Na na nana Na nana, riffy riff, end song!

We Beasts of the Night opens with a spoken word intro not too dissimilar sounding to the intro of Iron Maidens The Number of the Beast. In a twist of fate though, and quite unexpectedly, the track settles into an acoustic number. There is an unknown male vocalist in the track, creating a dual vocal attack. It does pick up pace as the distortion kicks into the guitar and the track becomes a classic rock number. It could be Jay singing the male part, but I won’t jump to conclusions, even though I just did. Not a bad end to the album when it starts sounding like something from Meatloaf (RIP).

Well, that was quite the experience. I had no idea what I was in for, and I have no idea what I just got. It’s quirky, and it rocks. That’s probably the best way I can sum it up. Give it a listen, you’ll either like it or you won’t. What the fuck y’all got to lose anyway, 40 min on twitch?

PrevPrevious.WISHFUL THINKING Ponder The Art Of Revenge
Next.Hanging With A GANG OF OLD LADIES With RICK “RAZOR” ROZZNext