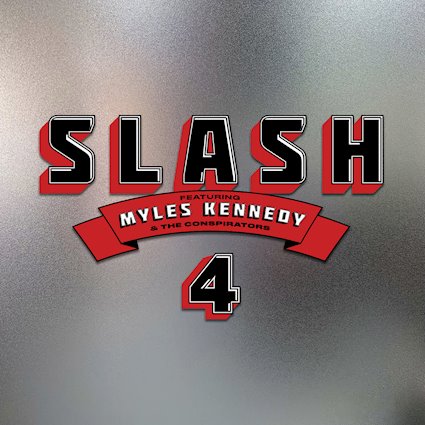 What do you name album number four when you are one of the biggest and best bands in the world?

Well, if you are Slash Featuring Myles Kennedy and The Conspirators, the answer is pretty simple.

And that’s about all the introduction you need when it comes to an album from Slash Featuring Myles Kennedy and The Conspirators because if you don’t already know what you are in for then, quite simply, you would not be listening to this record.

Opening track The River Is Closing bursts to life with the trademark Slash riffage, swirling and bouncing around an unseen cavern that seems to accentuate what we already know.

That Slash is one of the best in the business.

Myles Kennedy soon lends his throat to proceedings and begins in a comfortable and assured manner that signifies this is more than just a vehicle for Slash and his guitar prowess.

Over the course of four albums this has become a band rather than an entity, with each member – rounded out by bassist Todd Kerns, drummer Brent Fitz and rhythm guitarist Frank Sidoris having, and more importantly knowing, their role.

Halfway through, Slash explodes with a guitar solo that by now only he can muster with such regularity before Kennedy once again assumes the mantle, his distinctive voice becoming better on each release.

The song seemingly slows to a crawl about two thirds of the way through before regathering pace – and then some – in what wouldn’t have been out of place on the debut Gunners album.

Time Will Tell starts with an eclectic drum intro that stutters haphazardly before three strikes of the cowbell introduce Kennedy, who seems to be singing within himself on this track.

Rather than belting it out, he almost soothes in his vocal delivery, allowing more breathing space between the chaos continuing around him. This song is really a showcase for Fitz to show off his chops, with the sporadic, yet flawless drumming continuing throughout.

Slash lets him have it until just after the two-minute mark before he can no longer restrain himself and out comes what promises to be one of many blistering solos.

It is a gentle number that mentions love a lot and sweeps along as though it is an ode to someone either long forgotten or recently departed. Despite a couple of guitar solo’s that rescue the song from the depths of despair it’s not really for me so let’s move quietly on…

The Path Less Followed counts in courtesy of Kerns’ drumsticks and is a whirlwind of distortion that soon clears into an almost boppy number that allows Kennedy to let out some of his trademark wails while Slash quietly nimbles in the background.

Kennedy’s voice, while always being impressive, benefits greatly from the confidence mentioned earlier and has come a long way from the early days where he appeared to be Slash’s sidekick.

He is now a musical enigma in his own right, and deservedly so.

Actions Speak Louder Than Words is already my favourite by virtue of the title alone, and as it kicks in with wailing guitars it justifies my early feelings.

It is a straight-up rock number that wouldn’t be out of place on a 1950s rock and roll dancefloor or a 2020s pub beer garden.

And that epitomizes the whole of 4 thus far.

Especially Slash, it seems, who comes in with another timeless guitar solo that almost speaks as loudly as the words.

Spirit Love begins with an almost Egyptian sounding guitar riff that evokes Middle Eastern feelings and almost has me conjuring visions of a cobra dancing upwards from his wooden coffin.

It quickly chuggs its way back into the tried and true rock formula, which, let’s face it, is exactly what you want from this record.

So far, my only gripe is a little too much of the same old, same old. The pace doesn’t pick up quite enough from song to song compared to what it could, but, again, is that really what you want or expect from a Slash Featuring Myles Kennedy and The Conspirators album?

The musical hieroglyphics return mid-song and again that cobra starts winding its way upwards in time with the music, all the while Slash keeping it mesmerized with guitar play that shifts its focus from me.

Whew, that was exhausting. I feel like I have taken a bit of peyote before listening to this album, so let’s quickly move on before it wears off!

Fill My World brings more of the same before April Fools delivers what I was talking about earlier. That kick in the guts, hard rock guitar riff that forces Kennedy to get his rock on.

The tempo shift on this track almost consumes the whole album and provides the freshness that had been strangely lacking to this point.

Don’t get me wrong, this is another fine album from Slash Featuring Myles Kennedy and The Conspirators, but at times feels a little too safe.

Call Of The Dogs feeds back into life and here is the winner by far.

Slash attacks the guitar as though it stole his lunch money, and you can almost sense Kennedy bouncing around the studio in anticipation of what’s to come.

It is a hard rocking tune that features enough of everything you love about music and a lack of everything you don’t, that promises to stick in your senses long after the final track of the album, which, admittedly, I am yet to hear.

This is the stand-out track by far, so far.

A nice little touch enters the fray in the back end of the track, Slash easing up on the guitar enough for a cool bass run to break through, highlighting the musical talent at the band’s disposal.

Fall Back To Earth promises more of the same before pulling back into more of a sweeping anthem that has all of the venom of a toothless rattlesnake.

It does beautifully accentuate the vocal brilliance of Kennedy, but I’m going to cut it short here so that Call Of The Dogs finishes things off for me.

While falling short of brilliance, 4 is a damn fine album from a band and musicians at the peak of their game, and who can begrudge them for getting a little softer in their later years?