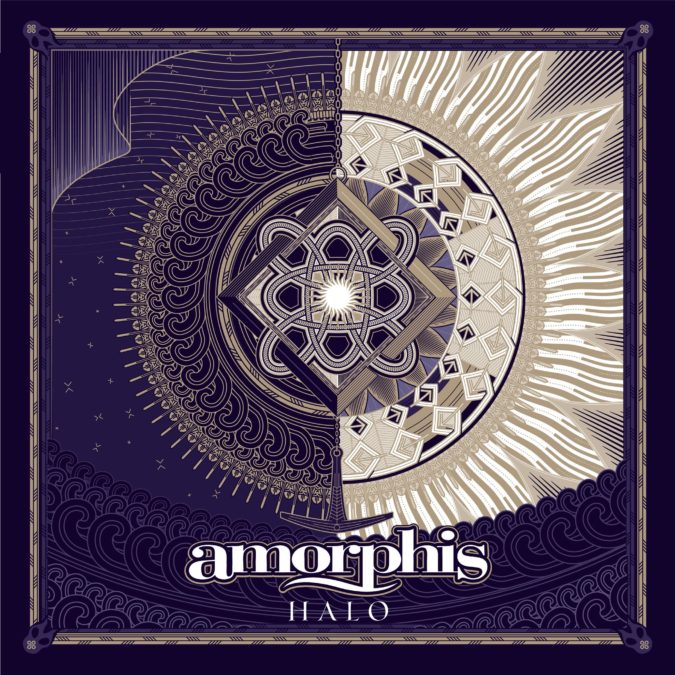 30 years is a hell of a long time to rock out, considering some rockers only just make it to the ripe old age of 27. Finnish rockers Amorphis however have managed to carve their own niche and settle into it for that staggering amount of time. With 13 releases already under their belts and their 14 th release Halo having just been released, I thought I’d finally give them a listen, and the pleasure of my thoughts.

Northwards is where the band leads us from the album get go with a haunting piano intro that’s back with some spooky synths. The band quickly takes over with some rocking, heavy, melodic tunes. As the dooming vocals chime in, the band pulls back to a bouncier groove before rocking out again into an extended pre-chorus/bridge section. A melodic interlude takes over midway through the song, and we hear a mix of guitar and keyboard solos. The many twists and turns in this song are hopefully a promising taste of what’s to come.

The follow-up track On The Dark Waters immediately kicks in with a heavy melody groove. The verses open up to a steady bounce, which then makes way for a melodic section of clean vocals. Tasty melodic guitar leads sprinkle a touch of extra flavour throughout the track. It’s a very progressive sound, but not so progressive that you lose interest amongst the wankery.

More piano and synth take us to The Moon, and here we find more melodic heaviness followed by a very tasty rolling bass line. The music is almost too pretty for the growling guttural vocals, but only until some massive melodic vocals pull it all back together. Another interesting interlude breaks the song structure, and I’m pretty sure I just heard a saxophone, or at least a synth pretending to be a saxophone.

Windmane also has a synth intro, but this time its lead by a short guitar melody. It’s a bit of a slow burner, but then it’s not. Those guttural vocals just pull it straight back to heavy melodic filth. Tasty, very tasty, and made even tastier by a killer guitar solo mid-song.

Finally, the next track, A New Land just rocks straight in. And it continues to rock through those guttural vocals and another massive melodic chorus. It repeats itself a couple of times, but changes just enough each time to keep it interesting. Probably the most continuously rocking song so far, and simple enough to keep this simpleton’s attention. Especially with those strange acoustic sections which sound like a sitar or mandolin or some other stringed instrument that I’m unfamiliar with.

Single picked notes, heavy chugs and thumping drums slowly introduce us to When The Gods Came. And when they got here, they took off on a melodic adventure and then into a heavily bouncing verse. The choruses again pull back into more melodic vocals, while the band keeps things heavy enough to secure them a spot in this magazine.

Seven Roads Come Together, that’s one big fuck off intersection, and it’s also conveniently the title of track number seven. Heavy, groovy and melodic again explains this one. The bands got a formula that works, and they do it song after song. And even though the formula is becoming a little predictable, it works so well, and they perform it with pure intensity and integrity.

War, what is it good for? Absolutely fucking nothing! This song however ain’t too fuckin shabby at all.

Thundering drums and simplistic guitar melodies drive the basis of the track, while heavy guitar chugs drop in here and there to add some extra chunk. Add melodic choruses, followed by some gospel chants throughout a guitar driven bridge and the song’s done, but not before returning to cycle through another verse and chorus. Big track!

We are introduced to the title track Halo by some synth and programmed drums before the song takes off on another heavy, rocking, melodic journey. Oh, this is interesting, the first verse opens with melodic clean vocals rather than the predominately heard guttural vocal verses of the earlier tracks. In fact, we don’t hear them at all in this track bar one scream to end the song’s siren laden interlude, and another quick blast to end the track.

The Wolf quickly see the return of the heavy guttural vocals, and the track takes off heavier than its predecessors. That is, until it hits another melodic chorus. Fuck me, it rocks, though. Probably the heaviest track so far. This band does love a good interlude though, and the guitars once again take us on a melodic journey, a journey which ends with some gospel chants and a heavy as fuck outro!

Alright, last track, here we go! Oh no, is it the dreaded ballad to end the album. It sure does sound that way so far with its acoustic guitars and strings. The siren we heard in Halo returns to open the vocal delivery for the track, and is then joined by vocalist Tomi Joutsen.

And yes, it is the dreaded album closing ballad. It’s not a bad one though, in fact, it’s pretty good.

Well now, for a guy that generally doesn’t enjoy an overload of prog, this progressive, melodic, and quintessentially melancholic metal album wasn’t all that bad. The band seems to have found a very happy medium between progressive and “pop” style structures where it’s unusual enough to not get bored with, but simply structured enough to build repetitive familiarity and groove.

There is something in this album for everyone, no matter which sub-sub-genre you are hanging out in these days. Even those elitist European metal worshipping metalheads will get it.