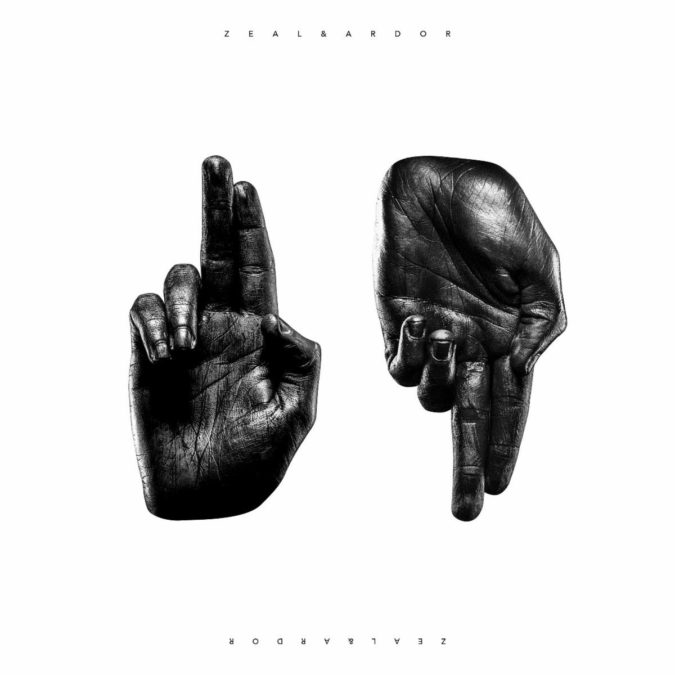 I must admit to not having heard even the start of any songs from Zeal & Ardor going into this, but after chatting with frontman Manuel Gagneux recently, I knew I would enjoy it.

The man is that enigmatic.

The opening, self-titled track starts with a wall of sonic intimidation that repeats itself steadily before adding other musical elements to the mix, almost seeming like a bad acid trip gone right.

It’s like something from a science fiction soundtrack, a steady, building pace promising something sinister before the climax, but instead we get the repetitive yet soothing vocal tones of Gagneux in a song that doesn’t really go anywhere but is even better for it.

From the outset this track tells you that it’s anything goes on this, the band’s third album, and by the time a hoarsely whispered chant introduces run you almost feel like you are doing just that except transfixed to the spot.

Sporadic shouts and almost subliminal chanting give Run the intensity of a Charles Manson workshop, a contorted mass of sonic blasts thundering, then subsiding, but all the while maintaining that steady, hypnotic pace.

Zeal & Ardor’s music is as much about feel and emotion as it is the actual music, and at this stage I’m not sure if I should be terrified or run towards the underlying chaos that is simmering below the surface.

Death To The Holy is the first “real” song on the album and rolls to life on the back of a consistent drum pattern that is soon turned every which way but loose, and once again Gagneux takes centre stage. The man is obviously not in what people would judge as a normal mindset while making this music. It’s just not humanly possible.

I’m not sure whether I feel violated or liberated but I can’t help but be swept up in the grandeur and scope that is one mans musical vision.

At times, you feel like you are stuck in a pinball arcade on the set of Stranger Things, and others on the other side of the mysterious chasm that threatens to devour that very same town.

Yeah, I know it sounds weird but listen yourself and tell me I’m wrong.

What has Emersion got in store for us, then?

Another curve ball, except this time in another direction.

Fractured sounds break the silence before being swallowed by what sounds like something from an Android app before all hell breaks loose and the inner monster is once more let out to play.

Zeal & Ardor started life as a solo project for Gagneux, and you can see why.

Who the fuck could keep up with this?

Seriously, this is like the background music you hear at Retravision while a dozen television screens dance in the background, their flashing lights trying to lure you into their spell.

There really is no meaning to this track, but, again, I fucken love it.

The serenity is punctuated time and time again by pulsating madness, and I think I need a drink before moving onto the next song.

Golden Liar comes in to the sounds of whistling before a spoken word intro pulls back the curtain to reveal a country style blues number that is piggybacked by a thunderous kick drum that could launch 1000 ships into battle.

It is a predominantly vocal driven track that shows Gagneux can actually sing, and sing quite well.

The song gradually picks up momentum towards the back end but doesn’t quite break through to the perceived chaos, instead retreating into itself as it draws to an end.

Beautifully picked acoustic guitar tones announce Erase, but Gagneux is having none of that as he overpowers the tranquillity with a vocal tirade that woke the kids up in the next room.

There is so much going on with each song here that I know it is going to take multiple listens to do it justice, so forgive me if I miss anything writing this on first listen.

Synth sounds break the onslaught, while still bubbling with maelevolent uncertainty, before Gagneux again changes tact and brings in a cool rock swagger just to fuck my senses up some more.

Bow scratches its way to being, a slow hand clap in the background that gives the impression this will be another blues rock number. It is smooth, cool, and catchy as head lice, the soothing hums appearing in set junctures to remind you that this could turn out to be a punk rock number.

It isn’t, and manages to be the closest thing yet on the album to resembling a conventional song.

Feed The Machine has that Motown feel to begin before Gagneux  lets loose his inner psycho to flip things spinning out of (but still into) control. He screams, sings, noodles, preaches all straight off the back of each other and if this man hasn’t sought professional help since recording this album then he has obviously expelled all of his inner demons while making it.

I Caught You begins with a nice guitar riff, building on itself while Gagneux  half speaks, half sings his way into an echoing cavern that bounces his voice in all directions. It seems like he is debating something with himself before deciding screaming is the best way to win an argument. That doesn’t stop him trying all of the above again first, just for certainty, and if you had time to split this song into several, then you would have another four or five songs to get through on the album.

The song splinters again halfway through and almost becomes an internal war before Gagneux puts his general’s cap back on and leads the troops back into the abyss. There’s almost Korn style Nu Metal guitar twangs there before Gagneux says fuck that and throws yet another metaphorical spanner into the works.

I have heard the next track, Church Burns, before and absolutely love it.

It’s a blues tinged gospel style number that is as beautiful as it is eccentric.

It almost has an underlying sense of doom and destruction that is tempered by the blues strained vocals that bring the song back to Earth momentarily before sending it plunging back into the wasteland amid a blockade of instruments and experimental notes that give the song an almost other worldly sense of belonging.

Best track of an outstanding collection so far, and not just because it seems to be anti religion.

Götterdämmerung coughs and splutters to life before turning into an almost rap/metal tune that doesn’t seem to know which way it wants to flow itself.

Gagneux barks and spits and elevates what could easily be passed off as a so-so experimental song into a furnace of molten lava that is the most left field song on the album.

And that’s saying something.

Hold Your Head Low enters the fray courtesy of a chilling bass run that swaggers into being, a sense of swirling smoke and fog as Gagneux  peers through the darkness at an unseen adversity.

Rather than attempt to suppress the enemy by attack, Gagneux  instead plays it coy, gathering momentum before easing off and on and off and on again.

Or was that off?

I’m not sure, but I’ve honestly never been so happy to be clueless in all my life.

J-M-B bounces out with guitars that soon give way to an almost pop like number that quickly decides it doesn’t want to be, and once more the beast lives.

What’s with the letters?

A-H-I-L lurches from the shadows, a fuzzy synth sound battling with keys in a Sabbath style tug of war that is definitely not what I was expecting from the final track on the album.

It’s a psychedelic, entrancing and peaceful slab of music that must be there to calm you down before digesting the events of the previous 13 pieces of brilliance.

And then, as quickly as it emerged from the depths, the song wades meekly back to its final resting place, strangely leaving you feeling a bit hollow after what has transpired before it.

I’m still not sure what I just listened to but one thing I am sure of is it was something special.

Definitely not my first, second or even third choice of listen two days ago, but it will definitely be getting quite a few more spins before the weekend is out.