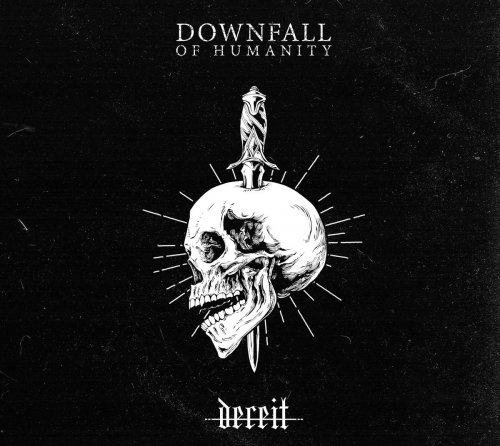 Unfortunately, due to time constraints, we here at HEAVY are sometimes a little slow on the uptake when it comes to reviewing new music from bands.

Such is the case with the latest EP Deceit from New Zealand metal outfit Downfall Of Humanity, which came out last October.

Starting with the title track amid a sea of gently cascading acoustic interludes, Deceit soon swarms to life with electric guitars overpowering their gentler cousin and breathing fire into proceedings.

Vocalist Daniel Carleton eases into things with some cleans before exploding soon after, dripping intent and spitting venom over the top of the more accessible clean vocals.

The guitars of Alex Carleton and Bryce Patten continue to swirl in the background, gaining prominence throughout, with the dual vocal delivery seemingly giving both sides of the story.

This was the single release from the EP and it’s easy to see why.

It has everything you want from a song, hooks, melodies, ferocity, solo’s and depth and is the perfect introduction to this four track EP.

Litany Of Hate bursts from the stereo courtesy of more guitar play before easing off momentarily, just long enough for Carleton to expel his lungs and lurch into a wave of aggression that lingers long after the cleans kick in.

Isaac Drakeley of Pale Flag is also involved on this track, and word is Pale Flag are another metal beast altogether when it comes to harsh vocals, so I’m not sure where Carleton stops and Drakeley begins, but I do know I like it.

The twin barking assault adds another layer to the song and is unrelenting in its anger.

It’s actually refreshing to hear two different vocalists go at each other in a growl off rather than having the yin and yang of music attempt to pacify the restless and proves Downfall Of Humanity don’t mind venturing into unchartered territory which is a major plus.

One More Lie falls from the band’s lips, awash with guitar, before a wicked drum roll ignites proceedings and the light and shade vocal barrage begins again.

It’s actually refreshing to be able to understand at least half of the lyrics on a release like this and allows you to get a better understanding of where the song is going – not that I have any clue – but I think the harsh side of nature has emerged triumphant once more in battle.

This track is perhaps the most engaging so far, almost epic in scale with enough tempo changes and technical proficiency to highlight the musical aptitude within the band.

They love their solo’s and hooks without ever succumbing to the temptation of overdoing or relying on them, if that makes sense.

I think it does..

As we get to the final track, Voices, I find myself bemoaning the fact there are only four tracks on offer here. It feels as though I am just starting to be drawn into the world of Downfall Of Humanity, and a longer serving would definitely not go astray.

A nice little bass run introduces Voices before the guitars take over, almost duelling one another but still complementing each other.

This is a more measured track to begin with, following a more refined sonic structure with double kicks thrown into the mix for excellent effect.

Voices is almost a song within itself. The heavier parts as weighty as fuck, but the calmer moments also have their place. There is an intensity to the song that is magnified by the differing vocal viewpoints, and I get the feeling this angle is something the band will (successfully) explore more in the future.

Just over half way through things really get interesting, as the instruments pull back in an almost dreamy ambience before the guitar leads Downfall Of Humanity back down the rabbit hole and the assortment of madness begins once more.

Now I’m actually a little pissed off at the band because they have started to make my head bang in subconscious timing to the rhythmic pulse but are set to leave me hanging at the altar, hair everywhere and ready for more.

Overall, an awesome entre to what will hopefully be a main serving sometime later this year, but there is definitely enough substance to force me to make a mental note to be check out whatever comes next much more quickly than I afforded Deceit.