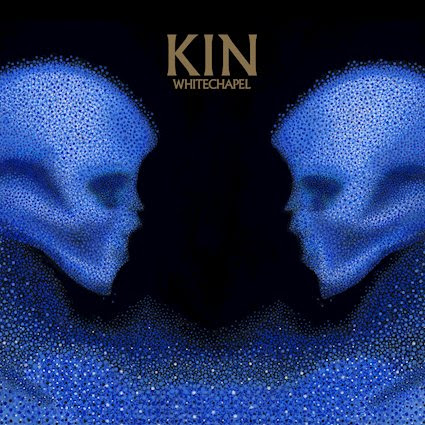 Whitechapel’s latest album Kin has thrown me from the outset.

As I settled back into my comy armchair awaiting the sonic onslaught of metal, things changed pretty quickly when the sweet sounds of acoustic guitar filled the speakers and meandered along smoothly for a good thirty seconds or so.

If I had the CD cover I would have been triple checking I played the right one, but luckily modern technology saved me the embarrassment and before long the familiar aggressive vocals of Phil Bozeman rip through the comfort and hurl you into the cavalcade of mayhem initially expected.

After the massive success of 2019 album The Valley, some were questioning how and if Whitechapel could even match, let alone surpass the musical majesty on the follow-up.

One glaring thing that caught my attention in the press release was the statement, “for the first time, it could be said that a Whitechapel record is as much a rock album as it is a metal one”.

Could it be that the mightly Whitechapel have succumbed to the light side and further closed the chasm between rock and metal in their music?

The start of I Will Find You certainly suggests that, but the explosion of heaviness that follows soon allays any fears the band have gone too far.

This is a perfect opening track, cascading and violently lurching through shades of impending doom and seductive beauty in equal parts, the transition from harsh vocals to clean seamless and precise.

It almost feels as though I have heard three songs in one and I dig it.

Lost Boy begins at a rapid pace, unrelenting and unforgiving, the ferocity of the musicianship matched step for step with the vocal prowess of Bozeman who owns each breath and conducts proceedings like a demented showman.

The contrasts musically already are a treat to behold and did I mention the guitar?

This fucker can shred!

A Bloodsoaked Symphony crawls into life, the heavy bottom end sound almost rumbling its resentment before the vocals kick in and once again I find myself both intimidated and enthralled at Bozeman’s delivery.

His voice is almost an instrument of its own and has a menacing quality that commands respect.

Drummer Alex Rüdinger comes to the fore on this track, settling into his permanent role in Whitechapel as if he belonged there.

Timing changes, tempo changes, and subtle nuances abound in each track, and for once I actually understand why some people compare their listening experience to a journey.

Anticure kicks in with a dreamy guitar tone and rolls along without really going anywhere, providing the first minor crack in what was previously an impenetrable armour.

Not that it is a bad track, and in a way you have to admire the fact Whitechapel are still changing things up, but at this time of the morning I need a little more starch in my weetbix.

The Ones That Made Us stutters into life, eclectic drum patterns and timing re-uniting before Bozeman rediscovers his edge and sets about once more on a personal crusade.

So far this track is the standout for me. Raw, unforgiving and demented, its venomous intent almost forcing its way down your throat.

History Is Silent brings out the acoustic guitar once more, with hauntingly beautiful vocals easing the pressure on my neck and ushering me into a world that has more musical beauty and catchy hooks that most radio hits out there.

You can almost feel Bozeman working himself into a rage before exploding without hijacking the song.

He quickly reverts to cleans and the contrast makes it easy to assume there are two separate vocalists on show here.

To The Wolves doesn’t fuck around, getting straight to the point, a tidal wave of aggression pummelling your ear drums almost before you can mutter “fuck me”.

Making this album even better is I haven’t understood one word of the harsh vocals and I still love it!

Guitarist Ben Savage cuts loose with a blistering solo about halfway through before the music almost restrains itself, pulling back in a swirling haze before driving back with even more sludge heavy bottom end. Savage again takes centre stage before giving way to the soft constraints of Orphan and another foray into the softer side of Bozeman’s soul.

Despite being flawlessly delivered, Orphan fails to reach the (admittedly high) standards of most of the rest of the album but seems to be one of those tracks that is there to add to the overall feel.

Without You takes its first breath via a beautifully crafted, almost flamenco style guitar setting that stands out like the proverbial dogs balls initially before switching tact and threatening violence before retreating to calmer pastures that seem to be in a constant battle with the dark forces that seek to devour the beauty.

This is a well structured song that perhaps best shows the musical disparity on display across the ten songs on offer.

I’m actually a little confused here because Without You and Without Us appear directly after each other, but whether it’s you, me, us or them, this track is a cracker!

Quite fittingly, the title track closes out Kin, another acoustic number that is given life through minimal use of instruments and maximum focus on vocals.

It’s funny that some slower songs shit the absolute fuck out of me but I find others appealing and beautiful.

What can I say? I’m a little messed up.

Just like Kin, except on this occasion messed up is better than straight up.

It is truly a unique exploration of sonic gravity and, quite possibly, a step even further into the musical landscape of which Whitechapel have been steadily gravitating towards.