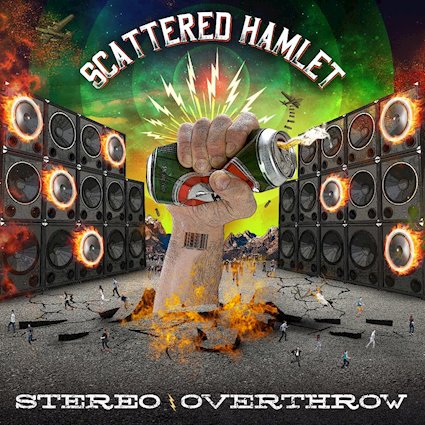 “The boys are back and are ready to go, hearing too much trash on the radio” blares out of the speakers, introducing the latest album, Stereo Overthrow, from Greene County hard rock machine Scattered Hamlet.

This one line epitomizes the feel and vibe of Stereo Overthrow, a far more rockier release than 2016’s Swamp Rebel Machine, but one which seems to capture beautifully the playful nature and exquisite musicianship of this Southern rock quartet.

The albums opening track is the title track, and is a powder keg of volatile guitars, fat riffs and infectious grooves that exudes confidence and an air of nonchalance that allows the music to breathe a life of its own without constraint.

Next up is the bands latest single, All Talk, which is a more traditionally structured dirty rock number that should quickly become the anthem for all self-respecting outlaws out there.

Locked And Loaded is a different sounding track again – albeit one with the devils rock rooted deeply in its core.

Scattered Hamlet aren’t rewriting any musical books here, but you get the impression that is the last thing on their mind. What they are writing is catchy as fuck rock music that pokes fun at itself while simultaneously flying in the face of anyone who dares even think that rock is dead or dying.

This is party music to wake the dead and that infectious I am already singing (out of tune mind you) along to the chorus.

Slide guitar brings Lowdown to life before the drums enter the fray and the groove kicks in.

There is something strangely comforting and familiar about Scattered Hamlet despite the fact their music is new to these ears, but in what is becoming an increasingly saturated market sometimes – as in this case – familiar is good.

I’m normally not a fan of the harmonica – especially when a drunken backpacker is playing from the crowd thinking they have even a smidge of talent – but when it’s done right the harp can turn a good song into a cracker as is the case with Lowdown. It’s almost a running battle between guitar and harmonica, and on this occasion, I would say the honors went to the latter.

Don’t Tread On Me showcases the swampy, blues influences evident on Swamp Rebel Machine, but only briefly before the rock machine takes over, and you have yet another rollicking tune made up of all of the ingredients that go into a bowl of hard rock soup.

Scattered Hamlet boast an impressive average of over 100 live shows each year and you can hear every one of those gigs shine through in the musical interplay between each member, none ever overshadowing or competing against the other, instead complimenting each other in a pulsating sonic display that gets better with each listen.

We’re half way through Stereo Overthrow and already this album is definitely in my top 10 for the year.

Death Or Dishonor does nothing to change that with a swirling mash of guitars offering up the harder edged, guitar driven side of Scattered Hamlet.

I’m not sure whether to bang my head or tap my foot – because, trust me, I am unable to co-ordinate both at the same time – so I elect to try an alternating combination of the two which gives the music a slightly edgier feel. Go figure…

While undeniably straight out hard rock, Scattered Hamlet also throw in ample lashings of blues, rock and metal to create a sound that suits their attitude and approach to music.

Might even be them alligators they breed down South… Fuck knows but whatever it is I want a full subscription.

Low Class Blues delivers high-class tunes, as a sweeping guitar solo leads into a slower paced song that rocks at a steady pace yet still manages to nail the mark, with a subtler, but still impactful, use of the harmonica accentuating the blues side of the bands musical psyche.

Rattlesnake hisses to life amid a mass of feedback and reverb, before Joad leads the charge into yet another wall of guitar that gives way to a sunset strip inspired tale of rock excess that blames a helpless rattlesnake for whatever antics they are recalling.

A sizzling guitar solo dominates the last act of the song before reverting to its almost hypnotic vocal hook that promises to be stuck in your skull until at least the second bottle of Jack Daniels.

Two tracks to go and the dreaded ballad is yet to rear its ugly head, and for once I am confident that for a change Scattered Hamlet are a band that stays true to their first love of rock.

The Creek Don’t Rise doesn’t disappoint, keeping the pace rolling into album closer See You In Hell, which couldn’t possibly be a slow burner.

Soft guitars sit just under an almost spoken word intro from Joad who seems content to dictate proceedings from his vocal view point.

Although I am unsure of the exact nature of this song, it sounds as though it has a deeper meaning to someone in the band, and actually reminds me of a brotherhood call to arms.

The guitar work that comes in half way through has as much feeling as the angst in Joad’s voice and although this could technically be classed as a ballad it somehow feels like more.

I can’t believe I am saying this, but it is actually a fitting finale to Stereo Overthrow, and possibly a small hint as to the next musical journey Scattered Hamlet might find themselves on.