WHISKEY MYERS and THE IMBECILES at Electric Ballroom, London, UK on 21/05/19 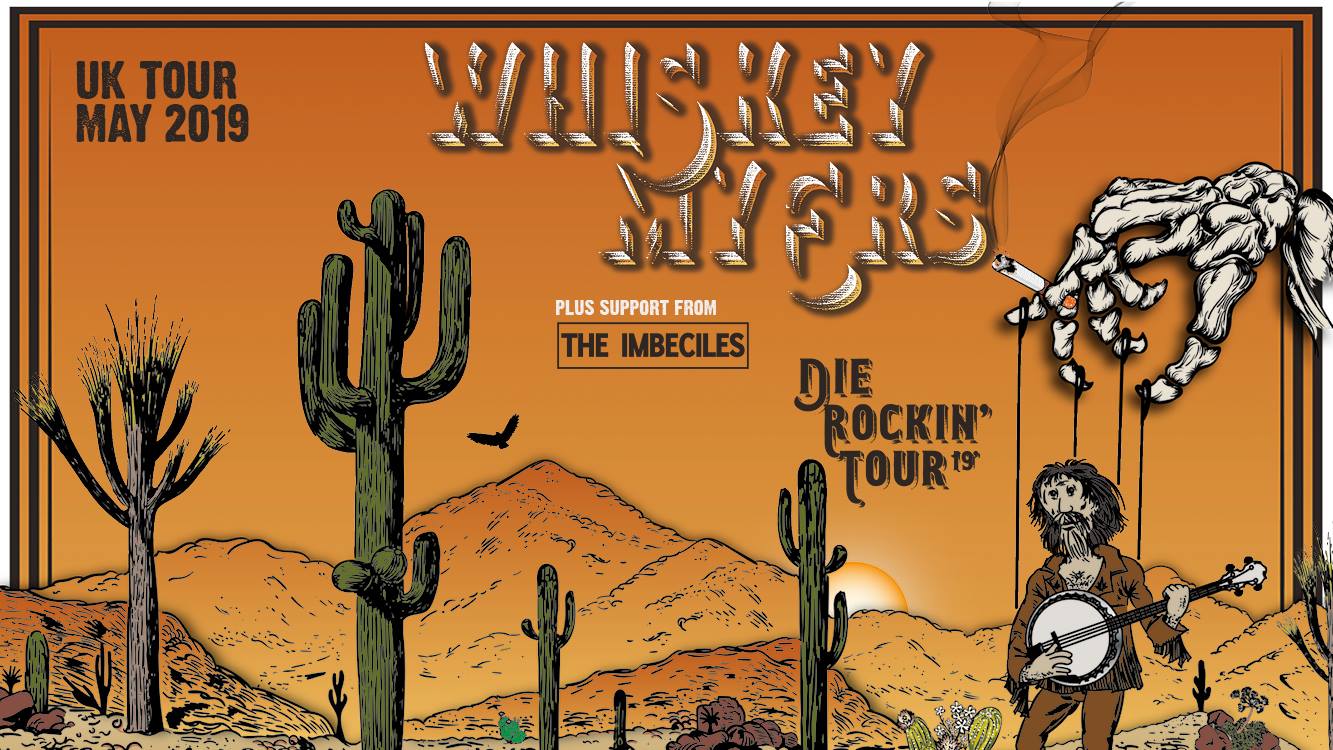 Following a jarringly paradoxical support act in the form of post-punk experimental outfit The Imbeciles, the assemblage of trucker caps and 10-gallon headgear were conspicuously ruffled and restless for the sweet southernality of Texas natives Whiskey Myers. Having left the UK barren of a headline tour for two years, the Electric Ballroom in Camden was the chosen venue to burst open the dam of fan anticipation on Whiskey Myers’ UK run of their Die Rockin’ tour.

All was in order prior to their set: a mystical, swampy forest backdrop hinted at the southern rock flavours to come; Whiskey Myers’ band mascot Carl, a cheekily grinning, stuffed orangutan with eyes as wide as saucers (presumably a consequence of the scenes he witnesses on tour) was leisurely spread-eagled on an amp; a dutiful infantry of guitars stood to attention by the stage, awaiting their associated human companions to swing ’em low with relish.

Sauntering on stage with all the confidence of lions approaching a congregation of mice, the rugged Whiskey Myers opened with the familiar snarling rumble of “Frogman” from their last album Mud (2016). Thereafter slinking through the infectious, simmering grooves of numbers such as “Deep Down In The South” and Brent Cobb’s “Bar, Guitar and a Honky Tonk Crowd”, Whiskey Myers demonstrated their aptitude in rhythm as if they were at one with the pulse of our earth’s scorching core. Tony Kent, one of the few humans who can incite frenzies from simple percussive instruments such as the tambourine, battered three tambourines at once in a gluttonous grab for decibels, each one spruced in a colour of the Texan flag, whilst Jeff Hogg worked behind his drum kit with humble ambition.

Whiskey Myers’ gift for rhythm is mostly where their charm lies, their irresistible swing forever grabbing hold of spectators like a kid about to shakedown their piggy bank for pennies, yet they also hold strong command in climbing incendiary southern rock summits. Often boasting a Lynyrd Skynyrd-thick tapestry of guitar thanks to axe-wielders John Jeffers, Cody Tate and frontman Cody Cannon, Whiskey Myers’ live sound exudes a tender magic that clings to the atmosphere like fireflies to forest dew, eventually culminating in a burst of flaming voltage, as in the tantalisingly sultry “Different Mold” and “Early Morning Shakes”. The latter treated attendees to an extended mid-section jam, which played out like an enticingly mesmerising soundtrack to an epic desert pilgrimage, peaking with a heated guitar duel between Jeffers and Tate.

Whilst Whiskey Myers demonstrated their virtuosity in climactic musical foreplay, they could also manifest a fragility as gentle as dandelion seeds caressing the course of a summer’s breeze. Tracks such as “Virginia” and “Broken Window Serenade”, the latter of which was drenched in lights of exquisite sunset hues, employed warm, earthy acoustic guitar that uplifted the crisp vocals of Cannon’s sentimental narrations. The delicate yet sombre piano riff of “Stone” encased a knowing twinkle of hard-learned lessons, the authenticity of the potent emotion proving hard to swallow down without a slight whimper in mourning of our own heartaches.

The set was also a playground for new, unreleased tracks to be aired: “Gasoline” swung with a strutting riff (think Rickey Medlocke’s wah pedal swagger embedded in Skynyrd’s Last Of A Dyin’ Breed) whilst the rampant countrified stampede of “Bitch” was led by Jeffers on vocals, the audacious refrain “you’re still just a bitch in my book” dripping with attitude. Followed by the peacocking “How Far”, in which Jeffers played his guitar with punishing grit, Whiskey Myers affirmed their ability in coaxing volcanic rhythmic eruptions of hypnotic pull.

Finishing their near-two hour set with the fierce chug of Neil Young’s “Rockin’ In The Free World”, which was punctuated with a vigorous bucking bronco cowbell display from Kent, Whiskey Myers were able to leave the stage safe in the knowledge that they’d satiated their fans.