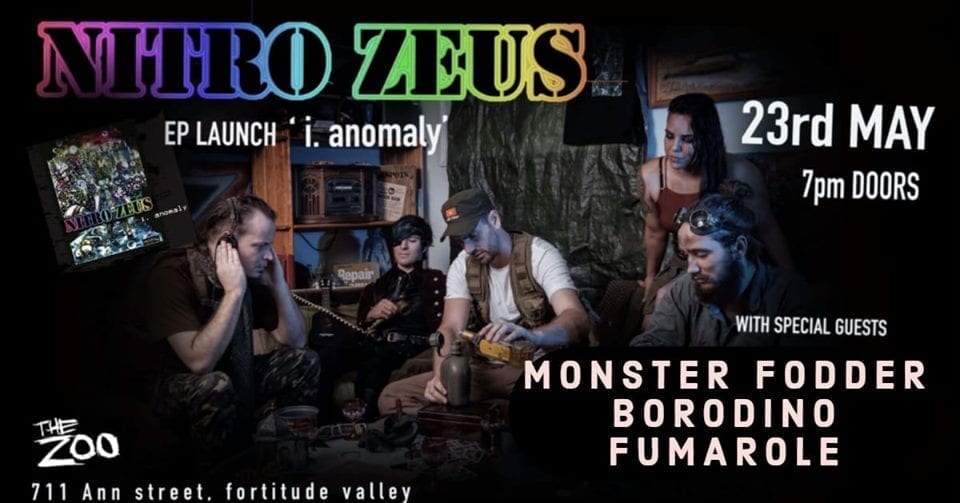 Normally when reviewing a local show I make sure I arrive in time to see every band perform, having missed too many quality acts in the past due to unnecessary tardiness.

Despite doing my best tonight, I unfortunately missed opening act Borodino due to having an already scheduled interview at the same time as thier set so deepest apologies to the band.

Borodino were one of four bands on the bill, with themselves, Fumarole and Monster Fodder joining Nitro Zeus as they had the official launch for new E.P i.anomaly.

Fumarole were just hitting the stage as I got back inside and they set about making their intentions clear from opener ‘Feeding Hand’. Their brand of stoner metal was at times reminiscent of the sounds of the Woodstock era, with a full and rounded sound from the Brisbane three piece filling every corner of the room.
Fumarole are a unique band in that they seem to place equal emphasis on instrumental interludes in their music as they do vocals. Their songs are predominantly guitar driven pieces with subtle timing and tempo changes that are used to great effect.

At times they looked as though they were jamming in the privacy of their home studio rather than placed in front of an audience, but it was this laid back approach to their music that managed to enhance their stage sound and persona and by closers ‘Timelord’ and ‘Ghost Smoke’ the band left the crowd highly satisfied yet still wanting more. Definitely a band to keep an ear on.

Gold Coast anarchists Monster Fodder wasted little time launching into their set, with frontman Stuart making a simple yet impactful opening declaration of “we are Monster Fodder and we’re gonna blow your bloody ears off!”.
And that they did, opening with ‘Nowhere When You Die’ before plunging into their customary cover of Motorhead‘s ‘Ace of Spades’. It is unusual for an original band to play a cover so early in the set but you could almost sense that Monster Fodder threw it in more as a statement than a random cover.

The musical comparisons – all the way down to having a bass playing vocalist – to Motorhead are unavoidable, with Monster Fodder openly paying homage to Motorhead as a strong influence, but that’s where the comparisons end.

While retaining elements of the sound made famous by the late, great Lemmy Kilmister, Monster Fodder have moulded their sound into an entirely different beast, encapsulating the rawness of hard rock and the carefree punk rock ethos perfectly to produce an infectious party vibe that almost dares you to stay away from the dancefloor.

They would have to be one of the hardest working and touring local bands in the Queensland circuit and this attitude has rubbed off on their performance with a selection of songs from debut E.P Skeletons forming the nucleus of their set.

As all good bands do, Monster Fodder started strong and finished stronger, with the final trio of ‘Fire Fire’, ‘Evil Eyes’ and single ‘Brain Hammer’ leaving no doubt that Monster Fodder are well on their way to becoming a headline band.

Nitro Zeus celebrated the launch of their E.P in fitting fashion, playing the whole recording to open the set.
In a move I have never before seen during a live performance, the band said goodbye to outgoing vocalist Zichxyna during ‘LTES’, as incoming frontperson Jess joined her onstage for a staggering duo version of the song that was the perfect changing of the guard.

Zichxyna played her final gig with the band and while the transition was an emotional moment of the set, it was also a beautifully poignant moment of respect and acceptance that is rarely seen in the public arena.
Jess stepped effortlessly into her new role, finishing off the E.P vocally before putting her stamp on older songs ‘Fractures’ and ‘Curbstomp’ as though they were her own tunes.

Her vocal range and delivery is similar to that of Zichxyna but with added layers that only youthful exhuberance coupled with confidence can bring.

James V on guitar was the cornerstone of each musical thrust but Nitro Zeus are one of those bands that benefits greatly from the sum of all its parts rather than the contributions of individual members.

Set closer ‘Dead & Circuses’ gave Jess the opportunity to explore even further corners of her musical spectrum, with her talents equally adept at both sweeter, more soulful harmonies and the harsher screaming elements.

As much as music was the winner tonight, so too was the essence of musicianship, and when those two things manage to align there is no better place to be than front of stage.

PrevPrevious.WHISKEY MYERS and THE IMBECILES at Electric Ballroom, London, UK on 21/05/19
Next.SHE CRIES WOLF at The Factory Floor, Sydney on 25/05/2019Next