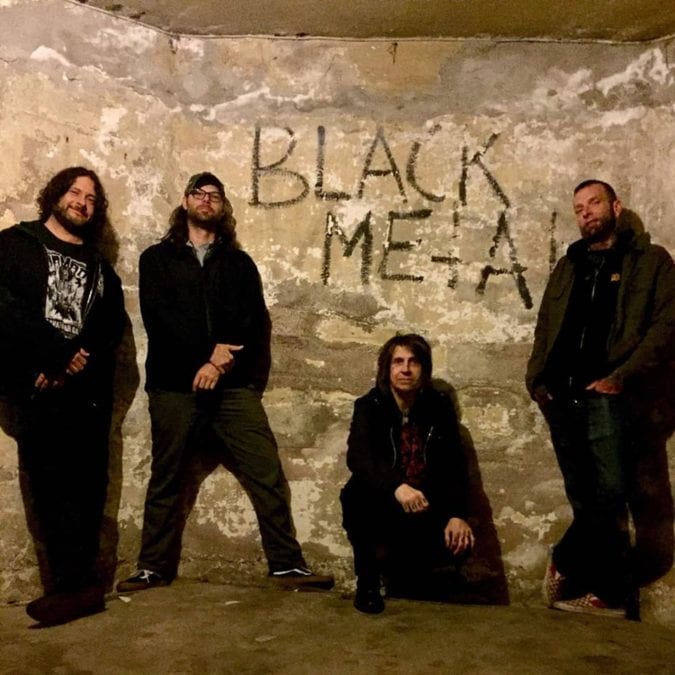 Godfathers of sludge Eyehategod return to Australia for a run of shows this month, with vocalist Mike Williams in a typically jovial mood when asked what we can expect from the band.

“As of lately we’ve changed our sound to more Grateful Dead worship”, he teased, “and we will most likely sit on beanbags and smoke from a communal pipe. One or more of us will probably transform into an iguana as well. Obviously we’ll be bringing our shambling New Orleans style trash vibe of rock-n-roll depression and hopeless hardcore feedback that has turned us into the lonesome nomads we are today. We are very excited to see our Aussie friends again, it has been way too long”.

Joining them for both the Australian and Japanese leg will be fellow sludge metallers Black Rheno, with Williams almost apologetic in not being familiar with their music.

“In all total honesty, I personally do not know anything about Black Rheno”, he said. “I know they are doing a few shows with us and I know I will check them out live and if time allows, give ‘em a search on YouTube.  Hopefully, they are good cats and we’ll get along nicely with them. We have been on tour basically since April 2017, we play with a hell of a lot of different bands, with different styles it’s a lot to discover but I’m all about checking out new original groups”.

Eyehategod are well known for being at odds with everything from the corrupt music industry to religion to police. While maintaining his right to expression and opinion, Williams stresses there is no overall politic agenda with the band.

“First of all Eyehategod are not a political band” he declared. “I speak entirely for myself about any issues or problems I find with society’s rules and laws. Corporate record labels fucking suck, period. DIY is the only way to go as far as honesty and the bands getting a fair shake. One thing I really hate is corporate record labels disguised as indie underground labels. We’ve been lured in under duress by “friends” who promised us the world with a handshake deal only to learn we’re treated as just another product to manipulate. Most of the other things are obvious, religions and police terror units are locked into place. It seems hopeless fighting money and power but at least people can change one by one and come over the side that opposes these forces. It sounds cliche but it all starts inside yourself. If you’re against Trump’s bullshit racist, sexist, homophobic agenda then say so…, make it known. Educate yourselves and speak out against these ignorant pieces of shit trying to take away people’s basic human rights. There’s too much to say here. It can’t all be summed up in one answer to one question, but I just wanna say Fuck Trump & everyone who supports him”.

While their music resonates far and wide and the repercussions reverberate through the industry, Williams vehemently denies any connection with music and violence.

“I’m not sure if music can be called a weapon”, he mused. “I want it to be but using it as a tool for protest is more like it. Music is definitely a propaganda machine and an amazing way to spread ideas. All art is. Most people who go to see bands or buy that certain bands album, already know what that bands views are all about. Maybe some people have their minds changed and opened up for the first time. Music as a weapon is a great romantic notion though, one that I won’t ever give up in my own mind. The MC5 wielding guitars as rifles is a wonderful statement but can you actually kill anyone with music..? Maybe. I enjoy wounding people. Hurting their feelings and destroying their eardrums with noise. Maybe change their way of thinking. Get out of the close-minded box that mass advertising force-feeds us”.

When pressed further on his stance towards such issues, Williams almost becomes indignant.

“What stance would that be”? he questioned. “I don’t know what “stance” I’m making. I write and play offensive rebellious music, is that my stance? It’s all very obvious to me, let people live their fucking lives. If they’re doing their thing, being themselves… Don’t fucking worry about what they are going. It’s not your business. Leave me the fuck alone too. Quit prying in my life. It’s quite pointless to say that though isn’t it? Facial recognition and tracking GPS is more widely used than ever. I just speak my mind and that is the best example to give”.

After their debut album In the Name of Suffering in 1990 that had a more hardcore feel to it, Eyehategod refined their sound more to what it has become along the lines of Southern rock, blues and doom. While the musical shift was noticeable to their growing legion of fans, Williams says that it was more a case of natural evolution than a preconceived idea.

“Our music evolution has been from the obvious reasons” he urged, “playing and writing better, developing OUR sound etc. Jimmy still only has four strings on his guitar! We recorded that first album for $800 and spent the other $200 on beer and weed. It came out in 1989 actually on Intellectual Convulsion records out of France – an independent label – and it took off from there. There were demos self-released before that. “Sludge” was a term we never heard before. We still don’t identify with that description, I mean it is what it is but it’s just another word, like “Grunge”. That term came after we started, so if that’s what people want to call us then that’s fine. I guess we consider ourselves hardcore punk & doomed out blues. I really don’t care for labels placed on us. It’s all ROCK & ROLL… It’s music to break glass, run from cops and FUCK to”.

EYEHATEGOD with Black Rheno performing at: