Unleashing The Demons With ENGRAVED 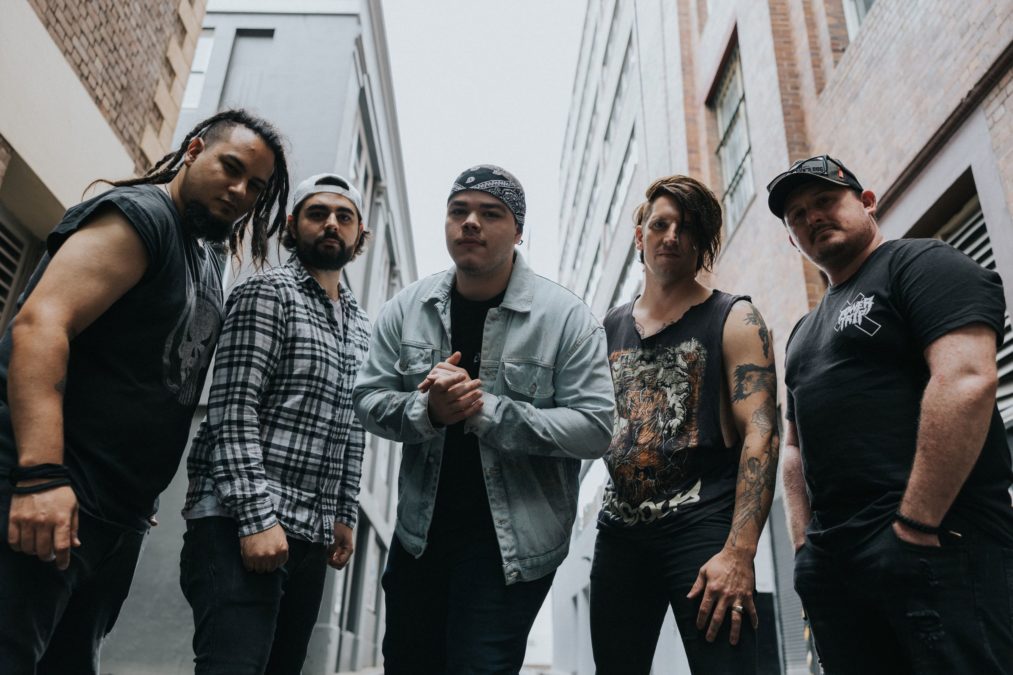 It’s hard to believe that just six months ago, Sydney metalcore band Engraved were standing side of stage at the Crowbar, feeding off the nervous energy that only a debut performance can ignite.

I remember speaking to them moments earlier, their excitement tempered only by their absolute terror of the unknown, months worth of practice and writing all leading to this one moment of time that would be witnessed by maybe 50 dedicated Sydney metalheads.

Needless to say, that show went off without a hitch – except for a dislocated shoulder mid set by Phil the bare chested bass player – and that moment where potential meets reality meets fear meets sheer, unbridled pleasure aligned with the precision only live music can provide and the birth of one of Australia’s next generation of metal warriors had officially begun.

Fast-forward to early 2022 and that same look of entering the unknown was etched across the faces of the band who were eagerly awaiting the day they would launch their debut EP Unleashed into the world.

Because of the dreaded C word that not even I shall mutter, that show six months ago would remain the sole appearance on any form of musical stage by the band, who instead bunkered down with the aim of carrying their new found momentum into a collection of songs that could emphatically announce Engraved’s arrival without so much as a volley fired in anger.

Perfectly timed to coincide with two shows helping to celebrate 10 years of HEAVY, Unleashed came out earlier this week to overwhelmingly positive reviews, putting the shirt back on Phil’s back and a reinvigorated fire back in the stomachs of a young band who promise so much despite their recent arrival on the scene.

Four of the five band members sat down with HEAVY earlier this week to talk about Unleashed.

“Our sound is because of the different influences that everyone had,” guitarist Anderson Duschek began. “For example, Daniel (Varvarian, guitar) and I had been listening to particular bands and Julio (Criscolo, vocals) has more of the metalcore background stuff. We just find a way that everyone can like and enjoy, but we don’t want to sound similar, or we don’t want to copy that. So we basically say, look, I have this riff, but it’s kind of a hard rock riff, how can we turn that into a metalcore song? That is what happened. We got the mix of everything, just like a fruit salad. You get a mix of everything and then chef it out. You combine different flavours to match one particular… I’m not gonna say it’s a particular thing because there’s lots of bands that do similar stuff, but I reckon we have this difference between today’s bands, and we can mix good melodic hard rock and metal in the same spot. I think we just found a spot that everyone liked and said let’s go for it! We feel very comfortable playing it and here we are.”

While the five tracks that make up Unleashed can all loosely be labelled in the metalcore side of metal, each also has enough musical disparity to hint at a broader picture that promises to evolve into a beast entirely of its own creation.

It is an ability seldom harnessed on early releases from any emerging bands, with the confidence and bravado required to create outside of the unseen musical boxes usually out of the comfort zone of a band still finding their own musical identity.

“It’s like what we mentioned before with different influences,” Daniel chimed in. “It’s stuff that draws us to want to play an instrument or pick up a guitar. Then you wanna throw it into something that you can call your own music. For example, at the start of Gold Lives it’s a very long intro with just guitars and a bit of a build up with the rest of the instruments. I have always been a massive fan of Trivium and bands like Metallica, and there’s a lot of just guitar noises in a lot of their songs, and it sounds great. Heavy, fast riffs, and it’s something different to the other songs that are on the EP. We really want to show that we can do different things and different styles with our music. Most EPs are essentially demos of what a band can produce with their sound, but we wanted to show that through different sounds and different influences that we can make different metalcore songs.”

In the full interview the band talk more about the songs on Unleashed, finding the balance between genres and making it work best for them, the contrasting vocal delivery provided by Criscolo and his growth as a frontman, making the band work with members living in separate states, their upcoming gigs as part of HEAVY’s 10th birthday shows, future plans and more.