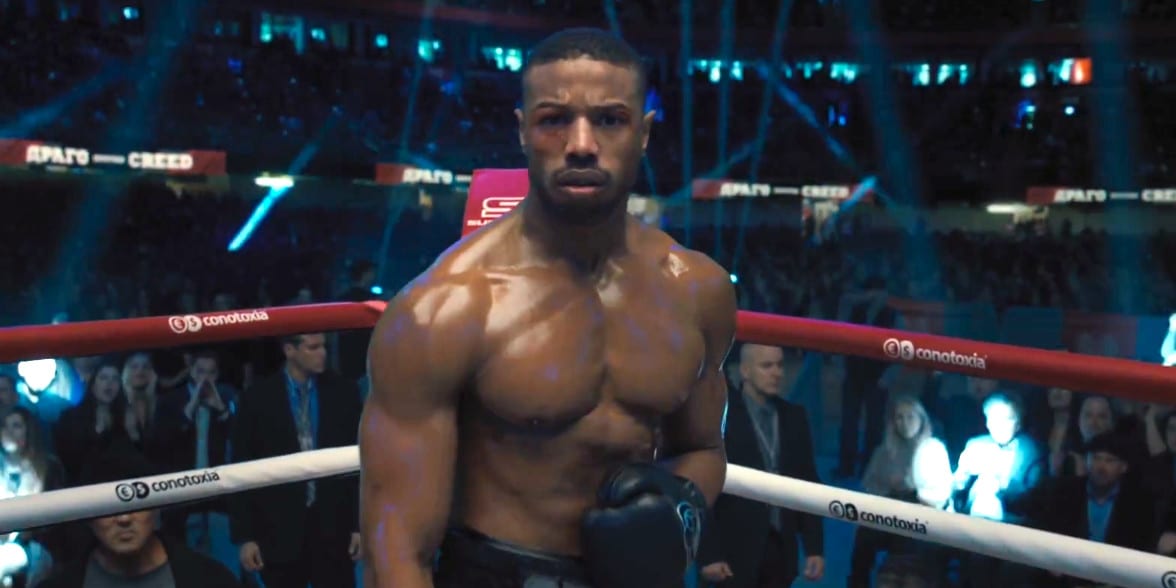 The Rocky film series has been with us for 43 years and over 8 films, they represent eras of filmmaking and the mindsets of their times. The classic Cinderella sensibility of the original Rocky (1976) with the street low budget aesthetics of 1970s realism heralded the resurgence of populist film one year before Star Wars and following dour hits like The Godfather, The French Connection, All the President’s Men and The Way We Were. A decade later at the height of Reagan America, Rocky IV (1985) is a shell of a movie but as a 90 minute music video from the 1980s it is as fizzy and satisfying as the kind of Pepsi Michael J. Fox used to chug back. After sitting out the 1990s effectively, Sylvester Stallone brought back his beloved character after a 16 year break predating the nostalgia cash in of resurrecting 80s icons like Mad Max(2015), Indiana Jones (2008), John McClane (2007), Han Solo (2015)and yes John Rambo (2008). With such a storied series there is a wealth of material to draw from for a possible Top 5 countdown, best villains, best rock anthems, best fights, best training montages, best robots (or is that sexbot?),  best behind the scenes stories, best trainers, best speeches, best themes and hell just plains best films (are you kidding me? I’ll give you a hint the one that won 3 Oscars). So to hell with it, in anticipation of the latest instalment Creed II (2018) let’s just do a Top 5 of possible Top 5s?!

There is actually something to be said for ‘Measure of a Man’ by Elton John. Never heard of it? It played out over the end credits of Rocky V (1990) so that’s understandable, it’s a typical ballad with big production sounds that the Brit was doing at the time, better examples of the style would be his hit ‘You’re The One’. Yet the lyrics here are quite appropriate in a film that shows Rocky learning to re-evaluate his legacy and how what he leaves his son in terms of values is far more important than valuables.  “You’re out of time, you’re out of place. Look at your face, that’s the measure of a man.”

The Rocky IV soundtrack sold over 1,000,000 copies and featured two singles that reached the BillBoard Hot 100 Top 5, James Brown’s ‘Living in America’ (No.4) and Survivor’s ‘Burning Heart’ (No.2). Ever heard of Robert Tepper? Well he had his sole Top 40 single with ‘No Easy Way Out’. In the film these songs feature in the following, a drawn out unnecessary cameo by James Brown introducing the exhibition match between Apollo Creed (Carl Weathers) and Ivan Drago (Dolph Lundgren), Rocky landing in the Soviet Union at an airfield and being driven off to his training cottage, and Rocky going for a drive after an argument with Adrian (Talia Shire). One could make the argument the film was simply an exercise in marketing and yet the songs and film made millions so…. It’s a far cry from the guerrilla filmmaking around Philly in the mid-70s but you can’t deny those involved knew exactly what they were doing. It may seem quaint now, but Rocky IV was a reflective of a time and place when a country and a people after many years of being down on itself were feeling good again. As a director Stallone too makes Rocky IV effortlessly good looking stealing the lighting of Michael Mann and possibly even Tony Scott and the fast paced editing of MTV. More pop than art, it remains a guilty pleasure to this day for certain generations. Interesting enough the song that featured prominently in the film ‘Hearts on Fire’ by John Cafferty failed to chart higher than Number 76 which just goes to show people always have their own mind. As good as the Rocky IV songs are for pure 80s cheesetasticness (it’s new word just go with it), there is a song that features in the opening of Rocky IV that belongs to Rocky III (1982) and has to be hands down the best song of the series.

‘Gonna Fly Now’ from Rocky is iconic yes, but its power comes from the score that Bill Conti wrote, as a piece of music it maybe wins but as a song it is most likely beaten from the only other piece of music that has become symbolic of this film franchise and that is of course Survivor’s ‘Eye of the Tiger’. Requested by Sly Stallone when Queen wouldn’t let him use ‘Another One Bites the Dust’ the song went on to sell millions, be Oscar and Grammy nominated and remains the band’s biggest hit and is a downright necessity for any best of 1980s compilations. Hear that opening riff and I dare you not to start tapping your feet. 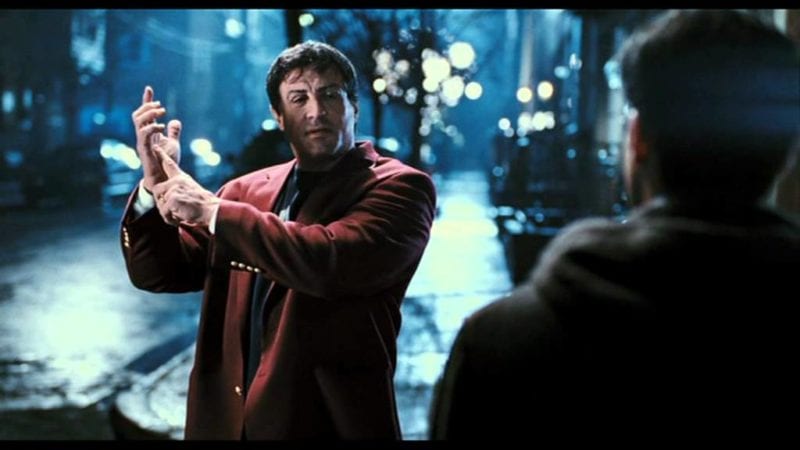 There’s a few healthy runner ups even if still only one obvious winner. Ask any baby boomer what it was like to grow up in the shadow of nuclear holocaust. The thawing of relations between East and West was inexplicable and welcome as the 1980s went along. Made at a time of pivotal change but still with the cold war in full swing Rocky’s ‘We Can Change’ speech at the end of Rocky IV still brings a lump to the throat simple as it is, it still reflects important truths about the need to put aside our fears and come together. Improbable? Yes. Stirring well as the old Philly southpaw himself would say “Absolutely.” A quick shout out for Mickey (Burgess Meredith) fans, flashback Mickey’s “Get up you son of a bitch because Mickey loves you.” speech from Rocky V ain’t half bad either.  “Because then I’m gonna know I wasn’t just another bum from the neighbourhood” speech gets to the crux of what the original Rocky was about. That having a go is what matters most and not just letting life pass you by and being prepared to take your licks. Rocky is so tied up in what Stallone had experienced as a struggling actor and being told he was no good that it’s no surprise that subsequent sequels reflect what is going on with him personally too. Rocky III and Rocky IV are grandiose commercial hits with Stallone conditioning his body to perfection and wanting to be the best at what he does but lacking the heart that was there earlier. Rocky V is a search for new meaning and a recognition of time passing on but these themes would be better reflected in Rocky Balboa (2006) where years later Stallone’s career had further declined and he was able to funnel more of his being treated like a joke and a has-been into Rocky’s story in the process redeeming his famous film franchise, his beloved character and his own career as an actor, writer and director. So it is in Rocky Balboa that the best speech exists and those who underestimate Stallone as a screenwriter need to look at his speech to Rocky Jr. again. 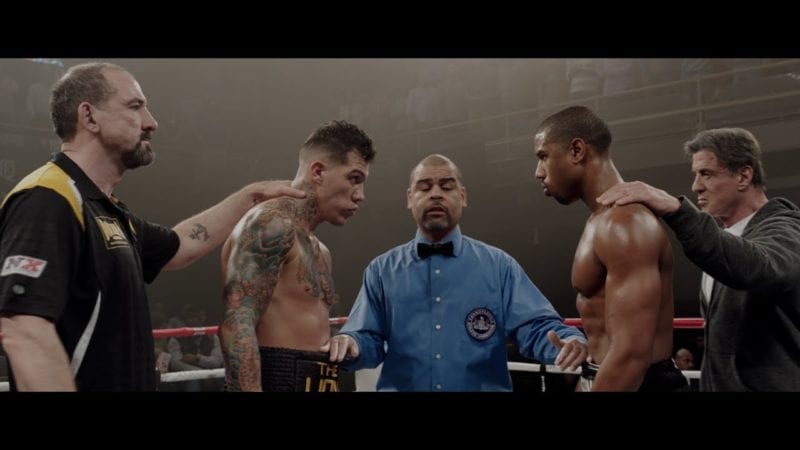 This isn’t even a contest; it’s the middle fight from Creed (2015) between Adonis (Michael B. Jordan) and Leo ‘The Lion’ Sporino (boxer Gabriel Rosado). One take, only blocking the actor from camera to apply make-up and not missing one a beat of choreography against a real life fighter. Plus let’s face it, most of the fights throughout the series have not aged well, the sound effects in Rocky IV make it seem like a car is getting beaten up, you can see where punches don’t connect and Balboa frequently has his guard down. That’s okay; the fights were always metaphors for the characters and their struggles. Even now you can’t help but still cheer for Rocky to get up in every single one of them. Yet marrying those instincts with solid film techniques in Balboa and Creed pay dividends. The best example remains that middle fight though. 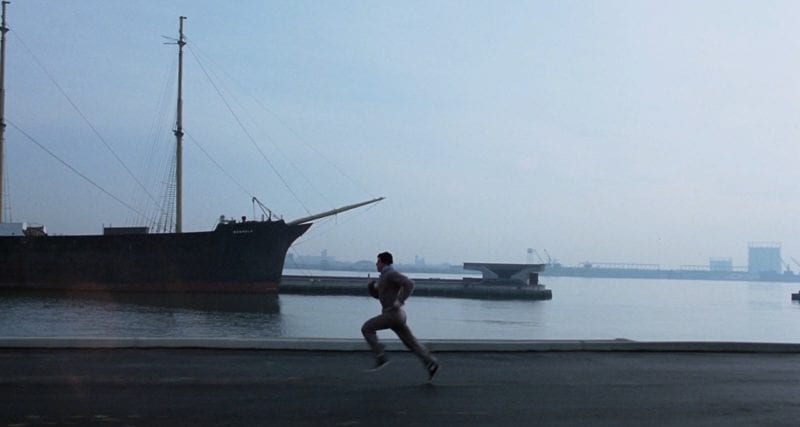 There’s a lot of ways to judge these. Is it the best song? What inspires you to train the most? The most cinematic shots? The best illustration of the character’s will? The training montage is very important to the Rocky series, usually featuring an early one where the heroes doesn’t have it together and the second more triumphant one leading into the fight. Usually follow a moment of support from Adrian where the mind and body can finally be in unison fixated on one primary goal with a self-belief that it can be achieved. It’s important to remember the original Rocky followed the montage with scenes that reinforced the odds Rocky was up against and set the stage for triumph in defeat. Celebrated as they are, it is not about the one arm push-ups, skipping ropes, and mountain call outs. The whole point of running up the steps of the Philadelphia Art Museum is Rocky has won in that moment because he has climbed his own mountain. In the original Rocky it’s not about winning but about being the best you can be and not running from the challenge. You may get parodies of Stallone yelling “Dragoooooooooo!” at the top of a snow capped mountain. Yet which is more stirring? Sly Stallone breaking out into that sprint on the docks in 1975 for sure. 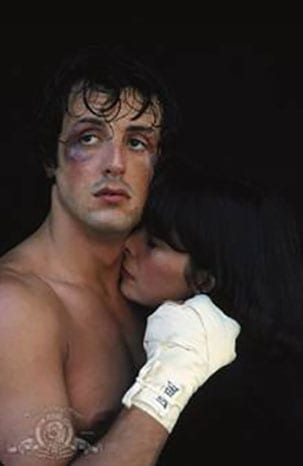 We’ve already made the case that Rocky IV is a terrible film but a great music video. Of all the sequels Rocky Balboa and Rocky II (1979) are probably the most solid. Each a respectable sequel that advance the story of the characters in natural and interesting ways. Rocky remains a venerable classic and surely the champion of the series but the spin-off Creed make a good case for taking the title. For starters its female lead has a lot more going on than being a shy wallflower with an abusive brother, yes Adrian had an arc and became a more well-rounded character, her development in confidence and outward appearance a nice mirror of Rocky’s own. Yet the conversations between Michael B. Jordan and Tessa Thompson have are far more interesting and about both of them pursuing careers that they love. There are also more developed subplots in Creed with the history or Adonis’s father Apollo weighing on the son and Rocky himself getting cancer. Yet part of the appeal of Creed is how well it does, yes, create its own thing but as a variation of the original story told so long ago. For that reason alone Rocky might remain the best.