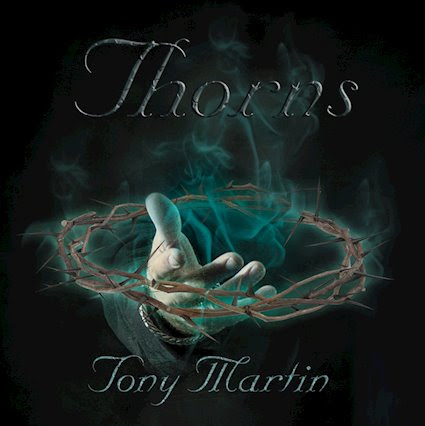 In fact, initially from 1987 to 1991 and again from 1993 to 1996, Martin was the band’s second-longest-serving vocalist after Ozzy Osbourne. I had no idea, but luckily his PR team were nice enough to include that info in his press release for me. All I actually know is that he has been all over my social media lately, so I’m guessing this is as much of a big deal as the filthy Rona. Best I give his new album Thorns a listen and let you all know what I think about it.

Opening track As The World Burns kicks off with some very traditional sounding metal riffs and as the vocals enter I’m instantly drawn back to a sound synonymous with early 80s British heavy metal. In saying that, the tone is a little more modern and the riffs and rhythms definitely take on some inspiration from more modern metal genres. That voice though, flawless in clarity, definition, key and delivery. No auto-tune necessary here!

Black Widow Angel follows up with a slower doomier intro not too unlike modern doom/sludge metal, or even the latest Sabbath album 13. The track rocks and grooves through blues riff after blues riff, and Tony’s vocals carry across the track and hold it all together. The track ends, or so I think it does, until the weirdest bass line I think I’ve ever
heard takes me on a completely unexpected journey.

What would a heavy metal album be without a good ol’ gospel chant?

Boring, it would be boring.

Luckily, Tony hit’s us with a gospel chant in the intro to Book of Shadows. This track burns very slowly over the chants which continue throughout the track. Lyrically and vocally, the song is very impressive.

Now, that’s an interesting touch. Damned By You kicks off with what I think is a saxophone solo. Guest appearance by Kenny G, maybe? This one again slots into that doom/sludge metal type vibe, while Tony’s vocals keep it in line with a more traditional metal sound. It’s not a fast-moving track, and it kind of just rocks along to its own dirty blues riffs and sludge rhythms. Add a last-minute guitar solo and a quick sax fill and the track’s done.

No Shame steps up the pace with a much more rockier and upbeat beer metal type sound, and we hear Tony sing about someone getting screwed in the car park at the mall. Good times, and no shame at all. It’s a rocker, and it’s certainly grabbed my attention more than the tracks which precede it. The bridge strangely reminds me of something which I can’t quite put my finger on, and it’s a weird twist which may not have been necessary. It still works though, and they bring back the riff to tie up the song!

No one ever asks for a slow burner, but we always seem to get one, and Nowhere To Fly arrives unwanted like a speeding fine. What to say about this one? Well, it’s slow, and it shows the softer side of the artists involved, which I guess is a good thing amongst the sludge riffs which poke their head out here and there. We can’t all just keep running around like big tough metalheads can we? I mean, we all play with the kids toys when no-one’s looking right, right?

Passion Killer, that last track just might have been, but this one steps up the game with a heavy chugging groove to introduce us to the song. I’ve gotta be honest though at this point and admit that even though Tony delivers this vocal style flawlessly, I’m not the biggest fan of the style. While full of some quality riffs and drums fills, this song seems a little disjointed and unstructured to me. When it catches you, though, it does catch ya like the filthy Rona.

This next one is more like it, classic traditional metal riffing flows through Run Like The Devil, and I feel like I’ve transported back to that short period in time where I decided I’d get all historical and give Iron Maiden a listen. Some bloody nice guitar work by album co-writer Scott McClellan bursts through the middle of the track and gives it a little extra life.

Ok, now we know from Metallica’s past efforts that no one ever asked for a Country Metal crossover, even though 20 years later people started to get it and should I dare say like it. Maybe that’s the future for This is Your Damnation, maybe not, but if you’re into your country jams, this one is for you.

A short acoustic guitar piece introduces the final track, Thorns. Is it the token end of album ballad that we too often hear. Of course, it is, at least for the first minute and a half until the song picks up a little pace and a lot of distortion to shift into a slow rocker scattered with screeching harmonics. It never really takes off as such, it just slowly burns and rocks away while building intensity. Tony reaches some massive high notes, which I wasn’t even sure were possible from a human with testicles. A well written and well delivered ending to the album.

I probably should have done a little research and listened to some of Tony’s earlier material to get an idea of what to expect and just how this fits in with his back catalogue.

Nevertheless, I think I just got some kind of lesson in traditional metal and how to integrate it with more modern sub-genres like sludge and doom.

It’s an interesting album but not really my cup of tea. I’m more of a peach iced tea kind of guy than an English breakfast one.