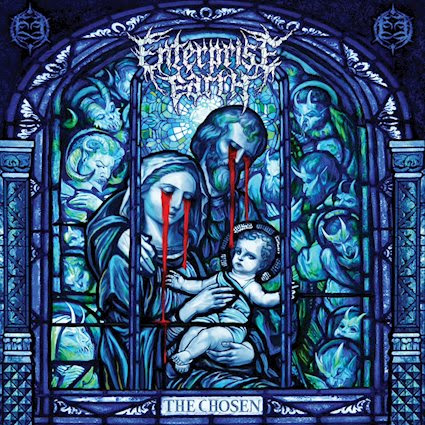 Now that I’ve found a new love for the Death Metal genre after reviewing the upcoming Corpsegrinder album a couple of weeks ago, what better time than to review a band claimed to be among the most celebrated death metal bands of the modern era?

That band is Enterprise Earth, and I’m not sure if that claim is of their own and their press agents, or the general public, but what better chance to investigate that claim then to review their latest full-length album titled The Chosen.

Some dark synth and terminator style drum hits gets my journey started, and I’m immediately thrown into a barrage of heavy riffs and blasting drums. This brutal assault continues as vocalist Dane Watson switches between guttural screams and gremlin like screeches. Surprisingly, though, the choruses and bridge introduce some unexpected melodic vocals that I’m not generally familiar with in this genre. The song hits a crazy breakdown followed by a guitar solo and a return to the melodic chorus.

Is this that oxymoron of a genre they call Melodic Death Metal?

The following track Reanimate Disintegrate opens with some djent on a note so low I think I almost shit myself. The riffing in this song when it unleashes is whack. Is this some kid of Death Jazz? Whatever it is, it draws my interest and keeps me listening for what’s next. A weird interlude is what I got and while a possibly unnecessary twist, it dooms hard and eventually lends itself to some classic death metal before returning to its own roots.

I wouldn’t ever expect classical guitars to introduce a track titled Unleash Hell, but that’s exactly what I got before the band absolutely ripped my head off and, quite possibly, actually unleashed hell. Some impressive melodic lead guitar work laces the track and adds a nice touch to an otherwise relentlessly brutal composition. That is, until the song takes another unusual twist in its third and final act, but I’ll let you discover that for yourself.

I Have to Escape slows down the pace a little with more of a grooving gent, just for a little while anyway, until the verses kick in and the band brings us back to the brutal. Relentless double kicks carry the heavy riffing of the guitar and bass through the track, while the vocalist switches between multiple vocal personalities.

An instrumental track titled The Tower takes us on a short but epic journey into They Have No Honor which builds intensity with some massively detuned chords and hammering drum fills before absolutely melting my face off. Ferocious and brutal best describes this band and this album thus far. A classic thrash section mid-song completely switches the song’s vibe and blesses us with some serious shredding of the old axe by guitarist Gabe Mangold.

With 8 tracks to go on this album, it might be a good time to take the next overpass and bypass some of this traffic. Well, not really, but the next track is titled Overpass, and I’m glad I didn’t skip it because it’s a fucking ballad. I mean, it was a ballad for the first 2 minutes, and still kind of is. If there is actually something called a death metal ballad, I’m guessing that this is what it would sound like? At least until it just becomes death metal again, death metal with melodic vocals, that is.

I’m at the halfway mark with this one, and I’ve gotta admit, it’s pretty fucking good shit. I’m not sure how it will float with the old school death metal veterans though with its melodic vocals and inter-genre experimentation, but who gives a shit what those fucking boomers think anyway, right?

The remaining tracks You Couldn’t Save Me, Legends Never Die, My Blood Their Satiation and Skeleton Key continue to serve up the relentless brutality of the tracks before them. Each with their own little twists and turns of genre integration.

Unhallowed Path surprises us as a classical guitar piece with some very soft and gentle lyrics. The Chosen, while heavy for the most part, introduces us to some kind of Death Metal/Elevator Music crossover which is a bit strange but somehow works. Atlas completes the album as an instrumental synth piece which is really just noise, calming noise which is probably just what you need after this absolute onslaught of an album.

Yeah, good shit aye. Not for all, but for anyone who can handle brutal and melodic in the same cauldron, I’d definitely be giving this a listen. It’s really great to hear so much experimentation within what was classically a fairly well-defined and somewhat limited genre.

Get it in ya earholes!