There seems to be no stopping Tom Cruise and the Mission Impossible juggernaut. While these days people get tired of franchises before too long, Mission Impossible (and Fast & Furious) are out of the equation. It looked like Twilight and Divergent limped to their finish lines, and well technically Divergent never really got off its knees–there’s a long history of Hollywood franchises fading away.

When it was first announced that the television series would be rebooted as a movie franchise and starring Tom Cruise, some people laughed. Now those people can hang their heads in shame as Mission Impossible gets stronger and stronger, the people behind the scenes thinking up bigger and better stunts for each film and audiences to lap up. Hell, before we even knew that the latest would be called Mission Impossible: Fallout, people already knew that the leading man, Tom Cruise, had hurt himself on set and were dying to see how he had done it.

However, the fans are not the only ones that are excited about the franchise! As we begin the interview with Cruise, it was clear to see that he was like an excited child on Christmas morning chatting about his latest action masterpiece.

“The journey that Ethan Hunt and his crew go through is an odyssey, and it is inspired and reflective of that story. It is an epic, personal tale, and there are incredibly huge stakes, emotional stakes I think for the characters,” he explains.

“The Mission Impossible team is going to be Rebecca Ferguson who plays Ilsa, and the core team though is going to be Simon, Ving and me.  Ilsa is; well, I can’t say, you’ll have to see the movie and see what happens to Rebecca’s character. But that is the core Mission Impossible team as well as Alec Baldwin as The Secretary. Each actor I think is very dynamic, very charismatic and I am interested in all of their stories. When I see them all together I believe in that story–that is what I want out of a movie-I want the audience to experience that on screen. Some of my favourite movies have that, just a group of great actors hitting their stride and I know that is something that McQuarrie and I worked very hard on and think about… it is something we love about movies and storytelling.”

Part of that team is the director Christopher McQuarrie whom Cruise seems to love working with, “I love working with McQuarrie and the way he approached it. He said ‘I am going to honour Mission Impossible’. And he did, it is different, I think it has his bold sensibility of story-telling. It is not more entertaining but, I feel, we just pulled out all the stops because all the Missions have led to this one and McQuarrie is a very elegant and classic filmmaker. I love his wit, the toughness of the movie and the characters, and it is just a beautiful movie. I can’t wait for you guys to see it. When I look through the movie, I think McQuarrie is just enormously talented. It is always such a joy to work with him.”

It doesn’t take long to realise when listening to Cruise that one of the reasons that this franchise has lasted for so long is because it is a passion project for him and the people around him. “I loved the television series when I was growing up,” he says with a glint in his eyes.  “I loved the music so to be able to turn it into a feature film and to take it from a Cold War series to this modern day audience and cinema; it is without a doubt one the most challenging films to produce. They are challenging in a sense,  McQuarrie and I will sit down, spend a lot of time, sometimes a couple of years, working on different sequences because Mission is about practical action. That is what we want to do. We want to look at things and see how in every way we can create a movie that is elegant and entertaining, that is high in aesthetics, gripping and uses all of our skills as filmmakers. It challenges every department, and you can see their faces every day as we are going through it. It is such hard work, but there is an exhilaration also and a real joy from everybody that they get the opportunity to challenge themselves in this manner.”

Despite it being a ‘love’ project of sorts, it is also easy to see that Cruise is always looking for the next way to excite fans of the franchise.

“We always look at doing things practically but look at how we can immerse an audience into an environment, how do we immerse them into a story or a character and then put them in extreme action and do it practically. Whether they realise it or not there is something for an audience when you see it. That is why I always try to push myself. Everything that I have in every way; my talent, my physical ability – it does make a difference.  There is something about it and as time goes on it is always interesting when you look at a Mission Impossible trailer, and you put it up against other trailers, and it is just different. It has a different look and a different vibe, and that is what I want to give an audience.”

To hear Cruise talk about the work and stunts that he did on this film is fantastic and impressive. He talks about going to the UAE (United Arab Emirates) for a week and staying for five weeks because they had to get the right shots, he talks about flying a helicopter through mountains like he is going for a Sunday drive and actually laughs when he recounts hanging from the side of a helicopter holding onto a rope on a day that is so cold he can’t feel his hands.

He laughs again when bringing up the stunt that saw him get hurt on Fallout. “The foot break?” he says with a huge smile as he laughs. “It was just one of those things. You can see it; I have a cable above me and a cable just in case I fall. But the thing is I have to run as fast as I can, and I am going to try and make it to the other side. That is how you have to do that stunt. The first two takes I went in really hard, and it takes the wind out of you, you blow a bit, and you really have to try and recover just from the wind being knocked out of you, but it looked cool so I was like ‘let’s do it, I can do this.’ So we went in, and the second I hit the wall I was like ‘oh man’ and I looked down to check it and thought I have to keep going, so I crawled over the wall and went past the camera because I knew this was the take, but I knew immediately that it was broken. So I called McQuarrie, and the guys and I said ‘I’m sorry it’s a wrap I broke my ankle’, and they looked at me and said ‘how do you know?’ and I was like ‘oh, I know it is broken, let’s just get me to hospital.’ I did everything possible to get back, and within six weeks we were filming, and within ten weeks I was able to start running again.”

With so much blood, sweat, time and tears going into Mission Impossible: Fallout it is hardly surprising that the ‘wrap’ was a joyful experience. “When you get a wrap you have finished a movie, we got that final shot and then McQuarrie, and I looked it over and then called the crew over, got them together and showed them the take. We were all there, and we all made the decision together, and you could see that when we finally said ‘This is the take’ everybody was so excited and so proud of what we had all accomplished. I think that is the greatest feeling and why I am, I think addicted to movies. It is something where you are working with enormously talented people working in every department that want to entertain that audience. They all love movies, and they are using all of their skills to try and create something for an audience making something that they can feel proud of.  When that happens, it is a fantastic feeling and one that you don’t ever forget really.” 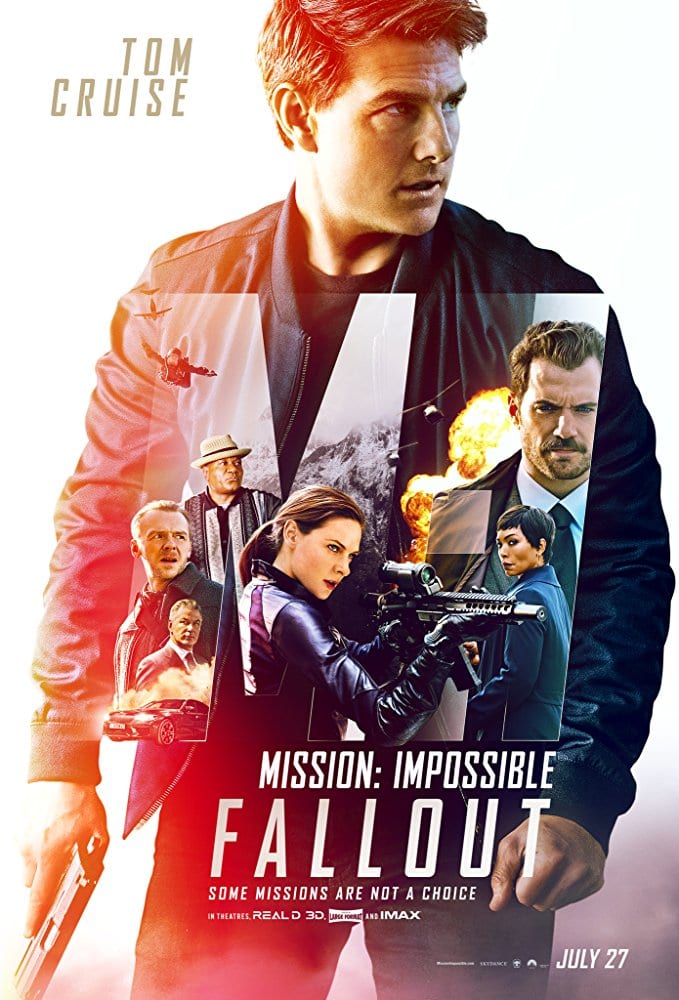