The Return Of NOTHING SACRED 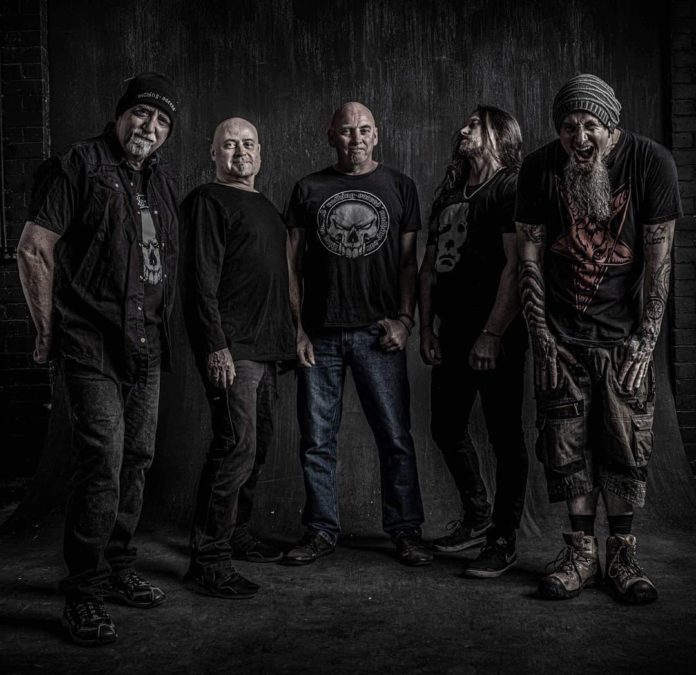 When it comes to albums it has been 33 years between drinks for Melbourne’s own thrash specialists Nothing Sacred. “It was never planned it just kind of happened that way,” says band member Karl Lean.

Planned or not that break never saw Nothing Sacred become forgotten. The band exploded onto Melbourne’s metal scene in the early 1980s and then set it alight with their 1985 Deathwish EP and that was followed up in 1988 with their Let Us Prey album… but then that was sadly it when it came to recorded music from Nothing Sacred – UNTIL NOW!!!!

The last couple of weeks have seen some big announcements for the new Nothing Sacred. First they announced a new album, called No Gods which will drop on July 16th, then they signed with Melbourne label Rue Morgue Records and to top it off for their fans released a very, very limited run of Deathwish EP boxsets.

“The company that are handling our European distribution didn’t have any Australian distribution,” says Karl as we begin to talk about  why the band made the decision to sign with Rue Morgue Records. “We released a single with Rue Morgue last year so it was a pretty easy step to just keep that relationship going that was already there. We’ve been really happy with John and I think that he has been really happy with us so it was just common sense to keep that relationship going.”

“So now we will go beyond that 7 inch vinyl release with him and it will go through to our album,” he says continuing. “We are so excited about it… we feel really great.”

Likewise the band say they are incredibly excited about the fact that their fans will soon get a chance to take a listen to the brand new No Gods albums, especially after the reaction to the first single released titled Final Crime.

“A couple of the tracks on the album actually date right back to the late 80s and the early 90s,” explains Karl as we begin to take a look at some of the tracks on the album. “We did actually record another album at the end of the 80s that never got released or finished. I think everything got tracked except for two tracks and we had started on the vocals and then everything went the way it does in bands sometimes… stuff happened.”

“So we wanted to go back and resuscitate a couple of tracks from that session,” he continues. “They were great tracks that we did back then and I think they are still great songs. So we pulled a couple of those out and we had all been writing throughout the years, but then four years ago we thought it was time to write even more tracks, polish it off and get it all done.”

Just like the band’s fans had not forgotten them over the years Karl says for the band themselves the magic of song-writing never dissipated either. “So we got together to start writing and to be honest the initial sessions went by really, really fast. We wrote four or five tracks in just a couple of weeks, so we ended up with about fifteen or sixteen tracks that we did demos of and we were experimenting with which ones to use and which ones not to use and in the end we just went with the ten that we liked the most.”

With the album set to be released in July Karl admits that the band does have plans for after that. They would love to book in some live gigs but are just waiting for the right time… and of course to see whether or not everything remains open.

“At the moment we don’t feel quite ready,” he admits. “We just have to shake out the cobwebs and make sure that we get around to doing it that we don’t embarrass ourselves. We had always loved playing live so we aren’t worried about it, we just need to get rid of those cobwebs, so I guess just watch out for the second half of the year and we will be out there.”

And to finish off Karl says there will also be some great goodies being released about the same time as No Gods drops as well. “Be prepared to give it a good listen,” he says as we begin to wind down the interview. “This album covers a lot of ground and I think we have a lot of different tracks on there. We like the coverage of the different feels on there – it is not a one dimensional album by any means. Look we are very happy with what is happening at the moment – working with John we have a great T-Shirt design that is going to come out with the album as well so we will be pushing that in about four weeks time – so if anybody wants to jump on and support us by grabbing that – that will be great.”

No Gods will be released through Rue Morgue Records on July 16th.