The Futility Of Worrying With BELUSHI SPEED BALL 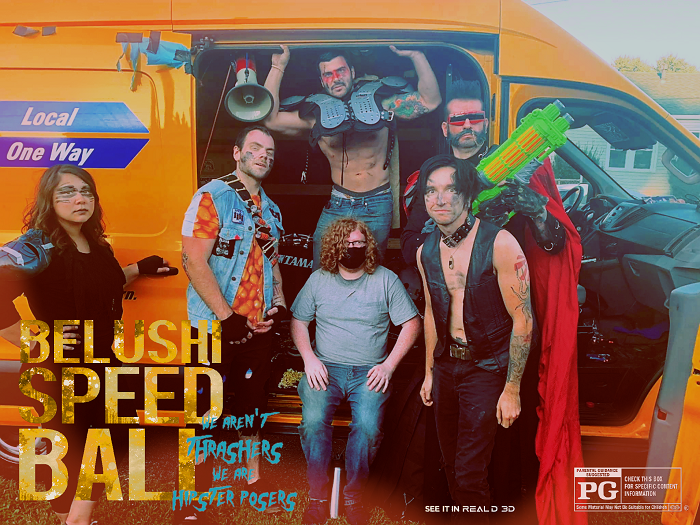 It’s not often I will publicly come out and endorse a band, but if you have not yet been touched by the charms and ferocity of Louisville metal pioneers Belushi Speed Ball, then I suggest you go out and binge yourself and enter the playfully beautiful and bizarre world of a band who genuinely don’t give a solitary fuck.

Except when it comes to their music, and perhaps even then they can only manage to muster maybe one or two fucks.

But when the world you live in is so eclectically creative, there is little room for any form of logic, rhyme nor reason.

On May 27 Belushi Speed Ball will unleash their latest album What, Us Worry? and the title alone is an emphatic statement of where the band sit in the overall scheme of the increasingly cutthroat world of music.

The band themselves have described the album as “The Sistine Chapel of generic, cliché, crossover thrash” and if you can make heads or tails out of that then you are an infinitely better man than me!

What they have delivered on What, Us Worry? is a pulsating slab of punk, metal and hardcore the likes you have probably never heard, and they do so with enough lashings of humour that should they ever decide to do the stand up comedy circuit then I would be front and centre vying for a ticket.

What’s more, Belushi Speed Ball are releasing What, Us Worry? on the unusual additional platforms of N64 and Gameboy Advance, for reasons I am still unable to comprehend after spending a good 20 minutes with four members of the band, who, incidentally, chose the unusual setting of an above ground swimming pool from which to conduct our interview at 8pm their time.

Read on, if you dare, and prepare to be swept up in the wonderful, zany, and downright entertaining world inhabited by Belushi Speed Ball.

We start by asking the band to describe What, Us Worry? musically.

“Open E, chugg it,” vocals/guitar Vinny shrugged. “You do this (makes shapes with his fingers while the rest of the band play air instruments and nod in agreement). It’s the best cliché crossover thrash album to date. It’s the Sistine Chapel of generic.”

While that is a great statement and sounds awesome, I ask the band to elaborate on what it actually means.

“The Sistine Chapel’s kind of boring,” Vinny returned. “Everyone says ‘it’s so beautiful’ and everything, but he’s no Picasso, you know what I mean.”

“If he’s so good, why didn’t they have seventeen chapels?” guitarist Kyle added.

“Exactly,” Vinny agreed. “Crossover thrash is just real generic, and we’re the kings of generic E. Open E as fast as you can. Metallica did it fifty years ago, and we’re just riding their coattails.”

The album opens with the brutally fantastic Ripping Off Municipal Waste, a song whose title pretty much says everything is to say about the track, but why choose that particular band to rip off sonically?

“Oh, man, they’re the Kings right?” Vinny beamed. “They’re Gods. That comes from… we were playing a show and someone came up to me and said ‘at least someone around here is ripping off Municipal Waste‘ and I think he meant it as a compliment, but it stuck with me, so we wrote every single Municipal Waste song as Belushi, and we did it and ripped them off. So we did that, and I don’t know, they’re the Gods, they’re the Kings. We owe them everything.”

In the full interview, the band runs through the album in more detail, talk about the skits that punctuate most songs, dissect their music more, the title and its relevance, releasing the album on N64 and Gameboy Advance, the early days of the band, where the name comes from, Christmas in May, and more.

Purchase the full album on N64 or Gameboy Advanced: belushispeedball.bandcamp.com/merch