TESTAMENT The Titans Of Creation 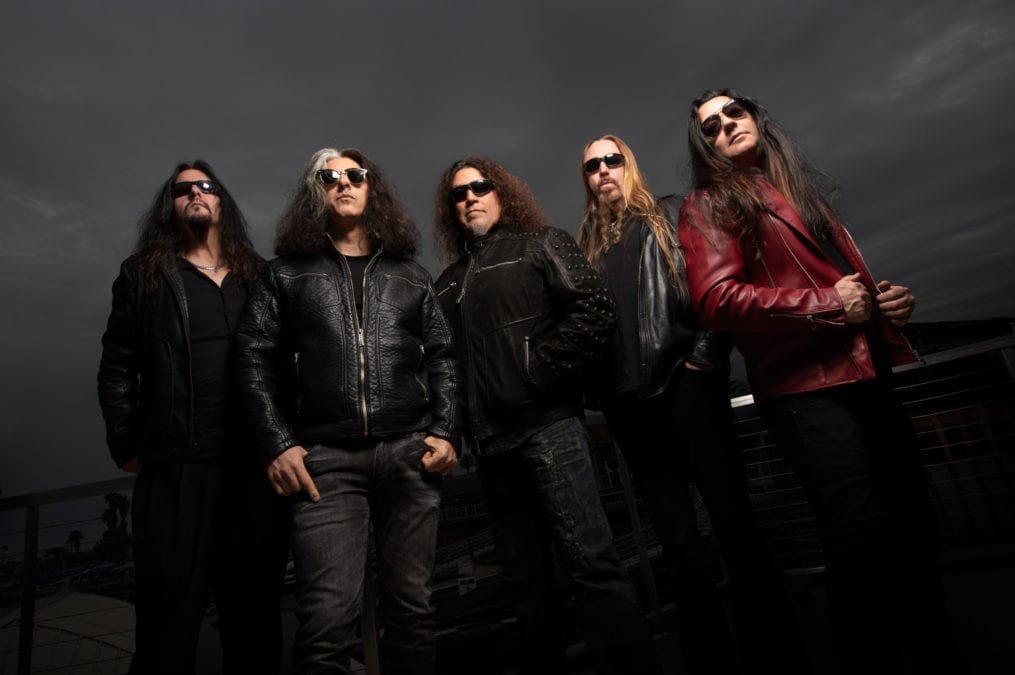 Chuck Billy is quite upbeat and jovial as we settle in to talk about Testament‘s recent album Titans of Creation, surprising considering he has not long gotten over the potentially fatal Covoid 19 virus which he and several of his touring party contracted after completing a European tour just as the crisis was being elevated to the pandemic stage.

Titans of Creation is out now and can be bought through nblast.de/TestamentTitansAU

After glossing over his ailment and recovery (because we want to hear about the 13th album from the thrash metal legends – we already know Chuck Billy is immortal) and before the tone could become too sombre talk soon switched to the latest opus that emphatically proves Testament’s high standing among thrash metal’s elite.

“The reception has been good”, Billy enthused. “It’s a good record considering what we had to do and the process of putting it together, I’m quite proud of it. I think it’s probably a decent time to put it out too. Everbody’s got a lot of time on their hands sitting around at home so it’s good to give them something new to listen to”.

Thirteen albums into a career that has seen Testament consistently release quality music without becoming formulaic, Billy admits that the band no longer puts expectations on their music, but rather adopts a more wait and see approach when it comes to fan sentiments.

“We let each album run its’ course”, he shrugged. “We don’t know what songs are gonna come out of us. We always know that the new record is gonna be different – they are never really the same – but on this record Eric (Peterson, guitar) really surprised me and wrote some songs that weren’t your typical choice of chord progressions and chords he would let me sing on normally so it really put me out of my comfort zone I guess and made it a little more creative. I think this record in that sense was a plus because of that”.

When HEAVY last spoke with Billy earlier this year he made the bold statement that Titans of Creation contained some of the best work Testament has ever done as a band, and now, four months later, he still stands behind that sentiment.

“I think so”, he affirmed, “mainly by way of creativity and again the structure and mood of songs. There are some songs on the record that really don’t have your typical metal feel to them but … it’s still metal, just a different flavour. Eric really went out on a limb with some of the songs that he wrote and in that sense, it came together pretty easy. The process was really we went into the studio for about five or six of the songs and let the tracks roll and just kind of muddled it out and found our way through the vocals. It was more of a feel thing and sticking with the first impressions so a lot of the songs are based around the first impression we came up with”.

With over 35 years service to thrash metal music, Testament has endured the many waves of excitement and changing faces that have crept into what is as much a lifestyle as it is a musical outlet. While steadfastly sticking to their traditional thrash fabric, Billy also acknowledges that the tide of metal is changing.

“Thrash is in a different era now”, he surmised. “The thrash that we started into is different to the thrash of today in that it has evolved. I think it’s more of the attitude and fast music, of course, but our thrash now has blended more with the melodic and mellow side of things”.

A point exacerbated on the latest album that sees the vocalist experimenting more with melodics in his delivery, which has also provided an interesting personal challenge that Billy brushes off as musical growth.

“I went in wanting to do that (add more melodics)”, he replied. “I wanted to use more of a singing tone with my voice and be a little more melodic. I wanted to do that anyway and then when Eric started presenting the songs that were different feeling and had a different vibe and made me a little uncomfortable, it really made it more so where I really wanted to find the melody or find where to write on top of that riff and make it smooth. As I said, we went with our first impressions on a lot of these songs and after all, is said and done it feels right”.

Not only did this approach bring out the best in Billy as a singer, but it also helped change up the recording dynamic that determines the nature of the musical output.

“I would say its harder to keep coming up with new music if you stick to a formula and all of your songs are kind of the same”, he measured. “In a sense, I’m fortunate that Eric is really pushing the envelope and coming in with something different and creative and keeping us on our toes. At this point, it’s more let’s see what’s gonna happen because when someone asks what’s the next record going to sound like we really don’t know. Based on this one we said we wanted to make it more thrashy and I think we accomplished that so what do we need to do to top it? I think I just need to soak it up a bit more and think about what we’ll do next or figure out what worked on this record. There’s some stuff where Eric ended up singing the lead vocal parts and he’s never done that on records before. We will just sit back and take it all in and see how it goes”.

Surprisingly, Billy admits that after seeing and hearing what he could accomplish vocally on Titans of Creation that he still feels he has much more personal growth waiting to be harnessed with his vocals.

“I think I have quite a lot of growth in me”, he smiled. “It surprises me all the time. I think our live show is pretty smooth in that sense but with writing this record on songs like “City of Angels” I found another texture and layer to my voice and did harmonies on the bridge and chorus and I never do that shit, but on this one, I did and tried experimenting new things and found different voices and textures. For me, after 13 records and still being able to create something or have a different feeling on some things is pretty cool. That’s when it’s being creative”.

Titans of Creation is out now and can be bought through nblast.de/TestamentTitansAU 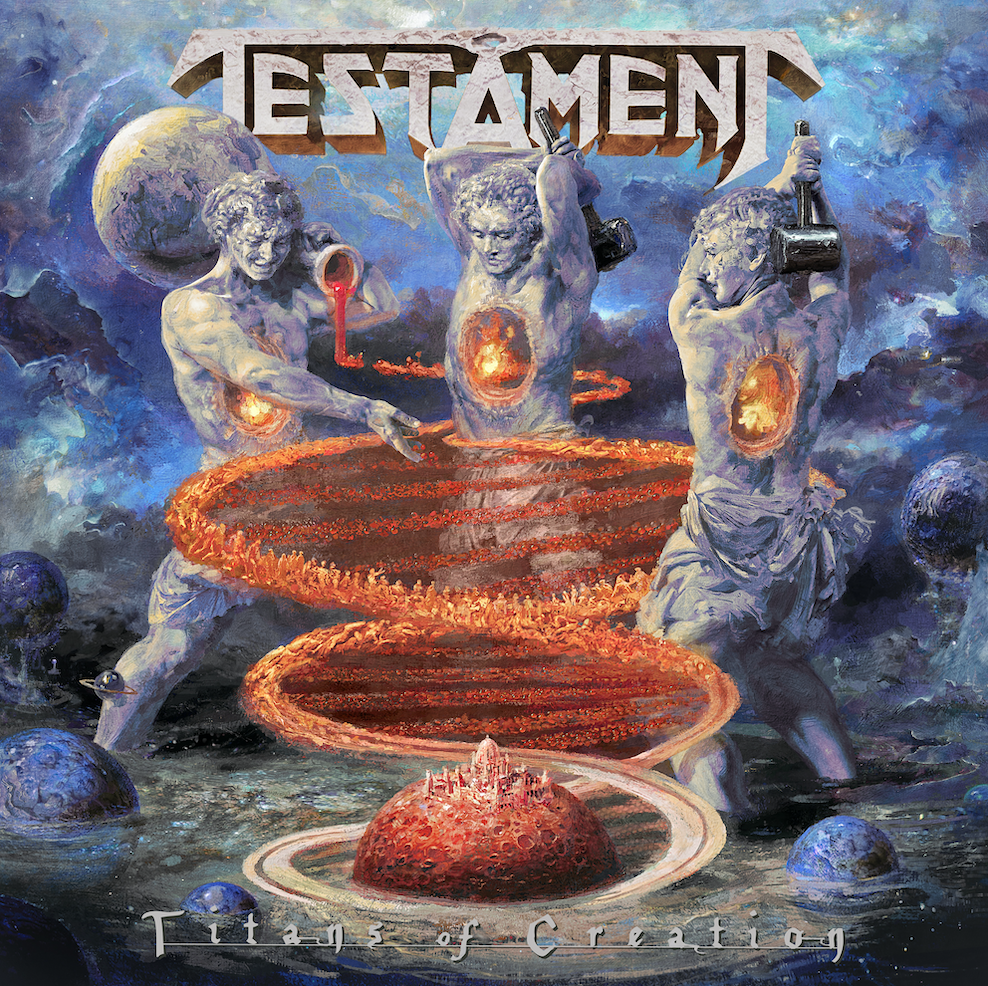