SULDUSK and The Lunar Connect 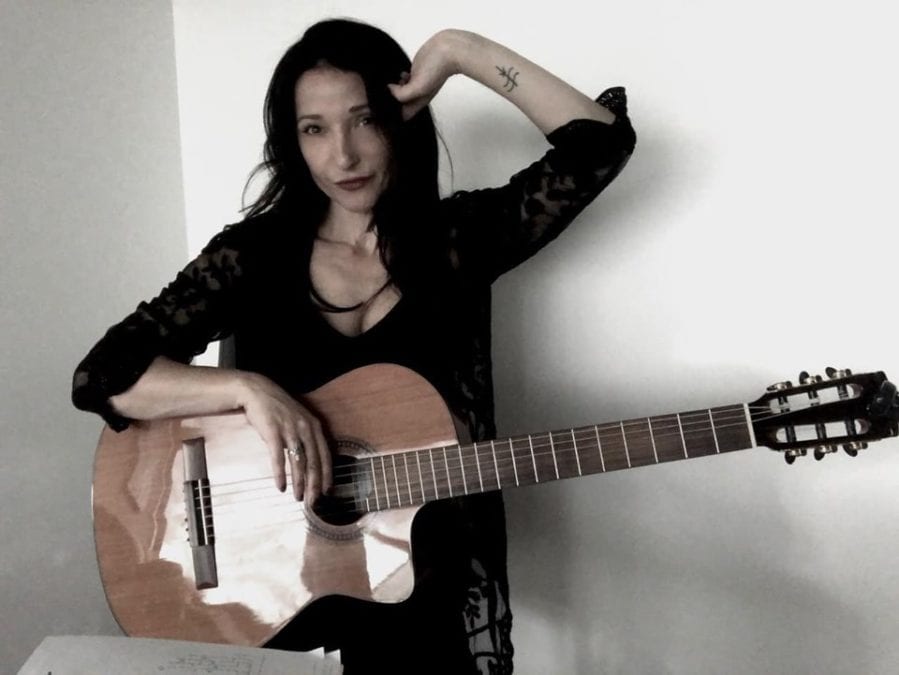 Regardless of the variety of artistic expression, it would be a more-than-acceptable belief that the artistry was driven by emotion to some decree. An even more fascinating feature is what emotional reaction is brought about by those who are fortunate enough to witness the creative activity. It is a bewildering energy that has no real quantifiable or absolute answer, but more-so a ”mind journey” for all who care or dare to be involved. As the prolific and influential non-binary and transgender actor Indya Moore once said: “Emotional information is very, very rich in influence. You’re giving somebody something to connect with, to see themselves in.”

For Emily Highfield the woman and mastermind behind the phenomenal blackgaze neo-folk project Suldusk, this quotation is more than becoming, it is nearly perfect, but from both sides of the spectrum. The Melbourne-based songstress has multiple notable influences, however a prominent one is Swedish progressive doom metal act Trees Of Eternity – a band whose vocalist Aleah Starbridge sadly passed away in 2016. Not only did this heartbreaking event affect Emily, it propelled her; their song “Sinking Ships” was an emotional and influential catalyst for her to create the stunning song “The Elm” from her debut album, an adaptation of the Trees Of Eternity track. As Emily explains, the emotional element to the song and who influenced it can be an adverse yet illuminating experience for herself:

“It’s very much a tribute song, the song is trying to keep that gentle spirit of hers (Aleah Starbridge), both the music and the integrity she brought with her vocals. I am always trying to be as respectful as I can be when I perform it and it is for me very therapeutic. Truthfully, I may even be little bit selfish, because when I found out she had passed away it was just after I discovered Trees Of Eternity and I was in total disbelief; so when I made contact with Juha Raivio (guitarist) and asked for his permission, he was just so generous and supportive, it blew my mind.” She describes with a hint of bewilderment – “I definitely hide a lot of tears and that song is very poignant, if things become a bit rough for me I just remember that song and the fact that she isn’t here anymore, but her talent lives on and she has inspired and connected with so many people. It gives me strength, I get over my issues and stay true and strong.”

The aforementioned “other end of the spectrum” comes from Emily herself; what her artistic output with Suldusk has achieved is astounding in the best way possible. Her debut album Lunar Falls has now sold out of multiple pressings both here and overseas. Her label Northern Silence Productions has had such an inconceivable demand for the LP that it could almost be renamed to “Sold Out”. A myriad of fans worldwide have emotionally connected to Emily’s artistry so overwhelmingly that it is for her, unfathomable:

“It’s really very heartening that the pressing sold out, to have people connect with it, which I was really unsure of whether that would happen. I knew I had to be completely genuine and people have responded to it. It is really surreal. I mean it is so hard to grasp, I am trying to ‘ride the wave’ as they say, trying to enjoy it; I am allowing myself to feel the love if that makes sense (laughs)?”

She continues – “I really did hope that there would be some people that understood the space, these are realist songs, I’m not trying to be something that I am not. I just hoped that people would connect with them and it is a good feeling to know that people are getting something out of it. I have had messages from people that have expressed gratitude and that my music has come along at the right time for them. It is pretty fantastic; truthfully though I just hoped some people would just have a listen but it has become so much more and I am very thankful.”

However, the decorations do not stop there; Lunar Falls has garnered glowing reviews critically from all over the world and placed Suldusk on a trajectory that Ms. Highfield could not have imagined when she shared demos of these songs on Soundcloud many years ago. Included in this ascent were supporting roles for British extreme metal outfit Anaal Nathrakh and adored soul black ExperiMetal (not a typo) sextet Zeal & Ardour.

“It’s pretty good considering we are acoustic!” She expresses in near hysterics – “I actually nearly fell off my chair when we were offered Anaal Nathrakh, I could not believe it, but the promoter believed that it would work and it really did on the night. I think we were just a good warm up for the chaos that was to follow. It has been a lot of fun to perform but I have really enjoyed the learning curve of watching these international outfits at that level and constantly ‘gig ready’. It is a such a different and incredible form of music than the studio with a different skill-set and mindset; it has been really wonderful.”

The comparisons Suldusk has received have been above complimentary, so much so that it seems logical that these comparisons Emily receives to her idols will soon be considered her counterparts as her prodigal delicate heavy black folk formula is that mesmerising. One such example is that of California’s Chelsea Wolfe, a woman who has experimental with a diverse range of sounds through her musical output including doom metal, dark wave, gothic rock and more recently, she has returned to folk rock.

“Chelsea Wolfe is an artist that no matter what she does, it is always her, it is very genuine. There is a consistency with what she does because she knows who she is and it comes across in her music and the collaborations she has done. It is an honour to be considered as a similar artist.” Emily details further – “Marissa Nadler (Boston-based experimental songstress) has just done a new collaboration album under the moniker Drone Flower; it is definitely a lot heavier, but it is without a doubt her. She still brings her strengths and characteristics to the overall sound. I think my album has made a statement on intent of sorts for myself, this is where I kind of base myself, my sound and space.”

This last articulation from Emily is as accurate as it comes. Although she does have a “genre” of sorts attached to her artistic identity, this isn’t her official description. Each song on Lunar Falls could be reimagined in an array of different musical compositions from folk to black metal to even orchestral, namely the song “Aphasia”.

“I knew ‘Aphasia’ had potential to be more fully realised and that’s where Mark Kelson came in, he had that experience from working in European Doom Metal Bands (The Eternal, Cryptal Darkness) and knew how to add that grandeur factor to it. When I wrote it though, I knew it had the capacity to be epic from the original skeleton of the song, especially instrumentally. I think that’s the beauty and fun element of being in a studio, because you can try different things and add layers and textures, when it works it is SO exciting.”

Recently Suldusk has become a fully fledged band with multiple musicians joining Emily Highfield to round out the performance element. While there are shows booked coming into the new year, the focus is not in fact to tour, but unbelievably to craft and shape the sophomore full-length as songs have already begun haunting Emily’s gifted and dazzling mind.

“I’m very excited about the newer songs, I did have plans to tour but then I thought that we needed more material and I need to get these ideas I have out of my head! I have been losing sleep over these ideas I have and even though I have been riding a wave of good news and goodwill as this record has achieved more than I could have hoped for. I can only do that for so long though, I have to get back to the source and I need to make music again and make sense of these things floating around in my head haha.”

Emily Highfield might be riding the wave of good news, but Suldusk’s Lunar Falls has certainly changed tides the world over.