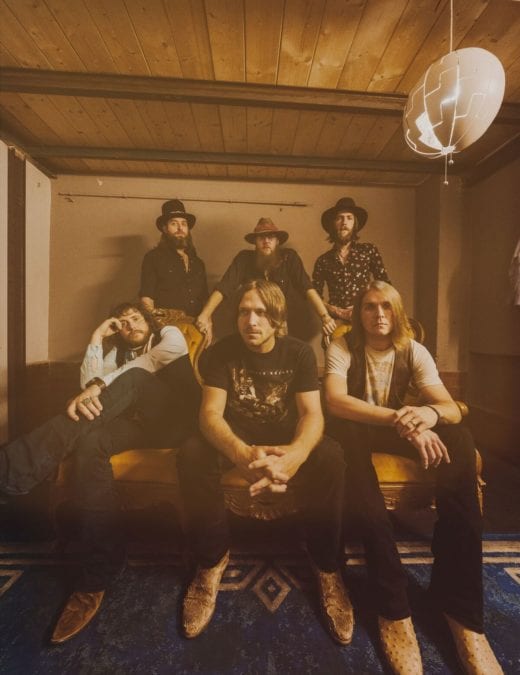 Whiskey Myers, the East Texas group whose music blurs boundaries and straddles a host of musical worlds, earned the first US Top 10 album of their career with their new self-titled / self-produced outing Whiskey Myers (out now via Snakefarm Records in the UK) debuting at #6 in the Billboard 200.

All in all, a significant achievement for these hard-touring musicians, whose critically acclaimed new album also amazed buyers with stunning ‘black light’ graphics on the LP & CD formats – graphics designed by Whiskey Myers guitarist John Jeffers and only revealed under UV light. You can view a demonstration here.

The new 14-track album successfully stretches the boundaries of genre just as the band themselves have done over the past 12 years, drawing as much inspiration from Nirvana as from Waylon Jennings – even adding the legendary McCrary Sisters’ gospel influence on background vocals.

Whiskey Myers follows the band’s 2016 release, the Dave Cobb-produced Mud [2016], which climbed to #4 on Billboard’s US Country Chart, before the group was featured in Paramount Network’s Kevin Costner hit TV series, ‘Yellowstone’, in 2018 – a development which propelled their entire catalogue into the Top 10 of the US iTunes Country chart. Whiskey Myers will appear in Season 2 of ‘Yellowstone’ with synced tracks throughout the season, and adding even further fuel to their fire, they recently guested with their heroes The Rolling Stones in Chicago and performed the new album track “Rolling Stone” on the TODAY show in the US which you can view here.

In the UK & Europe, Whiskey Myers have also seen their star very much on the rise, playing sold-out headline tours and appearing on a number of key festivals, including a main-stage appearance at the prestigious Download Festival (2018).

Further European touring is being discussed for 2020.

Watch the new Zack Morris directed video for “Gasoline” below.