Steve Vai is a man who needs no introduction…
Since first hitting the stage as a guitarist in 1978 he has played with and alongside bands and artists such as Frank Zappa, Whitesnake, David Lee Roth and Ozzy Osbourne, in the process earning himself an unrivalled reputation as the world’s premier guitarist.
After recently putting together Generation Axe – featuring himself, Zakk Wylde, Nuno Bettencourt, Yngwie Malmsteen and Tosin Abasi – Vai realised a personal musical goal, assembling the best of the best for a project that is as breathtaking as it is brilliant.

“It was different from many things that I’ve done in the past”, he measured, “but it’s always nice when you realise a dream and realise a fantasy. Creatively this was an idea that I had bounced around for many years but it just needed the right time and the right folks. Everybody loved the idea and came together and we did our first American tour and it went so well we did an Asian tour and that’s where we recorded the shows. I edited everything together and mixed it and we got the record and then did another North American tour and I have all of that recorded and sitting on the shelf but we’re really happy with the way it came out. It’s a really good sounding live record. It’s hard to mix crazy distorted guitars but I think it sounds good”.
Over four decades Vai has seen countless waves of styles and musicians come and go and smiles when recalling the magnitude of many different era’s. 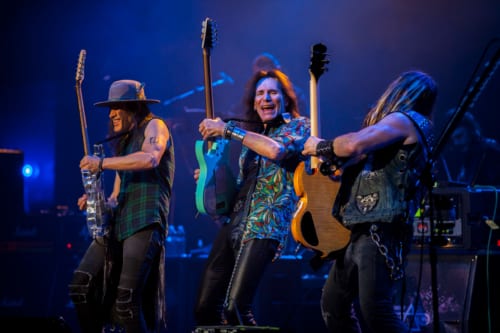 “The biggest change that I saw – because I was basically birthed in 1980 with Frank Zappa – and my guitar duties then were very different to they were with David Lee Roth. With Dave and Whitesnake, my job was to be that guy that fit the mould of the ’80s, and the ’80s was a great time for rock guitar. We were all influenced by those individual musicians of the ’70s like Jimmy Page and Brian May and Jeff Beck and Ritchie Blackmore, the list goes on, so in the ’80s the guitar was more in pop music – pop rock so to speak. Then when the ’90s came along the whole face of guitar playing in pop music just changed overnight, basically. Things like shredding were considered taboo in a lot of circles. There was a period of time in the ’90s where a guy like me was the poster boy for everything that was wrong about playing the guitar (laughs). One decade I couldn’t open up a magazine and not find extraordinarily wonderful things written about me and then the next I could not open up a magazine and see the worst things being said but then things changed and I kept sticking to what I enjoyed doing. History doesn’t remember those times in between trends”.
In the full interview Steve talks about the excitement of recording live, what he was looking for in guitarists when putting Generation Axe together, what attracted him to the chosen four, working out the arrangements for each guitarist, having five frontline guitarists sharing the stage at one time, how the craft of playing the guitar has changed in his time, different trends in guitar playing, the possibilities of an Australian tour and much more.