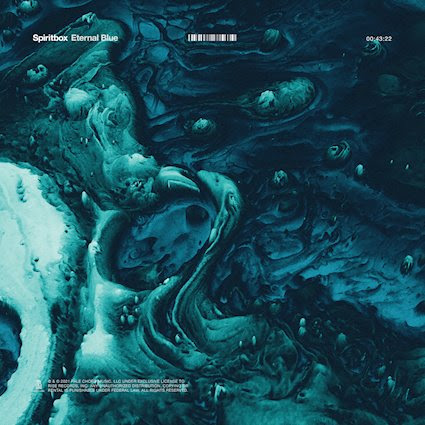 Virality is a strange thing.

The almighty algorithms, whether they be YouTube, Spotify, Apple Music, et cetera, seem to act as a prime mover of music culture of the 2010s and beyond, acting of their own accord but to some extent at the whims of the larger listening body.

But all too often, it seems as if this viral nature is short-lived without extraordinary talent and vision driving that potential forward. This year, though, through sixteen-plus months without live music, one enigmatic band has experienced a meteoric rise to prominence within the metal world.

Courtney LaPlante, Bill Crook and Mike Stringer meld uncompromising heaviness and intricate soundscapes to carve out a truly unique sound. Buoyed by the smash hit release of the leading single Holy Roller, Spiritbox rocketed from relative unknown to hot commodity seemingly overnight, and their brilliant debut record Eternal Blue only further cements their deserved spot at the top of their genre.

Eternal Blue as a whole is a record marked by layered, controlled chaos.

Sun Killer’s awkward, lurching intro falls beautifully into the first verse’s vocal arrangement- a haunting melody that cautiously meanders through the repetitive staccato backdrop. The stripped-down instrumental allows vocals and ambience to shape the flow of the track, a refreshing shift to metal minimalism.

This focus on allowing space for the music to breathe is a substantial part of what makes Eternal Blue so special.

The record has more than a few tracks that throw gut-punch riffs at you like you stole LaPlante’s lunch money in third grade, but there are an equal number of times where the most extreme route is consciously avoided for a moment of tenderness.

From the disgusting, arrogant heaviness of Holy Roller (if you haven’t heard it yet, stop right now and listen) to the almost poppy, spacious melancholy of We Live in a Strange World, Spiritbox explores the depth of mental struggle through this dual nature. The two sides mesh wonderfully to create a more complete work, one that refreshingly keeps listeners guessing where the sonic landscape will lead next.

Constance can bring you to tears, while Halcyon’s riffs can level a building. The depth and restraint clearly evidenced by the stylistic choices throughout Eternal Blue reveal a band confident as to who they are as artists, well beyond their “debut record” status. Melancholy, rage, loss, emptiness, beauty, contained in one blue package.

This record is the antithesis of compromise

Eternal Blue is a record greater than any one track, one riff, one melody. It feels entirely purposeful, fleshed out, with no holds barred and nothing left unsaid. An experimental juggernaut in a genre that can become a little samey, Spiritbox have created a record that will ripple and leave a lasting imprint on metalcore as a whole.

It is beautifully crafted, nuanced, and subtle, a body of work that deserves a front to back listen- many times over.