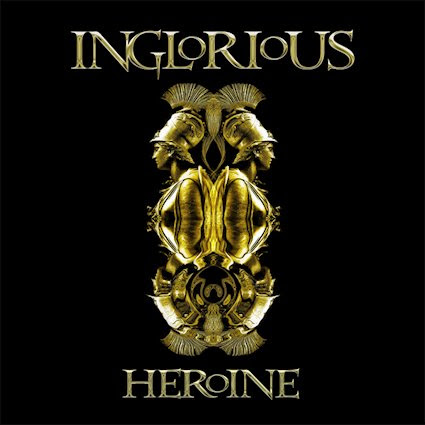 Once upon a time if a band announced it was releasing a covers album it meant one of two things. Either they had run out of original ideas, not looking at you Undisputed Attitude, or lazily seeing out a contractual obligation ala The Spaghetti Incident.

That is to say, they were usually forgettable, generic money grabs. Until Rick Rubin locked a 104-year-old Johnny Cash in a studio and didn’t let him out until he had nailed Soundgardens Rusty Cage.

The genius of Rubin’s elder abuse didn’t just inject life back into The Man in Black’s career, but also showed that there was still an audience out there for cover music. Just as long as those doing the covering made an effort to inject their own identity into it.

Which is where British hard rockers Inglorious come in with their new album Heroine.

Perhaps sensing that the world does not need another version of Knocking on Heavens Door they have instead jumped in the deep end and chosen to do 11 tracks from their biggest female influences. And when I say deep end, I mean deep.

No half arsed L7 autopilot renditions here, nope instead they have hand-picked songs from some of the most iconic singers of, not just rock, but (wait for it) all time. Don’t believe me? Check these names out.

Songs from artists closer to their own sound make an appearance too, Heart and Halestorm amongst them.

But let’s face it, as intriguing as all of this is, it really all hinges on one thing, can vocalist Nathan James do them all justice?

As if anticipating the question, Inglorious decide to kick things off with none other than Whitney Houston’s Queen of the Night. A funkier more hard rocking version for sure, but more importantly James dispels any doubts as to his ability to pull this off.

With confidence high we move on to Barracuda and get a glimpse of what a Robert Plant fronted Heart would sound like, (spoiler alert) it sounds fucking fantastic.

Miley Cyrus then gets the Inglorious treatment, before Tina Turner and her perennial jukebox stomper Nutbush City Limits gets a straightforward yet very effective work over.

Evanescence’s Bring Me To Life is a faithful re-telling by the lads, and then they add some musical muscle to Christina Aquileras’ Fighter.

Avril Lavignes’ I’m With You truly benefits from a stronger vocal approach.

Then it’s on to the Joan Jett song that plays in my mind every time I stare into the empty arse end of a Jagermeister bottle, I Hate Myself For Loving You.

I Am the Fire is then unleashed, and it says a lot about Lizzy Hale and Halestorm that even in such illustrious company, this is the one track that really seems to stretch the whole band from front to back. But they pull it off admirably before pausing for breath with Cyndi Lauper‘s Time After Time, a scaled back version that showcases James’ voice perfectly.

Then the swansong is delivered, Uninvited by Deadpools ex, Alanis Morissette. Inglorious give this song a drama and depth not heard in the original. Taking into the kind of territory normally inhabited by Mark Tremonti‘s darker epics.

It is a stupendous way to sign off on a wonderfully ambitious project.

And while the entire band needed to bring their A game, this couldn’t have worked without a singer who has, not just the voice, but also the confidence to take this on and the swagger to pull it off.

I’ll be honest with you, my hopes were not high when I saw the track listing. But until Rick Rubin kidnaps Bob Dylan and makes him do a version of South of Heaven, Heroine will remain my cover album of choice.