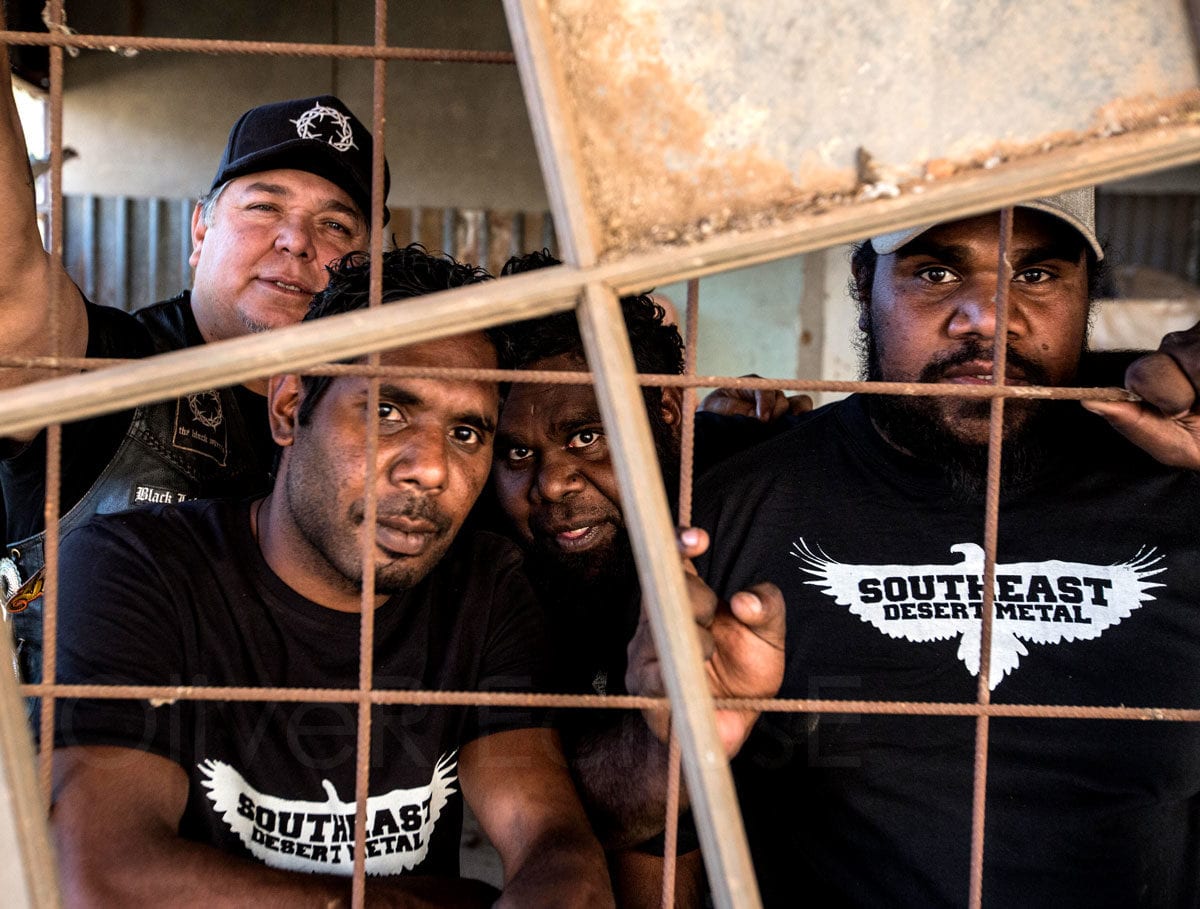 Music often imitates life in that a bands sound is generally a product of their environment.

Every harsh reality is transferred into a feeling that resonates long after the final chord or vocal line is spat in anger, and every subtle moment of beauty captured in a timeless art form that stamps your musical footprint on a society that is becoming increasingly throw away.

Southeast Desert Metal epitomize this belief with a ferocious brand of heavy music that is sculptured by and a product of the unforgiving landscape that makes up Central Australia.

Hailing from Santa Teresa, near Alice Springs, Southeast Desert Metal are not merely a group of musicians so much as an ambassador for the very fabric that helped shape modern day society.
Rightfully dubbed the most isolated metal band in the world, vocalist and guitarist Chris Wallace agrees with the sentiment.

“We’re pretty isolated”, he laughed. “We’re from the Simpson Desert, Southeast of Alice Springs, about 80 kilometers out in a small, remote community”.

Despite their remote status, Wallace says music was a solid foundation in the upbringing of much of the community, with other bands paving the way for his band’s growth.

“We just wanted to try a different angle”, he shrugged. “There are local bands back here in Central Australia but they all seemed to be playing the same style of music and we wanted to look at another angle and play metal. The fellas and I are all into bands like Iron Maiden and AC/DC and we wanted to be more like them”.

With limited opportunities because of their geographical position, Southeast Desert Metal knew they were facing an uphill battle in taking their music to the broader population but Wallace says a small matter like that was never going to be an impediment.

“Yeah it was real hard”, he agreed, “but we had a lot of support along the way. We played a few festivals back home like Blacken and the Bush Bash Music Festival as well as pub gigs. That’s pretty much how we got our music out there and it just grew from there”.

As chief songwriter for the band Wallace tackles real-life issues without reproach, focussing on Aboriginal culture and dreaming, mixed with more personal issues about struggles and influences that impact the Aboriginal way of life. While sometimes dealing with negative issues that face all of society, Wallace strongly believes that his music is as much educational as it is escapism.

“I’m just trying to pass a message on to the younger generation”, he stressed. “One man, two worlds is probably a better option. It’s more of an education so it’s good to get it out there and I think it’s working. We’ve got a lot of young fellas out there and they are a younger generation that wanna play metal now and wanna change their music style. Yeah, I think we’re getting the message across”.

After debuting with their self titled album in 2015, Southeast Desert Metal followed that up with Break the Silence last year, further enhancing their growing reputation. They are currently midway through a promotional tour in support of the album, with Wallace saying the band is enjoying their time on the road.

“We’ve got eight more shows to go”, he enthused. “It’s been pretty awesome so far. We’ve got a few days off after our Sydney show last night and then we’re off to Tassie and Victoria. After that, we’re planning to go on another tour in the South of Western Australia at the Nullabor Festival and then to Adelaide so there’s still a few shows ahead of us. I think we’re aiming at the Top End after that so we’re gonna be busy”.