SLEEPMAKESWAVES and ROSETTA at Adelaide UniBAR, Adelaide on 6/12/2017 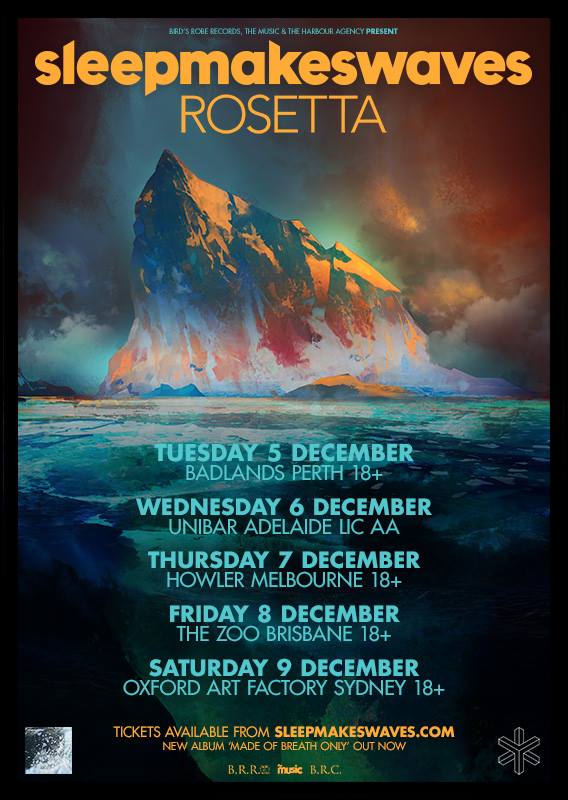 It was unfortunate that music aficionados of South Australia were hesitant to embrace this Academy Award-winning actress’ advice on this night; understandably it was a Wednesday night, furthermore, the musical presentation on offer was in probability, a little eschew. It has been said that stepping out of one’s comfort zone is the best way to make the most of one’s time, and for the eventual dozens of music adorers who ventured to this iconic venue, they were privileged to witness a progressive, even slightly bizarre artistic exhibition of illustrious calibre.

To begin this mystifying voyage, local three-piece Last Days Of Kali exhibited their profound ability to transport their observers to another domain through their soundtrack of post-rock. Featuring a skeletal line-up of just a guitarist, synth and drummer; the trio possesses a chemistry stronger than an ionic bond which creates a varying emotional tempo and ultimately “trance” like state for their onlookers. A new song entitled “Stainless” from LDOK’s forthcoming debut album due in 2018 was a particular highlight, essentially displaying a prowess and intricacy similar to England’s 65daysofstatic.

The sole international touring band at this remarkable event was Philadelphia’s Rosetta. In short, this quintet is an amalgamation of everything they adore both musically and in their leisure pursuits, more specifically astronomy and space travel. Landing somewhere between post-metal, post-rock, blackgaze and avant-garde metal; the best description this writer can associate with this five-piece’s art would be if a prehistoric species of Spinosaurus were found on a distant planet and documented on film, Rosetta would without a doubt provide the perfect soundtrack. A hint of France’s Alcest blended with Boston’s ISIS is a fair comparison, but Rosetta seems to be more menacing, discerning and mathematical in delivery. Including songs from most of the outfit’s outstanding discography, including cuts from their recently released brilliant opus Utopioid, the band were consistently engaging, chaotic, eloquent and destructive. Most notably, vocalist Michael Armine who utilised the barrier as a climbing apparatus to scream his stories into the faces of his devotees (even removing himself entirely off the stage and immersing himself in the audience during their final song); however the remaining members all provoked minor earthquakes with their live intensity. It had been five years since Rosetta’s last live appearance, can they please return as soon as their “space travel” allows them too?

Although far from a capacity turnout, there was a rapturous positivity in the venue for the headliners, particularly with the intimate setting. A gracious yet prominent entrance and introduction captured the crowd from the get-go and the elegant audio waterfall and visual vivacity that is Sleepmakeswaves encompassed Adelaide UniBar. The quartet’s capacity to float effortlessly between post-rock, psychedelic rock, post-metal, experimental rock, instrumental hard rock and even elements of indie-alternative is mesmerising. This diversification of musical genres is further emphasised by the four-piece’s clear adoration in playing live, each member feeds off the other in an epileptic fit of insanity when the band is in full flight; to simplify, Sleepmakeswaves puts the “mental” in “instrumental”. “Emergent” was a progressive wonder, “Great Northern” embraced an infectious dance element and “The Stars Are Stigmata” exhibited an almost acrobatic spectacle for all the senses. SMW seems to almost operate like a pack of dolphins, who gracefully navigate the ocean and hunt together to survive, but in their adventures they revel amongst the waves in complete bliss and ecstasy. This notion was heightened by the outfit’s cover of Robert Miles’ “Children” as their encore, a stunning conclusion to an “aspirational” night.