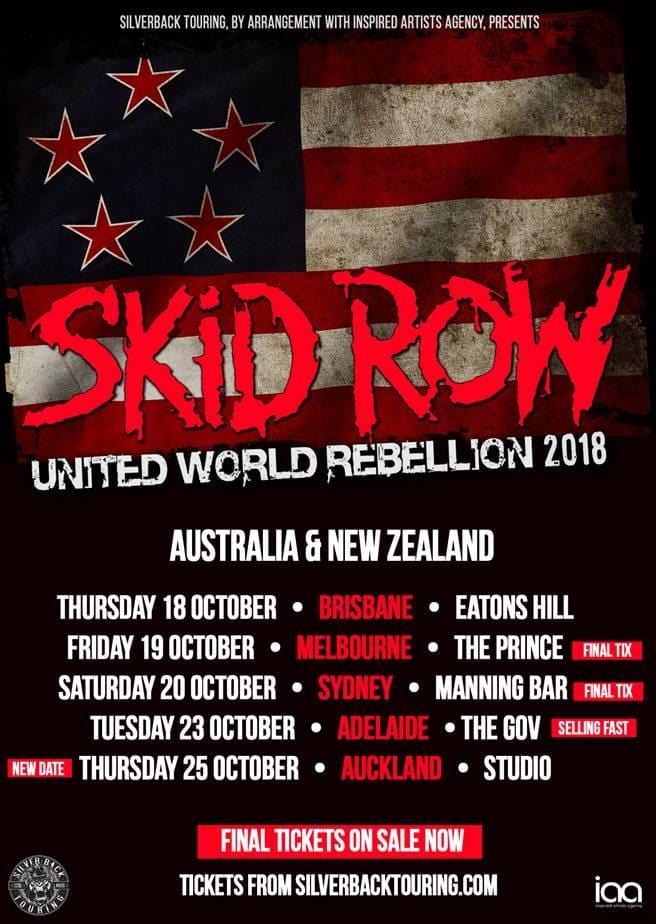 Massive apologies to REDSTARBORN, who opened proceedings at Skid Row‘s first show of their Australian tour in Brisbane last night.
I’m not going to make excuses – I just turned up late – but from what my spy in the crowd told me it was to my detriment. Luckily the boys from the band threw me a copy of their E.P Dead Philosophy to listen to on the way home, or were they just rubbing it in?
The Gold Coast locals are putting the finishing touches on their debut full-length album which will is scheduled for release later this year so don’t be a putz like me and miss out, check them out for yourselves. On the basis of the E.P it was definitely my loss on the night.

Next up was punk outfit The Kids who attacked the stage with all the youthful exuberance of… well… kids. I last saw these guys support L.A Guns in May and although I was impressed at that outing The Kids reaffirmed my initial analysis with an energetic set laced with old-school punk, mixed with a bit of thrash and a bit of Rage Against the Machine style angst for good measure.
In the space of five months the improvement in the band was noticeable, with a more confident stage presence meaning the delivery of the songs came across more as if they owned them rather than played them.
With a splattering of originals and covers, The Kids are to be taken more seriously than their name suggests and if they keep improving like they are then they could be anything.

Bad Moon Born were up next, with vocalist Frank letting out an almighty scream in the intro to first song “Promised Land” that resonated through the smaller than it should have been crowd.
With dueling guitars and a tight rhythm section, Sydney’s Bad Moon Born displayed a professionalism and performance befitting the main act.
Their cover of “Immigrant Song” by Led Zeppelin was as close as you could get to the real thing and their originals had a zest and vitality that left a lasting impression, especially new single “Alive” which was their best-received song of the night.

I must admit that ever since Sebastian Bach left Skid Row I have only given the bands music a passing listen, adamant that no-one else could pull off the prolonged notes and charisma of the original frontman, especially live.
Seeing I had never seen the band perform – with or without Bach – I probably had no right to be so judgemental and from the moment new vocalist ZP Theart swept onto the stage and launched straight into “Slave to the Grind” that sentiment was justified.
No, he wasn’t like Bach, but he didn’t have to be. He sung the songs as they should sound, stamping his own influence on songs that were a large part of most of the crowd’s youth.
Not a lot of bands can survive a changing of the guard out the front, especially those with a vocalist as soothing yet confronting as Bach, but the ones who have prospered are the bands and vocalists that aim to create their identity.

Theart does just that.

He has the swagger, the voice, the showmanship, and the attitude required to front a band like Skid Row and in his first show with the band on Australian soil, he did not disappoint.
Following up with “Sweet Little Sister” and “Piece of Me” it wasn’t until after the third song that Theart addressed the crowd and even then it was more a way of breaking the ice rather than trying to justify his position.
All of their hits were there from “18 and Life” to “Youth Gone Wild” and crowd favorite of the night “I Remember You” but for me the highlight was “Monkey Business”, and in particular the mid-song jam which saw each member share the limelight with solos and riffs that showed the band was enjoying themselves on stage just as much as their fans were out the front.
Original members Dave ‘The Snake’ Sabo (guitar) and Rachel Bolan (bass) both addressed the crowd and gave a heartfelt thanks to all in attendance for their support over 30 years.

If anyone is sitting on the fence for the same reasons as I was, get over yourself and head to one of the shows. That is if you are prepared to face the fact you were wrong.