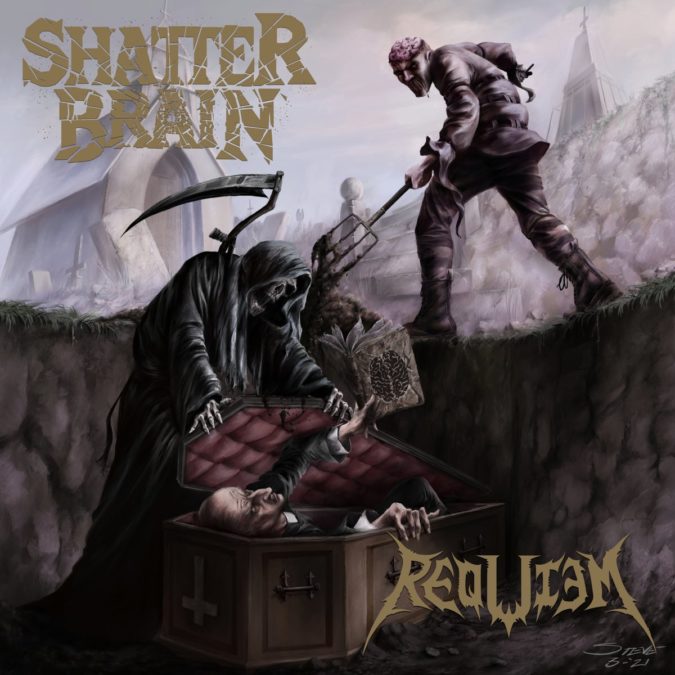 Split releases can generally go one of two ways.

Either they are put together by two bands out to make a quick buck while they tide fans over until a new full release, or they are approached as a lasting work of art to be proud of and held in equal regard to their back catalogues.

It doesn’t take long to figure out which of the two the split EP from Shatter Brain and Requiem falls into.

Adelaide metal outfit Shatter Brain entered the studio for this with the intent of pushing themselves to achieve the fastest and heaviest live takes they could muster and, despite not being familiar with their previous work, I would say they have nailed it.

After introducing their sonic intensity to the world on Pitchfork Justice last year, Shatter Brain have plunged themselves into these three tracks, wasting no time with the first song and single, Root Of All Evil.

Piercing the silence with an almighty scream over wailing guitar and frenetic drums, Root Of All Evil immediately engages the neck muscles, forcing them into spasmodic and violent outbursts that exit through the inevitable headbanging motion subconsciously created.

From the outset the musical mastery of Shatter Brain combines on all levels, each instrument breathing its own fire amid a combination of screams, growls and cleaner vocals that spit menace and violent intent.

Internal Witness opens with a sweeping extended guitar intro that soon descends into chaos, with vocalist Tom Santamaria again showing the diversity in his range that is accentuated by well-placed gang vocals for affect. The impressive aspect to all three songs, but particularly evident on Internal Witness, is the way every instrument is given breathing space despite the ferocity of the music. A good friend in the industry once told me that music is often more about what you leave out than what you put in, and that statement makes much more sense after listening to these three songs.

The final song from Shatter Brain quickly dispels my fears that the trusty power ballad would rear its ugly head. With only three songs to showcase the band, you would hope they leave nothing in the tank but these days you never know…

From the moment the ominously heavy guitar intro kicks in you know Shatter Brain have saved something special for last and Bury The Remaining God delivers on all fronts. An aggressive, well-structured slab of everything that we love about metal showcases every side of Shatter Brain’s musical psyche and leaves the bar at an almost impossibly high level for Requiem to follow with their three contributions.

You can almost feel the Victorian thrashers mouth “challenge accepted” as they launch into Cruelty Of Time, with guitars screaming and menacing vocals that grip straight for the jugular and quickly tighten the vice to breaking point.

Featuring a blistering guitar solo mid way through that momentarily takes the boot from your larynx, allowing precious air to seep back into your lungs, Requiem push the needle straight back into the red with a renewed ferocity that proves they, too, have approached this split release with the right intent.

Funeral March shows more musical intricacies from Requiem, with thunderous drums and piercing guitars leading you down the next dark path of Requiem’s subconscious.

Clever sparing use of demonic style vocals accentuate the point, with anything to do with a funeral never sounding this good.

Requiem’s closing track of the short set, Reap What We Have Sown, again thankfully avoids the ballad temptation, instead providing a thrash monster of a song featuring all the ingredients you know and love about thrash metal – and possibly then some.

A wall of sonic intensity smashes you between the eyes before exiting the previously non-existing hole in the base of your skull, with subtle tempo changes adding a freshness and vibrance to a genre that has produced some of the great metal bands in history.

Neither band is breaking incredibly new territory on this EP, but neither band claims to be.

Heavy metal in Australia is assuredly alive and well in this country ladies and metalheads, and two of Australia’s brightest rising stars are on display on this split EP to prove it.